On January 4, 2017, 105-year-old Robert Marchand rode his bicycle 14.01 miles to set the world record for his age for the one-hour ride.  He rode 92 laps at the Velodrome National near Paris and as he completed his ride, the fans gave him a standing ovation, chanting "Robert, Robert" while dozens of TV crews and cameramen captured the moment.
When he was 102, he rode 16.73 miles in one hour to set the world record for men over 100.   No one over 100 had ever recorded riding that distance before him, and the record still stands.  Most 20-year-olds cannot average anywhere near his 16.7 miles per hour for one hour.  A scientific review of world records in many different sports by people over 100 calls Marchand's one-hour-track-cycling the "best sports performance ever achieved by a centenarian" (Age Ageing, Nov 3, 2016;45(5):729-733).  It is an incredible 50.6 percent of the current world record for that event for any age of 33.88 miles set by 35-year-old Bradley Wiggins in 2015.

His Life Story
Marchand was born in 1911 in a small town in France.  As a teenager, he was told that at five feet and 110 pounds, he was too small to be a bicycle racer, so he gave up cycling and worked as a firefighter near Paris. In 1946, at age 35, he finished seventh in the Grand Prix des Nations.  He emigrated to Venezuela and worked as a truck driver, then moved to Canada and worked as a lumberjack.  In the 1960s, he returned to France and worked as a gardener and wine dealer until 1987.
At age 68, he started to ride his bike regularly and his determination and talent started to shine. He rode from Bordeaux to Paris and Paris to Roubaix many times, and in 1992, at age 81, he rode from Paris to Moscow. At age 100, he set the age group world record by riding 100 kilometers (62 miles) in 4 hours and 17 minutes at an average speed of slightly more than 14.3 mph, and also set the world record in the one-hour ride for men over 100. In January 2014, he broke his previous world record by going 16.69 miles in an hour, and on January 4, 2017, he set the new world record for men over 105 years old.  He now lives in a small apartment near Paris on a meager pension of 900 euros ($940/year).
Reasons for His Greatness
Marchand chose his parents wisely, exercised regularly all his later life, never smoked, has never been overweight, drank alcohol only on occasion, eats primarily a plant-based diet, goes to bed at 9 PM and gets up at 6 AM, reads a lot and watches TV only for the Tour de France.  Most importantly he never competed at a world-class level, so he never had to take the drugs that had become necessary to succeed in bicycle racing.
How Drugs have Ruined Competitive Cycling
Anabolic steroids and human growth hormones enhance cycling performance so much that athletes who do not take them can't compete successfully against those who take them.  All athletes in sports that require endurance have to do prodigious amounts of training.  They know that you can't make a muscle stronger unless you damage that muscle with intense exercise and that when it heals, it becomes bigger and stronger.   You can't increase the maximal amount of oxygen that you can take in and use unless you train intensely enough to become severely short of breath.  All athletes train by taking very intense workouts on one day and damaging their muscles and then feeling sore on the next day and going at a less intense pace until their muscles recover.  Most athletes can take two or three intense workouts a week with easier recovery workouts on the other days.  However, anabolic steroids and human growth hormones help athletes to recover much faster.  An athlete who previously took two or three days to recover from a specific workout can often ride intensely on the very next day.  Shortening of recovery time causes incredible improvement in sports performance and the athletes all notice this very soon after they start taking these drugs.  Cyclist Greg Lemond learned this when he was the reigning defending Tour de France champion and the best bicycle racer in the world. His VO2max of 92.5 was among the highest ever recorded by an athlete.  He came back the next year and was beaten by racers he had beaten easily the previous year.  He was not riding slower; they were riding faster because they had all started taking drugs.
Anabolic steroids come with a steep price: increased risk of tendon damage, liver abnormalities and tumors, increased risk for heart attacks even many years later, high blood pressure, high cholesterol, rage, violence, depression and more.
Human growth hormones cause the heart muscle to enlarge without concomitant enlargement of the nerves supplying the heart muscle. This can lead to irregular heartbeats and sudden death, even many years after taking the drugs.
Today athletes can still cheat because the rules allow athletes to get away with taking low doses of testosterone, cortisones and EPO that are considered to be "natural" hormones.
How Much Do You Lose with Aging?
Athletes in most sports can compete at their best up until 35 or 40 years of age and then their performance deteriorates by about 10 to 15 per cent per decade (Age Ageing. Nov 3, 2016;45(5):729-733).  Marchand's performance has deteriorated by less than eight percent per decade for more than 60 years.
Marchand's superb athleticism comes from a heart that is so strong that it can pump huge amounts of blood with each beat.  He has a maximum heart rate of 140, equal to that of a fit man thirty years younger.  Sports performance is limited by aging because maximal heart rate declines with age. The best measure of sports endurance performance is called VO2max, the most oxygen a person can take in and use per time.  I do not have Marchand's VO2max, but Ed Whitlock, the most-awesome older-marathon runner of all time, has a VO2max of 54, much greater than that of most athletes in their twenties and thirties.
Ed Whitlock's Story 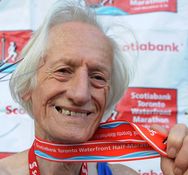 Aging slows athletes in running and swimming far more rapidly than those in throwing and cycling events.  Canadian Ed Whitlock was the first person over 70 (at age 73) to run a marathon in less than three hours (2:54:48).  A review of world records for running shows that his time adjusted for age is equivalent to running a marathon in a person's prime in 2:04:48, less than two minutes off the present world record of 2:02:57.  As a schoolboy in London in the 1940s, Whitlock ran a mile in 4:34 and then stopped running.  He took up running again in his 40s.  At age 48, he ran his fastest marathon, in 2:31.  On October 17, 2016, at age 85, he ran the Toronto Waterfront Marathon in 3 hours 56 minutes 34 seconds to become the oldest person ever to run 26.2 miles in under four hours. Whitlock died at age 86 of prostate cancer.
In my opinion, Robert Marchand is the most incredible senior athlete of all time and Ed Whitlock is a close second.
Inspiration from Marchand and Whitlock
• A regular exercise program can help to prevent disease, prolong life and improve quality of life in your later years.
• Everyone should try to do some form of exercise every day, unless there is a compelling reason not to do so.
• Try to go a little faster or more intensely on one day and slower on the next.
• It is normal for regular exercisers to feel soreness when they get up in the morning.
• If your muscles do not lose their  soreness and stiffness after you have warmed up for 5-10 minutes, take the day off.
• If you feel increasing pain or discomfort in one area during exercise, stop exercising immediately.  Your body is telling you that you are headed for an injury.
• Normally your muscles feel fresh after they are warmed up and you are moving through a workout.  When your muscles start to feel tight and heavy during a workout, stop for the day.
Robert Marchand
(born 26 November 1911)
Ed Whitlock
March 6, 1931) – March 13, 2017
.

Lack of Fitness is Worse Than Prolonged Sitting

Resistance Exercise Becomes Even More Important As You Age

All Exercisers Can Benefit from Elite Training Methods

Can Intense Exercise Increase Your Risk for a Heart Attack?