Aging causes you to lose strength, no matter how much you exercise. Muscles are made up of hundreds of thousands of individual fibers, like a rope is made up of many strands. Each muscle fiber is innervated by a single motor nerve. With aging you lose motor nerves, and with each loss of a nerve, you also lose the corresponding muscle fiber that it innervates. Thus, for example, the vastus medialis muscle in the front of your thigh contains about 800,000 muscle fibers when you are 20, but by age 60, it probably has only about 250,000 fibers. However, after a muscle fiber loses its primary nerve, other nerves covering other fibers can move over to stimulate that fiber in addition to stimulating their own primary muscle fibers. A regular exercise program can help to slow the loss of muscle fibers and improve mobility (Physiol Rev, Jan 1, 2019;99(1):427-511). 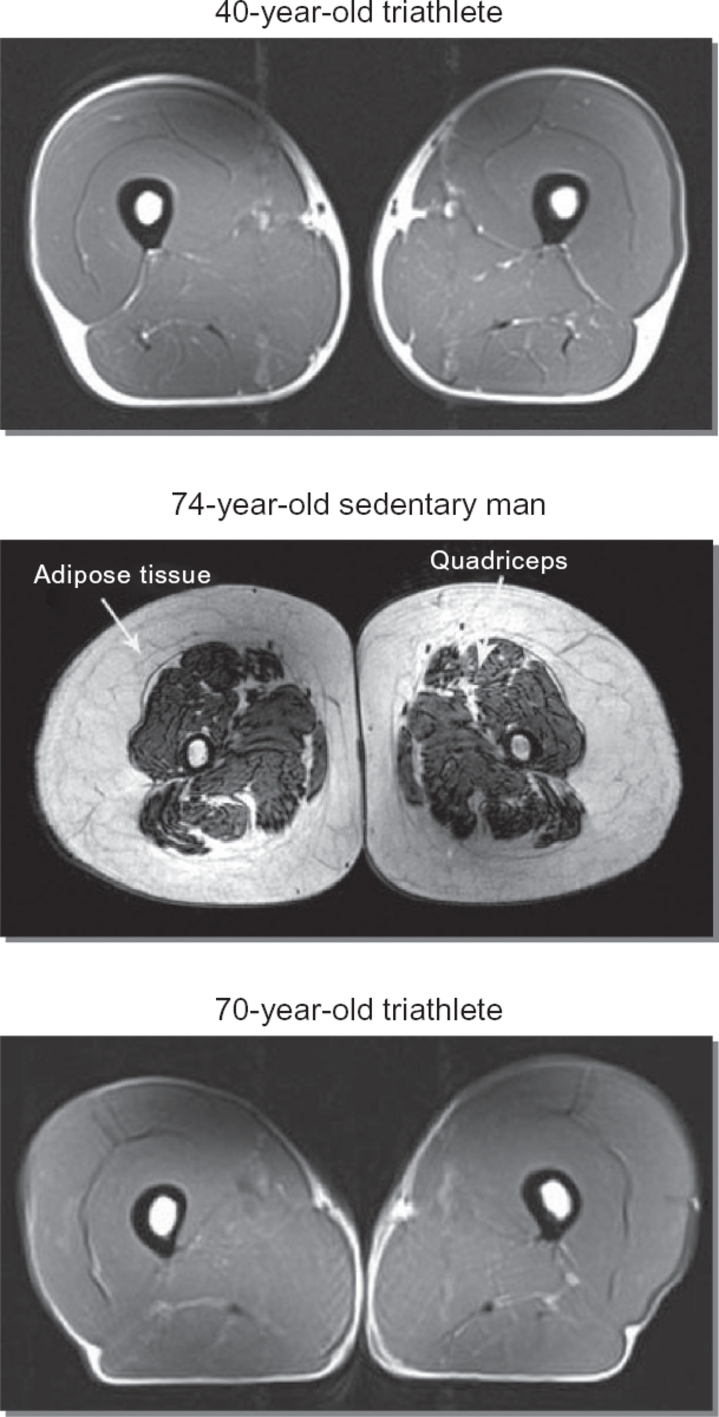 Sarcopenia Linked to Inflammation
Recent research suggests that one cause of sarcopenia may be inflammation. Older people who suffer from severe sarcopenia are far more likely to have high levels of the markers of inflammation, measured with blood tests such as CRP, SED rate and adiponectin (Aging Clinical and Experimental Research, August 2017;29(4):745-752). Sarcopenia of aging is found with other conditions associated with inflammation, including:
• having excess body fat (J Gerontology A Biol Sci Med Sci, 2011;66:888-895; Curr Gerontol Geriatr Res, 2012;2012:216185)
• eating a pro-inflammatory diet that raises blood sugar levels (J Gerontology A Biol Sci Med Sci, Jan 2012;67A(1):74-81)
• being diabetic (Med J Aust, 2016;205(7):329-333)
• having low vitamin D levels (Molecular Aspects of Medicine, Dec 2008;29(6):407-4140)
• not exercising
• having any chronic disease

Your immune system helps to heal wounds and to protect you from infections, but it is supposed to dampen down after an infection has passed or an injury has healed. If your immune system stays overactive, it can use the same cells and chemicals to attack your own tissues, which is called inflammation. It can punch holes in arteries to start forming plaques that can lead to heart attacks, it can damage the genetic material in cells to increase risk for cancers, and it can accelerate the loss of nerves to cause debilitating muscle weakness. An overactive immune system can cause muscle cells to break down through loss of energy-producing mitochondria and increased cell death (Clin Calcium, 2017;27(1):45-52; Int J Mol Sci, Apr 12, 2010;11(4):1509-26).

If inflammation is a major cause of sarcopenia, treatment should include exercise, which decreases inflammation by dampening down your immune system. Competitive masters athletes, 40 to 80 years old, who train four to five times per week, lose far less muscle size or strength than their non-exercising peers (The Physician and Sportsmedicine, October 2011;39(3):172-8). Eighty-year-old men who still compete in sports have been found to have more muscle fibers than inactive younger men (Journal of Applied Physiology, March 24, 2016). At this time the most effective way to decrease the rate at which you lose muscle size and function is to exercise regularly.

Inactivity Causes Rapid Loss of Muscle Size and Strength
If you inactivate a leg by putting it in a cast, you lose a significant amount of muscle size in just four days (Nutrition, Acta Physiol (Oxf), March 2014;210(3):628-41). Prolonged periods of inactivity due to bed rest, injured nerves, casting or even decreasing the force of gravity cause loss of muscle tissue which leads to insulin resistance, higher blood sugar levels and increased risk for diabetes (Med Hypotheses, 2007;69(2):310-21).

My Recommendations
If you are not already doing strength-training exercise, first check with your doctor to make sure you do not have any condition that may be harmed by exercise. Then join a gym and ask for instructions on how to use the weight-training machines. You gain strength and increase muscle size by exercising intensely enough to damage the Z-lines in muscle fibers and when the Z-lines heal, the muscle is stronger and larger. You get z-line damage whether you lift and lower a heavy weight a few times or lift and lower a much lighter weight many more times. Resistance exercise can increase muscle size and strength in older people (Med Sci Sports Exerc, 2011;43 (2):249-58), but with aging you need to work much longer to gain the amount of strength that a younger person would get with the same program (Med Sci Sports Exerc, 2011;43(2):249-58). Since lifting lighter weights many times is less likely to cause injuries, I recommend lifting lighter weights with more repetitions. End the workout immediately if you feel severe pain or if you have pain that does not go away as soon as you stop lifting the weight.
See: Strength Training Guidelines
Retaining Strength with Aging
Weight Lifting for Middle-Age and Beyond

Lack of Fitness is Worse Than Prolonged Sitting

Resistance Exercise Becomes Even More Important As You Age

All Exercisers Can Benefit from Elite Training Methods

Can Intense Exercise Increase Your Risk for a Heart Attack?