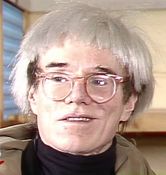 Andy Warhol used painting, silk screening, photography, film and sculpture to become perhaps the most famous artist of his time and to dominate the American market with his Pop art in the 1960s.  His paintings were incredibly expensive, with his 1963 painting  "Silver Car Crash (Double Disaster)" selling for $105 million.  He painted portraits of some of the most famous and richest people in society: the Shah of Iran Mohammad Reza Pahlavi, his wife Empress Farah Pahlavi, his sister Princess Ashraf Pahlavi, Mick Jagger, Liza Minnelli, John Lennon, Marilyn Monroe, Elvis Presley, Marlon Brando, Troy Donahue, Muhammad Ali, Elizabeth Taylor, Diana Ross, Brigitte Bardot and  Mao Zedong. He also started and managed the rock band "The Velvet Underground", founded "Interview" magazine and wrote many popular books.
Many times he stated that one of the reasons America is great is because the poorest Americans can buy and use the same commercial products and have the same heroes that the richest Americans admire. In the 1960s, Warhol began painting dollar bills, Campbell's Soup cans, Coca-Cola bottles, and many other commercial products.  His unique style is widely recognizable.
He Died of a Heart Attack at Age 58
In 1987 at the very young age of 58, he died of a heart attack after having had his gall bladder removed by one of the leading surgeons in a prestigious big-city hospital.  On Feb 19, 2017, thirty years after Warhol's death, Dr. John Ryan, former chief of surgery at Virginia Mason Hospital in Seattle, presented a paper on Warhol's death at the annual meeting of the Pacific Coast Surgical Association.  He found that Warhol was at high risk for dying after surgery because he:
• had 15 years of serious gall bladder disease
• was likely to be genetically susceptible to gall bladder disease because his father also had his gallbladder removed
• was so afraid of hospitals and surgery that he did not seek medical help for more than two months of continuous heavy vomiting and severe belly pains.  At surgery, he was severely dehydrated, malnourished, frail and anemic and weighed only 128 pounds in his 5'11" frame.
Three days before his surgery, Warhol visited a famous surgeon and asked him not to hospitalize him, saying "I will make you a rich man if you don’t operate on me."  The surgeon felt that his gall bladder was close to rupturing, which would have killed him.  At surgery, the gall bladder was  gangrenous and broke into many pieces in the surgeon's hands.
He was at high risk for a heart attack because he already had a damaged heart.  In the third grade, he developed Sydenham's chorea from a strep infection.  At that time (1936), penicillin was not available so the infection damaged his heart and his nerves to cause him to shake and have poor coordination.   He was confined to his bed and his mother encouraged him to draw pictures which was good, but he also developed a paralyzing fear of hospitals and doctors.  He took amphetamines regularly for many years, and constant use of amphetamines can damage the electrical system that controls the heart rate.
Nearly Murdered 19 Years Earlier
In 1968, he was shot by a disturbed feminist writer, Valerie Solanas, who wrote  the "S.C.U.M. Manifesto" advocating that all men should be removed from society.  She asked Warhol to produce a film based on the flimsy manuscript.   When he refused because he felt that it was too obscene, she asked him to return the manuscript. When he couldn't find the manuscript, she shot him and claimed that "Warhol had too much control over my life."  She was diagnosed as a paranoid schizophrenic and sentenced to only three years in prison.
He lost so much blood that his heart stopped beating and he was declared dead.  Surgeons cut open his chest and massaged his heart to revive him  He was bleeding so profusely that he had to be given 12 units of blood.  An average male has fewer than 10 units in his entire body. The surgeons had to sew up his damaged lungs, esophagus, spleen, liver and stomach, and he was kept in the hospital for two months.  He spent the rest of his life vomiting and with difficulty swallowing because his intestines were damaged and his belly muscles were widely split by the bullets and surgery to save his life. The split in his belly wall was so large that he had to wear tight girdles for the rest of his life.  On the day before he died, the surgeon had to do extra surgery to repair his ruptured belly wall after he removed Warhol's gall bladder.
His Death and Legacy
The evening after his gall bladder surgery, Warhol appeared to be recovering as he made many telephone calls in his room.  A nurse's report showed that he was fine at 4 AM the next morning.   At 6:00 AM, the nurse found him without a pulse and not breathing and attempts to resuscitate him failed.  He had died from ventricular fibrillation in which his heart quivered, rather than doing its job of pumping blood through his body.
At the time of his death, he had so many personal possessions that Sotheby's had to keep its auction open for nine days and sold them for more than $20 million.  The proceeds of his entire estate went to creation of the Andy Warhol Foundation for the Visual Arts.
The Andy Warhol Museum, in his hometown of Pittsburgh, is the largest museum devoted to a single artist in the United States.
Andy Warhol
August 6, 1928 – February 22, 1987