Arnold Palmer was called “The King” because he was considered to be among the world’s greatest and most popular golfers of all time. From 1955 to 1973, he won 92 national and international championships, with 62 of them on the U.S. PGA Tour. In 2004 at age 75, he gave President Bush golf tips before being awarded the Presidential Medal of Freedom. He also designed more than 300 golf courses in 37 states, 25 countries, and five continents. At the time of his death, his multiple business ventures left him with a net worth of $875 million.

On Sept 19, 2016, Palmer was hospitalized, most likely for bypass surgery to increase blood flow to his heart, and he died of heart failure on Sept 25, 2016. Heart disease is the major killer of North American men today, and exercise markedly helps to prevent heart failure. Top level golf requires more than just coordination; it requires tremendous strength to drive a golf ball a great distance. Other professional golfers, including Gary Player, Greg Norman, and Tiger Woods, are avid weightlifters. Increasing strength can improve golf scores (International Journal of Golf Science, 2020;8(1)).

A History of Poor Lifestyle Choices
How could one of the world’s greatest and most famous athletes die of heart failure, a disease that is caused largely by an unhealthful lifestyle? There may have been a genetic component, since his father died at the age of 71 of a massive heart attack after playing 27 holes of golf. However, Palmer had several poor lifestyle habits in his lifetime:
• Cigarettes. He smoked one to two packs of cigarettes per day for about 15 years at the height of his professional career. He even made several television commercials endorsing cigarettes. In 1964, the Surgeon General’s report encouraged him to start on the long fight to give up cigarettes and he urged the public to give up smoking because “Cigarette smoking has a negative effect on every organ in the body.”
• Alcohol. He was a modest drinker of alcohol and he believed that it was safe to take one or two drinks a day. However, the recent literature shows that alcohol does not prevent heart attacks and there is no safe amount of alcohol. Even small amounts can increase risk for heart attacks and cancers. 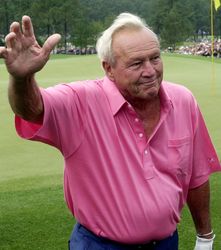 • Overweight. If you look at his pictures over the years, you will see a very fit and slim athlete turn into a heavy person with a protruding belly. He talked about having a healthful diet with vegetables, fruits and nuts and avoiding fast foods, red meat and fried foods, but his excess weight indicates that he did not always follow his own advice. Having a big belly and small hips almost always means that a person has excess fat in his liver which can cause diabetes and, in turn, heart damage. A high rise in blood sugar after meals can damage every cell in your body. To prevent blood sugar levels from rising too high after meals, your pancreas releases insulin which lowers high blood sugar by driving sugar from your bloodstream into your liver. However, a liver full of fat does not accept the sugar and blood sugar levels remain high to cause plaques to form in arteries and damage the heart to cause heart attacks and heart failure.
• Inflammation. A person’s own immune system can attack and destroy a person’s arteries to cause plaques to form and block arteries.  Then a plaque can break off to cause a heart attack. Any disease that damages tissues and any infection can turn on a person’s immune system to cause inflammation.

Other Health Problems
• Prostate cancer diagnosed at age 67 in 1997: From age 30 onward, he had seen the same physician every year for his annual physical exam and each time had a PSA blood test that is used to screen for prostate cancer. At age 64, the PSA test started to rise and for the next three years he received prostate biopsies that all came back negative for cancer. On the fourth year, his biopsy did show prostate cancer and he had his prostate with its cancer removed surgically followed by radiation therapy for seven weeks. Eight weeks after finishing treatment, he was back on the Senior PGA Tour, continued to play for the next nine years, and retired in 2006. As far as I know, his prostate cancer never returned. More than 95 percent of prostate cancers will not kill, but a small number can progress rapidly to kill a man. The problem is that doctors do not have a definitive test to tell which prostate cancers are likely to spread rapidly, although they do have statistical signs such as how the cancer cells look under a microscope (Gleason Score), and whether they have spread. Today, most men over age 60 with prostate cancer should be treated with “watchful waiting” as the treatments cause a very high degree of pain, discomfort, impotence and incontinence.
• Irregular heartbeats and high blood pressure: In August, 2014, at age 85, Palmer had a pacemaker implanted to control irregular heartbeats that made him dizzy. For many years before that, he had been on medications to treat high blood pressure, a condition that increases a person’s chances of developing heart muscle damage and irregular heartbeats. He had also gained a lot of weight in his belly which convinced me that his liver was also full of fat, the major cause of high blood sugar levels, diabetes and heart damage. He was also showing signs of unsteadiness on his feet, another consequence of irregular heartbeats. Each complete blockage of blood flow to the heart muscle can result in scarring that replaces the damaged part of the heart muscle to eventually cause heart failure.
• Falls and bone fractures: In December, 2014, he dislocated his shoulder and fractured his collar bone when he tripped over his Labrador retriever, Mulligan. He was apparently debilitated by his heart disease by that time as he was having difficulty with walking and coordination.
• Tooth infection, a deep clot in his leg and intestinal bleeding: In 2015, he had a severe tooth infection that could have been a warning that his immunity was not working properly. That same year, he developed a deep clot in a leg vein. Clots in the veins in the legs can spread through the bloodstream to go to the brain to cause a stroke or to the lung to cause severe shortness of breath, so he was treated with an anti-clotting drug called Xarelto. At this time he was terribly unsteady on his feet and people had to help him walk.

Lessons from Arnold Palmer’s Heart Failure
A regular exercise program helps to prevent all sorts of diseases and prolong lives. However, even the world’s greatest athletes still have to follow the rules for healthful living. I recommend that you should try to exercise every day, never smoke or spend time with smokers, avoid or severely restrict alcohol, maintain a healthful weight, and follow a plant-based diet.

Gina Lollobrigida: In Seniors, a Broken Hip is Often Fatal

Barbara Walters: The Best and Brightest and Dementia

Franco Harris and the Immaculate Reception