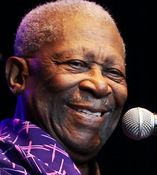 B.B. King was arguably the best-known blues singer and guitarist in the world. He recorded more than 50 albums, was inducted into the Rock and Roll Hall of Fame in 1987, won a lifetime achievement award from the National Academy of Recording Arts and Sciences in 1988, and received the Presidential Medal of Freedom in 1990 and a National Heritage Fellowship from the National Endowment for the Arts in 1991.

King died at age 89 on May 14, 2015, from a series of strokes and kidney and heart failure resulting from diabetes, brought on by a lifelong unhealthful, inflammatory lifestyle. He was a high-profile spokesperson in the fight against diabetes, but he didn’t follow the rules necessary to control what for him should have been a curable disease. He was a diagnosed diabetic for more than 25 years, and earlier pictures of him show a massive belly so it is likely that he had diabetes for at least 40 years. His genes probably would have allowed him to live many more years if he had avoided obesity, lack of exercise, a horrible diet, working long hours in nightclubs that disrupted his normal circadian rhythms, and other lifestyle factors that cause and worsen diabetes.

The Road from Poverty to Stardom
He was born in 1925 to sharecroppers on a cotton plantation near Itta Bena, a very small town in Mississippi. His mother left his father when he was four, so he was raised by his maternal grandmother. At age 12, he borrowed $15 from the plantation owner to buy his first guitar. As a teenager he picked nearly 500 pounds of cotton a day, earning 35 cents for every 100 pounds he picked. He went to the larger city of Indianola, Mississippi and played on the streets for handouts from passersby. At age 15, he dropped out of high school because he could make more money by playing his guitar at night. At age 18, he learned how to drive a tractor and suddenly had his pay raised as high as $22.50 a day. That same year, he enlisted in the Army, but was discharged at the request of his local draft board because he was more valuable as a tractor driver working on farms to grow food for the Army. At age 21, he moved to Memphis and got a job as a disc jockey on WDIA radio, the first radio station programmed for the black audience.

In 1951, at age 26, he was discovered by Sam Phillips of Sun Records, where Elvis Presley, Jerry Lee Lewis, Johnny Cash, Roy Orbison, Carl Perkins and others got their starts. On a riverboat/bicycling trip down the Mississippi River, we visited the original Sun Records studio, which is now a museum that has many of B.B. King’s early recordings.

A Hard Worker
When he taught himself to play the guitar, he found out that he lacked the coordination to sing and play at the same time, so he alternated singing and playing long cords. He was the first blues performer to do this. His fingers were too wide to use the bottlenecks and slides that other guitarists used, so he rocked the fingers of his left hand rapidly on the guitar frets in the same way that concert violinists make their strings shake for a vibrato sound. The effect was so wonderful that some of the very best musicians copied him, including Eric Clapton, Jimi Hendrix, John Mayer and the Red Hot Chili Peppers.

At age 27, King and his band started to wear fancy three-piece suits because, “Duke Ellington, Benny Goodman, Count Basie, Lionel Hampton and Glenn Miller don’t wear jeans.” Other black musicians criticized him for dressing like white people to cater to white audiences. However, he was clearly better and worked harder than almost everyone else, giving more than 300 performances year after year, and his hard work paid off. In 1956 he played in 342 concerts and shows. The fans loved him.

He married Martha Lee when he was 17 and Sue Hall when he was 32. Both marriages lasted only a few years, probably because of his incredible work schedule that kept him away from home almost every night. He claimed to have had 15 children with several different women, and 50 grandchildren.

Diabetes Takes its Toll
In 2013, he told Rolling Stone, “I’m slower. As you get older, your fingers sometimes swell. But I’ve missed 18 days in 65 years. Sometimes guys will just take off; I’ve never done that. If I’m booked to play, I go and play.” In October 2014, he cancelled eight tour dates because he was too sick to perform. Swollen fingers mean that he was retaining fluid and for a diabetic, that often means kidney or heart failure. He probably had both organs failing. He was hospitalized twice and on May 1, 2015, his website announced that he was in hospice care at his home in Las Vegas. He died there on May 14.

Malnutrition in Utero and Childhood Increases Diabetic Risk in Later Life
His early poverty placed him at high risk for diabetes. Several studies show that food deprivation increases risk for obesity, diabetes and heart attacks in later life when children are:
• deprived of food in early life,
• born to mothers who were deprived of food before and during pregnancy (Molecular and Cellular Endocrinology, 2001;185: 93–98).  B.B. King’s early promotional photos show a slim young man, even skinny, but by the 1970’s and 1980’s he was grossly overweight, His huge stomach tells me that he was already headed for diabetes and was probably diabetic for many years before he was diagnosed. Gaining a lot of weight after being skinny early in life markedly increases a person’s chances for becoming diabetic. When people who are skinny for most of their early years gain lots of weight, they usually switch to storing most of their fat in their bellies, rather than their hips and buttocks.  This is called organ fat, which is a common cause of diabetes.  Everyone’s blood sugar rises after eating, but if blood sugar rises too high, sugar sticks to cells and damages them. To prevent blood sugar from rising too high, your pancreas releases insulin which lowers blood sugar by driving sugar from the blood into the liver.  However, if the liver is full of fat, the liver does not accept the sugar and blood sugar levels rise to high levels that can damage every cell in your body.

How Diabetes Kills
King had Type II diabetes that almost always starts when your blood sugar rises too high after you eat. This causes sugar to stick to the outside surface of all the cell membranes everywhere in the body. Once stuck on a cell membrane, sugar can never get off. It is eventually converted by a series of chemical reactions to sorbitol which destroys the cell.  For most diabetics, the first sign is weight gain characterized by fat deposits underneath the skin in the belly. People who can pinch more than two inches in the skin over their belly should get a blood sugar level drawn two hours after eating a large meal. If it is over 140, consider yourself diabetic and expect terrible disabilities and a premature death if you don’t make immediate lifestyle changes. You are at increased risk for a heart attack. Some doctors tell their patients that a fasting blood sugar below 100 means that they are not diabetic, but this makes no sense because blood sugar levels go up and down all day long.

Diabetes doesn’t just kill you, it makes your life miserable for years or decades before your death. The first cells to be noticeably damaged are usually nerve cells, causing symptoms such as burning and loss of feeling in the feet or loss of vision. Men often start to lose their ability to sustain an erection. If you ignore these symptoms, expect the next signs to be those of blood vessel damage: chest pain and shortness of breath on mild exertion. These are signs of blocked arteries leading to your heart and often predict a heart attack in the near future.

Next you will become forgetful and find that you are losing your ability to remember telephone numbers, names and faces. If you don’t change your lifestyle, it’s all downhill from there and you can end up dying from a stroke, heart attack or heart and kidney failure.

Lifestyle Changes, not Drugs, Can Cure Diabetes
More than 40 percent of North Americans will become diabetic. Doctors use various drugs to control diabetes, but nobody has ever been cured of diabetes by taking drugs. A cure requires:
• Losing excess body fat
• Growing muscle
• Avoiding sugared drinks including fruit juices, all sugar-added foods and other refined carbohydrates (foods made from flour), fried foods, and red meat and processed meats (which block insulin receptors)
• Eating large amounts of fruits and vegetables
• Exercising every day (contracting muscles do not need insulin to lower high blood sugar levels)
• Getting blood levels of hydroxy vitamin D above 20 ng/ml