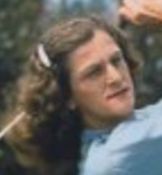 Babe Didrikson Zaharias was named the best female athlete of the 20th century by the Associated Press.  In the 1932 Olympics, she became the only track and field athlete, male or female, ever to win individual Olympic medals in running, throwing and jumping events. She set four world records:
• She won the 80-meter hurdles in a world-record 11.7 seconds, breaking her previous world-record that she had set in a preliminary heat.
• She won the javelin with a world-record throw of 43.69 meters.
• She should have won a third gold medal in the high jump, tying the world record in 5.5 feet with fellow American Jean Shiley, but was disqualified from gold because the judges incorrectly ruled that she had used an improper technique by going over the bar head first. This is what all high jumpers do in competition now.

She held several world records in track and field, was All-American in basketball, and was better than almost anyone else in tennis, softball, baseball, bowling, golf, track, swimming, diving, boxing, volleyball, handball, billiards, skating and cycling. She was the best female golfer in the world from the late 1940s to the early 1950s. A reporter once asked Babe if there was anything she didn’t play, she answered, “Yeah. Dolls.”

Early Life in Sports
Mildred Ella Didriksen was the sixth of seven children, born in 1911 in Port Arthur, Texas, to Norwegian immigrants Ole Didriksen and Hannah Marie Olsen Didriksen. Her mother was a skier and skater, and her father was a ship’s carpenter and cabinetmaker. Her family was very poor and she was not a good student in school. She grew to be only 5’6″ tall.

She played with boys instead of girls because she “hated hopscotch and jacks and dolls.” After she hit five home runs in one game with boys, her brothers nicknamed her “Babe” after the best baseball player in the world, Babe Ruth. She was the best player in the league on the Beaumont High School basketball team that never lost a game. She was also the top player on her high school volleyball, tennis, baseball, and swimming teams.

In 1930, at age 19, she dropped out of her junior year in high school to join the basketball team at Employers Casualty Company of Dallas. To keep her amateur status, she was paid only $75 a month “to be a secretary”. She also played on the company’s track and field, baseball, diving and tennis teams. The company’s basketball team won the U.S. national championship in 1930, 1931, and 1932. She often scored more than 30 points a game and was All-American for the Women’s National Basketball League for all three years. In softball, she had a batting average greater than .400.

Between 1930 and 1932, Didrikson held American, Olympic, or world records in five different track-and-field events. In 1930, she won the javelin and baseball throw at the National Women’s Amateur Athletic Union (AAU) meet, and finished second in the long jump. In 1931, at the national AAU track championships, she competed in eight events, winning gold medals in six events, setting world records in the javelin (139 feet, 3 inches), 80-meter hurdles (11.9 seconds), baseball throw (272 feet, 2 inches) and tying in the high jump (5 feet, 5 inches). At the 1932 AAU championships, she won the team championship, scoring all of her team’s 30 points.  Because she was a woman, she was allowed to enter only three events in the 1932 Olympics.

Supporting Herself after the Olympics
In 1933, after the Olympics, she played basketball, competed and gave exhibitions in billiards, and even gave boxing demonstrations at Art McGovern’s New York gym. However, to continue to compete as an amateur, she could not receive any money for playing sports. In January 1933, the 21 year old triple Olympic champion presented a vaudeville act at the Palace Theater in Chicago to a sell-out audience. She started her act by singing and then changed her high heel shoes for rubber-soled track shoes. She removed her dress coat to show a red, white, and blue Olympic jacket with U.S.A. on it and satin shorts and started to run on a treadmill. Another woman jumped on a second treadmill, and lost the race against Babe. She then knocked golf balls into the audience. Then someone tossed a harmonica to her and she played “Jackass Blues,” “When Irish Eyes Are Smiling,” and “Begin the Beguine.” The audience loved her. She received $1,000 for a week of shows, an incredible amount of money during the Great Depression. In New York, her pay rose to $1,200 a week. However, vaudeville was a miserable life and she preferred to return to sports where she really belonged.

Turning Professional
In 1935, Didrikson was declared a professional because she accepted money to endorse an automobile, so she had to figure out other ways to earn a living. She was the only woman on the Babe Didrikson All-American basketball team that traveled all over the country to play local teams. She was also the only member of the House of David baseball team who didn’t have a long beard. Once in an exhibition game, she struck out the best baseball player in the world, Joe DiMaggio. She also competed in billiards.

She started to play golf, and in her eleventh game, she drove the golf ball 260 yards from the first tee and played nine holes in 43 strokes. In 1934, she entered and won her first tournament, with 77 strokes for 18 holes. In 1935 she made more than $15,000 just from playing golf. In the 1946 and 1947 seasons, she won seventeen straight tournaments. She won a total of 82 golf tournaments.

George Zaharias and Betty Dodd
In 1938, she met George Zaharias, a professional wrestler, at the Los Angeles Open and married him on December 23, 1938. For the next 12 years, George was her manager while she played in professional golf tournaments.

In 1950, Babe and her husband bought and lived in the Tampa Golf and Country Club, but George was never there because he was always “traveling.” Babe met a young pro golfer named Betty Dodd who roomed with Babe on the LPGA (Ladies Professional Golf Association) circuit. In 1953, Babe played the harmonica and Betty Dodd played the guitar on the Ed Sullivan show.

Betty lived in Babe’s home for the last six years of Babe’s life. When Babe was in the hospital dying from colon cancer, Betty moved into her room, pushing the beds together. The Gay and Lesbian Biography says, “It was common knowledge that they were primary partners.” Dodd stated publicly that she had such admiration for this fabulous person that “I never wanted to be away from her even when she was dying of cancer. I loved her. I would’ve done anything for her.”

George had difficulty accepting the relationship between Babe and Betty and spent a lot of time away from them. He stopped wrestling to manage Babe’s career and promoted wrestlers, owned a cigar store, and managed a women’s sports store in Beverly Hills. When he met Babe, he weighed a very athletic 250 pounds, but during the marriage, he ballooned to more than 400 pounds and constantly smoked cigars.

Cancer Diagnosis
In April of 1953, Babe Zaharias was diagnosed with colon cancer. After surgery, Dodd cared for Babe all the time and told a reporter that Babe’s husband couldn’t afford to be jealous anymore because he wouldn’t do anything for Babe. In 1954 Babe won the U.S. Women’s Open wearing a colostomy bag. The cancer spread through her body and she died on September 27, 1956, at the age of 45. On that day, President Dwight Eisenhower used his press conference as a testimonial to this great lady.

What You Should Know About Colon Cancer
We don’t know what causes colon cancer, but we do know that more than 50 percent of cases are associated with lifestyle and environmental factors (Br J Cancer, 2011;105(S2):S77-S81). Being overweight or diabetic markedly increases risk for colon cancer. Diabetes increases colon cancer risk by more than 30 percent (Diabetes Care, 2015 Mar; 38(3):495-502).  See my report on Colon Cancer, a Preventable Disease?

Other Diseases That Increase Colon Cancer Risk
Having your gall bladder removed for any reason increases colon cancer risk. Bile is a carcinogen. Normally your gall bladder collects all the bile made by your liver and releases it into your intestines and mixes it with food only when you eat. However when your gall bladder is removed, bile drips 24 hours a day into your intestines to coat your colon all the time to increase cancer risk.  Human papilloma wart virus (HPV) and the human immunodeficiency virus (HIV) are both associated with increased risk for colon cancer. Helicobacter pylori, bacteria that cause stomach ulcers and stomach cancer, also increases risk for colon cancer.

The same lifestyle factors that increase risk for colon cancer also increase risk for several other types of cancers, heart attacks, strokes, obesity, diabetes and dementia, so making the lifestyle changes recommended to reduce colon cancer risk will also help to protect you from most of the major diseases that are associated with aging.
• Follow a plant-based diet with plenty of vegetables, fruits, nuts, whole grains, beans and other seeds
• Avoid or restrict mammal meat, processed meats, sugar-added foods, sugared drinks and fried foods
• Try to exercise every day
• Maintain a healthful weight
• Avoid smoking, alcohol, unnecessary drugs and other toxic substances

Gina Lollobrigida: In Seniors, a Broken Hip is Often Fatal

Barbara Walters: The Best and Brightest and Dementia

Franco Harris and the Immaculate Reception