It wasn't the Russians who defeated Napoleon in the War of 1812; it was Napoleon's surgeon general, Baron Larrey.  Napoleon was set to conquer the civilized world, but he was done in by Russia's horribly cold winter. Baron Larrey made matters worse by telling the soldiers to rub snow on their frozen hands. Rubbing snow on frostbite removed their skin, which led to infection and death.
Napoleon’s men had marched thousands of miles to capture Moscow, and indeed they did, but the Russians had burned Moscow to the ground before the French army got there. They could not stay in burnt-out Moscow because they had no food, heat or shelter, so they had to march back to France during the dreaded Russian winter. The French soldiers had great incentive to get back to France, since Napoleon ordered that any stragglers should be shot on the spot.
The soldiers would march all day in the freezing cold and warm themselves by a fire each night. Baron Larrey noticed that the soldiers who were closest to the fire were the ones who were most likely to die from the cold.  Those closest to the fire had their hands rewarm and thaw, while those far away from the fire had hands that continued to be frozen. The next day, those who had their hands thawed would go out and freeze their hands again. During warming, frost-bitten cells burst and are destroyed (Emerg Med Clin N Am, 2004;22:281–298). Since most of the damage from frostbite occurs during thawing, an extremity should not be warmed if it is likely to freeze again. Larrey’s lack of knowledge about the treatment of frostbite contributed to reducing Napoleon’s Grand Armee from 453,000 to fewer than 10,000 fighting men by the time they got back to France.
Baron Larrey's Education and Career
Dominique Jean Larrey was born in the village of Beaudéan in the Pyrenees and lost both parents when he was only 13. He went to live with his uncle Alexis, chief surgeon in Toulouse, and spent six years as his apprentice.  He then went to Paris to study under the chief surgeon at the Hôtel-Dieu de Paris. In 1792, at age 26, he joined the French army.  In 1799, Napoleon made him a baron and appointed him chief surgeon of the Emperor's Imperial Guard. He served Napoleon in 25 major campaigns including 60 large battles during the revolutionary and Napoleonic wars from Austerlitz (1805) to Moscow (1812), and at the Battle of Waterloo (June 18, 1815).  He was with Napoleon at his escape from Elba.
Larrey’s Many Contributions
In 1808, the retreating Spaniards mined the roads with bombs that exploded to cause a tremendous number of lower extremity injuries. This gave Larrey the chance to perfect his technique of leg amputation. In 1803, he performed the first amputation of a hip joint. He treated open wounds with dressings dipped in wine and camphor instead of dry cotton. In 1812, during the retreat from Moscow, he learned that frozen legs feel no pain during surgery, so he packed wounds with snow and ice. He recommended removing bullets when most doctors left them in place and stuck their dirty fingers into the track created by the passing bullet. This often caused an infection that would spread through the patient’s body to kill him. This is how U.S President Garfield died.
In spite of the harmful results of his frostbite treatment in the War of 1812, Larrey made many contributions to the care of wounded soldiers on the battlefield. He:
• developed one of the first ambulance services in which horse-drawn wagons carried wounded soldiers from the battlefield to base hospitals
• was among the first to use positive pressure breathing to treat people with chest wounds
• was one of the first of his time to drain pus from wounds
• used snow and ice to anaesthetize injured limbs before amputation
• used snow and ice to preserve injured limbs
• coined the term "triage" to decide which soldiers needed immediate treatment and those whose treatment could be done later or was hopeless
• initiated, organized and built military hospitals in Egypt, Sudan, Syria, and Palestine
• was a humanitarian who instructed his doctors to treat soldiers of enemy armies with dignity and compassion.
• published articles about typhus, bubonic plague, leprosy, and trachoma
World-Wide Respect
At the Battle of Waterloo, Larrey went out to the battlefield to help treat wounded French soldiers. The Duke of Wellington was so impressed that he ordered his soldiers not to fire in his direction to "give the brave man time to gather up the wounded."
After Waterloo, the Baron was captured, imprisoned and sentenced to death by the Prussians. However, a German physician who was his former student recognized him and begged the judge, Marshal Bluicher, not to sentence him to death.  By a great coincidence,  Bluicher's son had been wounded and taken prisoner by the French and Dr. Larrey had saved his son's life. Larrey was pardoned, invited to have dinner with the Bluicher family and allowed to return to France.
He spent the rest of his life practicing medicine and writing his memoirs. When Napoleon was exiled on the island of St. Helena, he said, "Larrey was the most honest man and the best friend to the soldier that I ever knew. He is the worthiest man I ever met." 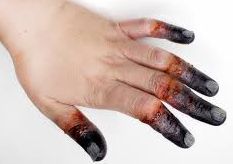 How You Can Avoid Frostbite
You should never suffer from frostbite because you get plenty of warning. Frostbite means that your skin is frozen. Your normal skin temperature is about 90 degrees. As your skin temperature starts to drop, blood vessels close and your skin turns white. When the skin temperature reaches 59 degrees, your body attempts to rewarm it by opening the blood vessels, causing your skin to tingle, itch, burn and turn red. This is called the Hunting Response. When this happens, get out of the cold. If you don't, the blood vessels in your skin will close down again and your skin temperature can drop rapidly.  When it drops below 30 degrees the water in your cells starts to freeze. If you think you have frostbite, seek medical help immediately.  This is a very serious problem that can cause you to lose fingers, toes and more.  If you are far from medical assistance and have warm water available,  re-warm the skin in slowly warm water (100 to 108 degrees Fahrenheit).
Baron Dominique Jean Larrey
July 8, 1766 – July 25, 1842

Johnny Cash, the Man in Black