Italian cyclist Michele Scarponi was killed by a truck on April 22, 2017.  At age 37, he was at the peak of his career as a professional bicycle racer.  He won the opening stage of the Tour of the Alps in Trento, Italy, eventually finished fourth in that tour, returned home that night, and went on a training ride the very next morning.
A 57-year-old builder driving a commercial van made a left turn into a Y-intersection, pulling directly in front of Scarponi to cause a brutal impact.  Scarponi was struck with the front right bumper and smashed into the windshield and he was killed instantly.  An emergency crew failed to revive him and he was evacuated by helicopter.  Scarponi had the right-of-way on the slightly downhill road but the driver, who knew Scarponi’s father, said that he failed to see the bicycle.
Scarponi was scheduled to lead his team, Astana, two weeks later at the  2017 Giro d’Italia. He left behind a wife and twin four-year old sons, Giacomo and Tommaso.  On the day after Scarponi’s death, a tearful Alejandro Valverde dedicated his Liège-Bastogne-Liège victory and 20,000-euro prize money to Scarponi’s widow.  Scarponi was beloved as the team comedian who often started training rides with his parrot on his shoulder.
Cycling Is a Very Dangerous Sport
In almost 100 percent of car-bike collisions, the car driver is not hurt because the average car weighs around 4,000 pounds and the average carbon-fiber bike weighs less than 20 pounds, so the bike rider always loses. In the last 17 years, more professional cyclists were killed than athletes in any professional sport other than soccer.   The number of sporting deaths of professional athletes from 2000 to 2017 was:
• Cycling 46
• Soccer 85
• Boxing 34
• Rugby 14
• Wrestling 14
• American football 14
• Ice hockey 6
There are far more professional soccer players than professional cyclists, so the death rate for cyclists is the highest of any professional sport.
Rules for Safe Cycling
1.  Follow the laws.  Bicycles are vehicles that must obey all traffic control devices and road markings.
2.  Ride on the right.  Use the farthest right lane that is heading in your direction.
3.  Be predictable.  Signal and check for traffic when turning or changing lanes.
4.  Be visible.  Use front and rear blinking lights, day and night, reflectors and bright colored clothing.
5. Always wear a properly fitted helmet, no matter how short the trip.
6. Match the roads you use to your skill level.  Slow and inexperienced riders should avoid busy or high-speed roads.
7.  Ride defensively.  Make sure other vehicles can see you before you enter an intersection or change lanes.   If in doubt, stop and wait.  The bicyclist always loses in an accident, even if he or she was right. 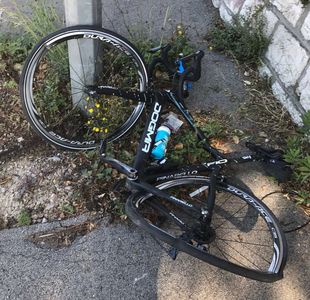 Also be aware that angry drivers may intentionally try to run you off the road or even hit you.  This week Chris Froome,  one of the most famous bicycle racers in the world and three-time Tour de France winner, was hit by a car driven by a person “who did it on purpose.”  Fortunately, Froome was not injured. Another Tour de France racer, Yoann Ofredo, was recently assaulted by a driver while training outside of Paris. Ofredo said the driver appeared to intentionally try to cause Ofredo and his two training partners to crash.
Michele Scarponi
September 25, 1979 – April 22, 2017
Checked 3/21/22