From Changi Prison to the Death Railway
For his first few months as a Japanese POW, Donald Purdie worked with other prisoners to make conditions in Changi as humane as possible, despite the extreme overcrowding and lack of food. They were even allowed to bring books from Raffles College so they could organize classes and a library for prisoners. That all ended when Donald was transported north to a slave labor camp to build the Death Railway, a 258-mile Japanese rail line to connect Siam (Thailand) to Burma.   After eight months of forced labor in impossible jungle conditions, with virtually no food, sanitation or medical care, Donald died on May 17, 1943. He was one of 13,000 Allied POWs and 90,000 Asians who died in these work camps.  Many of the surviving POWs have said  that the popular films about the Death Railway, The Bridge on the River Kwai and The Railway Man, failed to capture the horrible reality of their experiences.  After the war, 111 Japanese and Korean soldiers were tried for war crimes for their brutal treatment of the Death Railway prisoners, and 32 were sentenced to death.
The Survivors
At the end of her long journey, Carol arrived in the United States with her two children and went back to Glen Rock to live with her parents while she waited for news of Donald.  She eventually learned that he had been killed by the Japanese in 1943, but his death was not confirmed until 1945.  She spent the rest of her life just trying to cope.  She remarried twice:  the first time with the practical goal of providing a stable home for her two children and the second time with the fantasy goal of building a sailboat and sailing around the world. She succeeded with both goals, although the trip around the world went only to Hawaii, where she and her third husband lived aboard their ketch Crescendo in Lahaina Harbor until her death. At age 57, she suffered a ruptured berry aneurysm in her brain and never regained consciousness. She died on January 23, 1976, just a few days short of the 34th anniversary of her evacuation from Singapore. She had never fully recovered from losing the love of her life and had been devastated by this terrible example of man's inhumanity to man.
Berry Aneurysm
A berry aneurysm or cerebral aneurysm is a weakened area in the wall of a blood vessel that balloons out and can rupture to bleed into the brain.  You can have no symptoms at all, or it may leak blood to cause a severe headache. The ballooned artery can press on nerves or other parts of the brain to cause double vision or loss of vision, headaches, and eye or neck pain.  All sudden, severe headaches should be checked immediately to rule out a ruptured berry aneurysm. Risk factors include high blood pressure,  atherosclerosis, persistent headaches, long-term use of pain medications or a family history of stroke.
Diana's note:
Much of this story is drawn from my mother's unpublished book which she wrote between 1946 and 1949.  I have also gotten a lot of information from Mary Harris, daughter of Norman and Elizabeth Alexander, who were Donald and Carol's neighbors and close friends at Raffles College.
This year I have learned the parallel story of Malcolm Read, who posted a note in the Malayan Volunteers Group about a commemorative medal (below)  issued by the Malaya Section of the Royal Institute of Chemistry.  Our fathers were both chemists – Malcolm's working for the government searching for ways to make white rice more nutritious, and mine as head of the university's chemistry department.  The medal honored them along with three other members of the society who had died in captivity.
Malcolm was one year old and I was three weeks old when our mothers carried us aboard evacuation ships to escape from the attacking Japanese. Our fathers stayed behind, having left their civilian jobs to serve as "volunteers" for the defense of "Fortress Singapore."  They were captured by the Japanese on February 15, 1942 and both died performing slave labor in brutal jungle conditions and on starvation rations.   Malcolm wrote a detailed account of his family's  experiences in his book Don't Know How, Don't Know When (available on Amazon).
Our email correspondence revealed that Malcolm, like Gabe, was a sports medicine doctor and that we had many other common interests, so we decided that it would be fun to meet.  Fortunately, Malcolm and his wife Rosemary were willing to do the traveling and we were able to offer Florida's appealing winter climate.  So, this month, we are getting together to mark these 75th anniversaries:
• January 26 – Diana's birthday
• January 30 – Malcolm's evacuation from Singapore with his mother, aboard the Duchess of Bedford
• February 8 – Evacuation of Diana with her mother and brother Rob, aboard the Felix Roussel
• February 15 – The Fall of Singapore and the last day of freedom for our fathers, Frederick Read and Donald Purdie
Carol Brown Purdie
December 23, 1918 – January 23, 1976 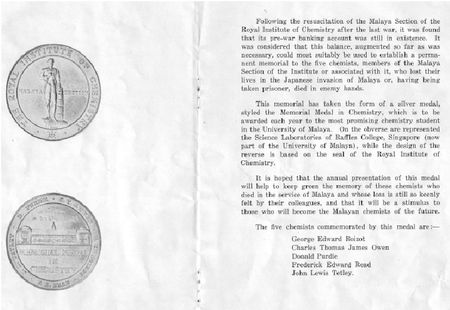