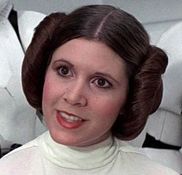 Carrie Fisher, best known as Princess Leia in Star Wars, was a brilliant writer and producer as well as a productive actress.  She appeared in Shampoo, The Blues Brothers, Hannah and Her Sisters,  When Harry Met Sally and other movies, and wrote several best-selling books.  At the very young age of 60, she died of a heart attack brought on by her inflammatory lifestyle that included:
• Uncountable lovers who exposed her to infections that can damage the heart directly
• Narcotic drugs that can damage the heart muscle directly
• Excess alcohol that damages the heart muscle directly
• Yo-yo dieting that had her bounce between drop-dead slim and obesity exceeding 180 pounds.  Repeatedly gaining and losing weight can deposit plaques to plug up the arteries leading to the heart.
• Bipolar disorder with manic periods where she was incredibly productive in writing and acting, followed by depression in which she could not function and took in heart-damaging excesses of food, alcohol and drugs.  She stated on ABC's 20/20 that she used cocaine to help control her mood swings. She also had received electric shock treatments
A Traumatic Childhood
She was the daughter of world-famous singer Eddie Fisher and world-famous actress Debbie Reynolds.  When Carrie was just two years old, her father left her mother to marry one of her mother's best friends, Elizabeth Taylor, who was the widow of one of her father's best friends, Mike Todd.  Her mother responded by marrying the owner of a shoe-store chain, Harry Karl, who lived off of and mismanaged Debbie Reynold's money.
Carrie was always a very good student and responded to her parents' behavior by reading books, writing poetry and keeping journals.  At age 15,  she appeared in her mother's Broadway play, Irene,  and never returned to high school. She was so smart that she was accepted at Sarah Lawrence College, even though she did not have a high school diploma.  She was never graduated from college because she was too busy making movies.

A Brilliant Writer
At age 31, she wrote a best-selling first novel, Postcards from the Edge, about her own drug addiction and crazy life among the rich and famous.  That was followed by other novels such as Surrender the Pink and Delusions of Grandma.  She wrote and produced scripts for several movies, and wrote and performed a successful play.  Several movie and TV producers hired her to edit scripts and write documentaries.
Popular with Men
When she starred in Star Wars with Harrison Ford, who was married at the time, they had a torrid three-month affair.  That same year she started a five-year affair with musician Paul Simon.   At age 24,  she was briefly engaged to actor Dan Aykroyd, but instead married Simon.  They divorced eleven months later.   Next was talent agent Bryan Lourd. They had a child, but he left her for a relationship with a man.  After that, she had a relationship with James Blunt and they worked together on his recordings. When she was 49, Greg Stevens, a lobbyist, died in her bed of a heart attack with high blood levels of cocaine and oxycodone.

Death at Age Sixty
On December 23, 2016, she was on a commercial flight from London to Los Angeles when her heart stopped beating and she stopped breathing.   A passenger immediately started pounding on her chest to circulate blood to her brain and she was taken off the plane by ambulance to Ronald Reagan UCLA Medical Center where she had to be placed on artificial respiration.  She died four days later at age 60. Her mother, Debbie Reynolds, died the following day from a stroke.
Inflammation and Heart Attacks
You better believe that your lifestyle is the main factor that determines whether you will live a long, healthful life or die young from a heart attack.  Your immunity is supposed to be good for you. When you get an infection, your immunity produces cells and chemicals that attack and kill germs.  However, if your immunity stays active all the time, you develop inflammation: the same cells and chemicals that are supposed to tear apart the membranes of attacking bacteria, instead punch holes in the inner linings of your arteries.  These holes bleed and clot and then plaques start to form and the plaques grow larger with time.  Then suddenly a piece of plaque breaks off from the inner walls of the lining of the arteries leading to your heart.  You bleed and then form clots that completely block the flow of blood to the heart muscle.  The heart can live only for up to 1.5 hours without oxygen from the bloodstream. After that, it dies. You have only 1.5 hours after a heart attack starts to have a doctor open up the artery. Otherwise, the heart muscle dies and you can develop an irregular heartbeat that stops your heart from pumping blood to your brain and you can die.
Exactly the same cells and proteins that are called out to fight infections are also called out to repair damaged tissues.  Inflammation that can lead to plaques and heart attacks can be caused by everything that turns on and keeps on stimulating your immunity:
• a pro-inflammatory diet that is high in red meat, fried foods, sugared drinks and sugar-added foods, and low in vegetables and fruits
• not exercising
• being overweight
• vitamin D deficiency (hydroxy vitamin D levels below 20 ng/dl)
• regular use of alcohol at any dose
• smoking
• narcotics and other recreational drugs
• chronically damaged tissue such as diseases that cause chronic muscle and joint damage
• chronic infections
Carrie Frances Fisher
October 21, 1956 – December 27, 2016