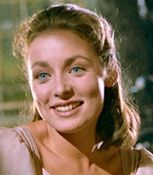 Just about everyone has heard her sing "I am Sixteen, Going on Seventeen" as Liesl, the eldest daughter of Captain Georg von Trapp in the film The Sound of Music. The song is about the first love of a 16 year old girl.  In real life, she was a college student who had never been in any movie and her first audition for anything got her accepted for the part of Liesl largely because she was 21 and looked like she was 16.  She was selected over seasoned actresses including Patty Duke, Mia Farrow and Lesley Ann Warren.
Her other best-known song in the movie was when she led her siblings in "So Long, Farewell", in which she works up the nerve to ask her father for her first sip of champagne. In the movie, Christopher Plummer, who played her on-screen father, denies her request for alcohol. Actually, during the nine months it took to make the movie, Christopher Plummer, who was 13 years older than Carr, took her to many different bars in Austria.  Oprah Winfrey asked her on her show, "Did you learn anything from Plummer?"   She replied, "Yes, I learned how to drink."

Her Life Story
Charmian Anne Farnon was born in Chicago in 1942, to a vaudeville actress and an orchestra leader. When she was 10, her family moved to Los Angeles.  When she was 13, her father deserted the family and her mother started to drink heavily.  When she was 15, her parents divorced.  At age 21, she was majoring in speech therapy and philosophy at San Fernando Valley State College when, unknown to her, her mother arranged an audition for a role in The Sound of Music.  Carr said that she had never had a singing lesson and had never tried to act.  While she was working in a doctor's office testing urine samples, the film's producers called to tell her that she was chosen for the part of Liesl, so off she went to Austria for filming.  The director told her that her last name was too long, so she changed her name to Charmian Carr. After the filming was finished, Fox renewed her contract for seven years, but never asked her to do another film. Her first role was the highlight of her career.
The Sound of Music
It's the story of a novice nun, Maria, played by Julie Andrews, who answers the call from a retired Austrian naval officer, Captain Von Trapp, to help with his seven undisciplined children.  The film was made in 1965 with a budget of $8 million and ended up grossing more than $250 million, winning five Oscars and becoming one of the most successful film musicals of all time.
After The Sound of Music
In her only other major Hollywood picture role, she co-starred with Anthony Perkins in Evening Primrose, a 1966 television musical in which she played a mysterious young woman who lived in a department store.   In 1967, she married a dentist, Jay Brent, quit acting, had two daughters, and became an interior decorator. In the 1980s, she decorated the Encino home of Michael Jackson "with animals and mocked-up candy stores, but I quit because he was so weird."

Years later, Carr wrote about her experiences working on The Sound of Music in two books, Forever Liesl and Letters to Liesl.  The actors who played the seven Von Trapp children continued to communicate with each other right up to Carr's death.  The other siblings were Nicholas Hammond, Heather Menzies, Duane Chase, Angela Cartwright, Debbie Turner and Kym Karath.   In 2010, the cast members celebrated the 45th anniversary of The Sound of Music on The Oprah Winfrey Show.  In 2014, Carr recorded "Edelweiss" with the great-grandchildren of the von Trapps on the album Dream a Little Dream.
Symptoms of  Dementia
Her obituary states that she died at age 73 on September 17, 2016, from a rare form of dementia.  The specific type was not stated, but the odds are that it was Lewy body dementia.  Deposits of protein called Lewy bodies accumulate in the brain regions involved in thinking, memory and movement to prevent nerves from responding to dopamine that sends messages from one nerve to another.   It often shares many symptoms with another disease called Parkinson's disease. Symptoms include hallucinations, decreased alertness, inability to focus on one subject, rigid muscles, slow movement, tremors and loss of memory.  Other symptoms include falls, fainting, changes in speaking, forgetting words, poor problem solving, difficulty with learning new skills, impaired decision making, walking stiffly, falling, stiff arms or legs, a blank stare, stooped posture, drooling and a runny nose.  However, these symptoms can also have other causes such as alcoholism, overuse of medication, thyroid disease, high blood sugar levels or strokes.  A diagnosis of Lewy body dementia is made from suggestive tests, but a definitive diagnosis can only be made after death with an examination of the brain.

It Can Happen to Anyone
Even a person who was brilliant early in life can develop dementia in later life.  By age 85, from 25 to 50 percent of North Americans suffer signs of dementia (Archives of Neurology. 2003;60(8):1119-1122).  You can lessen your chances of suffering from dementia by:
• training your brain with special exercises or any activity that challenges you to think and concentrate
• exercising your muscles regularly
• avoiding smoking, smokers, and recreational drugs
• restricting or avoiding alcohol
• following a healthful high-plant diet
• preventing and treating everything that damages arteries, which also can damage your brain: heart disease, strokes, diabetes and high blood pressure.
See Preventing Dementia
Charmian Carr
December 27, 1942 – September 17, 2016