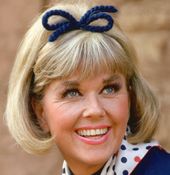 Doris Day was the top box-office movie star earner in the United States four times and won a Grammy Lifetime Achievement Award, a Legend Award from the Society of Singers, and the 1989 Cecil B. DeMille lifetime achievement award. She received the 2004 Presidential Medal of Freedom from President George W. Bush, won the 2011 Los Angeles Film Critics Association’s Career Achievement Award, and was nominated nine times for the Laurel Award and six times for the Golden Globe award for best actress. She recorded more than 650 songs from 1947 to 1967, and made 39 feature films with co-stars such as James Stewart, Rock Hudson, James Garner, Clark Gable, Cary Grant, James Cagney, David Niven, Jack Lemmon, Frank Sinatra, Richard Widmark, Kirk Douglas and Rod Taylor.

At age 97, she died suddenly of pneumonia, a lung infection characterized by cough, fever, and shortness of breath. Most people recover from the disease, but pneumonia hospitalizes more than one million North Americans and kills about 50,000 each year.

Early Life and Career
Doris Mary Kappelhoff was born in 1922 in Cincinnati, Ohio, to a music teacher father and a homemaker mother. Her parents divorced when she was young and her mother raised her and supported her children by working in a bakery. Doris wanted to be a dancer, but injured her leg in a car accident when she was 15. While she was recovering from her injury, she spent hours singing along with the big bands and singers on the radio. Her mother was so impressed with her talent that she arranged for Doris to take singing lessons. She was so good that after eight months of lessons, she was hired to sing on WLW radio.

An orchestra leader, Barney Rapp, heard her singing on the radio and hired her to sing with his band, which led to jobs with many other bands. Rapp suggested that she choose a name shorter than Kappelhoff, and they came up with “Day” from one of her favorite songs, “Day After Day.” At age 23, in 1945, she recorded “Sentimental Journey” with the Les Brown band, followed by “Embraceable You” in 1946. That led to her first movie, Romance on the High Seas. She had a thriving career in film from 1948-1968, but became typecast as the “world’s oldest virgin” and lost her status as a top box-office star. She turned down the role of Mrs. Robinson in The Graduate (1967) and said in her memoirs that she found the script “vulgar and offensive.”

Personal Life
She was married four times:
• At age 19 she married trombonist Al Jorden who beat her up when she refused to get an abortion and later killed himself. Their son, Terry, was a famous musician and record producer who died of a melanoma in 2004.
• At age 24 she married saxophonist George William Weidler and they divorced four years later.
• At age 29, she married film producer Martin Melcher, who adopted her son Terry and produced many of her movies. The marriage lasted 17 years, until he died in 1968. She then learned that he and his business partner, attorney Jerome Bernard Rosenthal, had lost millions of dollars of her money and left her deep in debt. She sued Rosenthal and finally reached a settlement in 1979.
• At age 54, she married Barry Comden and they stayed married until she was 60. He was the manager of her favorite restaurant who gave her dog scraps to take home to her pets.

Later Career and Charitable Work
After the death of her third husband, Marty Melcher, in 1968, she found that he had committed her to a television series that became The Doris Day Show, and several TV specials. She hated performing on television but needed the money and stayed with the show for a five-year run. She appeared occasionally in later shows, but basically retired from show business after she began to receive payments from the settlement of her lawsuit against Jerome Rosenthal. She turned her energy to her lifelong interest in animal welfare, set up the Doris Day Animal Foundation and the Doris Day Animal League (a lobbying organization), and adopted many animals that she cared for in her home. When she died of pneumonia at age 97, Day was in apparently good health. She had stopped rescuing stray animals, but her home was still full of her pet dogs and cats.

Pneumonia in Older People
The people most likely to die from pneumonia are those who are over 70, under five, or suffering from any condition that impairs the immune system’s ability to kill germs. People die from pneumonia when the germ spreads through their lungs to fill the air sacs with fluid, which causes them to smother to death.

Older age, by itself, is a major risk factor for dying of pneumonia (Int J Clin Exp Med, 2015; 8(8): 12463–12475). With aging, a person’s immune system progressively loses its ability to recognize and kill invading germs. Pneumonia is the second leading cause for hospitalization of people over 65 (Crit Care Med, 2005;33:2184–2193), and up to 20 percent of older people with severe pneumonia die (Clin Infect Dis, 2007;44(Suppl 2):S27–S72). Of those who die from pneumonia, more than 12 percent die within 30 days of admission to the hospital, with 52 percent dying during hospitalization and 47 percent dying after discharge (Chest, 2012; 142:476-481). Older people are also more likely to suffer from other medical conditions that increase risk for pneumonia: chronic heart failure, chronic lung disease, coronary artery disease, chronic liver disease, blocked arteries leading to the brain, cancers (excluding skin cancer), and diabetes. Death from pneumonia appears to be caused by smothering in mucus or by blood infections causing shock, respiratory failure, multi-system organ failure or heart failure (Chest, 2018;15 (3):628-35). A common cause of death from pneumonia is the flu, so most people should get a flu shot every fall.

Elderly people often fail to notice that they have pneumonia, so all family, friends and care givers should be aware of risk factors and signs of pneumonia:

Signs of Pneumonia
• coughing or difficulty swallowing
• fever and sweating
• shaking chills
• spitting green, yellow, or bloody phlegm
• shortness of breath, shallow or rapid breathing
• chest pain when breathing or coughing
• nausea, vomiting, or diarrhea with a cough or shortness of breath
• confusion, loss of appetite or excessive fatigue, particularly with a cough
• blue lips or fingernails
• inability to do usual tasks after developing a severe cough

Risk Factors for Pneumonia
• recent flu or persistent cough
• decreased ability to kill germs
• chronic diseases, particularly of the heart or lungs
• history of smoking or exposure to second-hand smoke
• history of excessive use of alcohol or drugs
• history of exposure to toxic chemicals or pollutants
• lack of a strong cough, such as after a stroke
• generalized muscle weakness, which increases risk for choking and inability to clear mucus or food from the throat
• exposure to harmful germs in a hospital, nursing home, or any environment where people at high risk for infections are housed together
• a weakened immune system, often caused by steroids, chemotherapy and many other drugs used to treat diseases
• suffering from any chronic disease such as diabetes, Parkinson’s disease, Alzheimer’s disease, heart disease or lung disease
• after surgery or being under anesthesia

Pneumonia is treated with antibiotics for pneumonia caused by bacteria, anti-viral medications for some viral infections, and a host of medications and machines to clear mucus and keep the airways open.