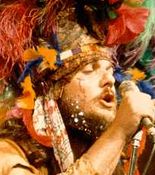 For more than 60 years, Dr. John sang, played and wrote songs in the blues, pop, jazz, boogie-woogie, and rock and roll.  He dressed in Mardi Gras costumes and his performances were often staged as voodoo ceremonies or folk medicine shows.  He recorded 39 albums, won six Grammy Awards and was inducted into the Rock and Roll Hall of Fame.  In spite of being kicked out of high school and not having a high school diploma, he was awarded an honorary doctorate of fine arts from Tulane University.  He died of a heart attack on June 6, 2019, at age 78.

Born to be a Musician
Malcolm John Rebbenack, Jr., was born in New Orleans just before the start of World War II to a father who owned a New Orleans store that fixed radios and televisions and sold records. His entire family had musical talent and everyone was able to play the piano, but Rebbenack did not take formal music lessons until his teens.  He sang for a short time in a choir until the conductor got rid of him.  His father encouraged him to sit in on recording sessions and he started playing guitar in New Orleans clubs.  He received his first paycheck for playing music at age 13, was signed by Aladdin Records at age 15, helped to record other musicians, and formed his own band at age 16.  He failed many of his high school courses so his teachers suggested that he stop playing in the band. He refused and was kicked out of school at age 14. In his teens, he played with several name bands and co-wrote a hit rock and roll song, Lights Out.
At age 19, he was shot in the ring finger of his left hand when he grabbed an assassin’s loaded gun aimed at his lead singer’s head during a confrontation at a night club. This injury prevented him from fingering the strings on his guitar, so he switched first to bass guitar and then to the piano.  During that period he sold narcotics and ran a brothel. He was caught and served two years in the Federal Correctional Institution in Fort Worth.  When he got out, New Orleans was being cleaned up and many of the clubs had closed, so work for musicians was scarce.  He moved to Los Angeles, where his musical talent made him instantly popular as a session musician and he backed up the already-famous Sonny & Cher, Frank Zappa and many others.
A New Persona
At age 27, he decided that he could attract his own audiences by dressing in strange clothes and playing voodoo-style music.  In New Orleans he had learned of an 1800s legendary person, “Dr. John,” who claimed to be a Senegalese prince who had moved to New Orleans from Haiti and could cure people of their illnesses. This “medicine man” supposedly had 15 wives and more than 50 children, kept snakes, lizards and embalmed animals, and made “gris-gris”, special amulets to ward off diseases and evil spirits.  Rebbeneck adopted “Dr John” as his stage name and dressed as a voodoo medicine practitioner with large snake skins, Mardi Gras feathers, bones and other ornaments. He would start his shows in a puff of smoke and even brought a boa constrictor and an anaconda on stage.  He called his first album “Gris-Gris.”  He became a world-famous musician who sold millions of records and performed to sold out audiences for more than 50 years.
His Unhealthful Lifestyle
Rebbenack’s early involvement with drugs led to heroin addiction, but he reported that he had finished rehabilitation at age 48 and stayed clean after that.  However, his lifestyle as a musician was basically unhealthful:
• working nights for an entire lifetime and not sleeping much during the day
• feeling the constant stress of being a performing musician
• using cigarettes and alcohol
• not participating in any type of exercise program
• being obese and carrying most of his excess weight in his belly
Fat stored in the belly is a sign that a person has fat stored in the liver, which is a common cause of diabetes. More than 68 percent of people age 65 or older with diabetes die from heart disease and another 16 percent die of strokes.  Diabetes is one of the major controllable risk factors for heart attacks.
His unhealthful habits eventually caught up with him and his last few years were spent with a heart so weak that he could barely walk even with assistance and he rarely left his house.  His family announced that he died from a heart attack, but it is more likely that his death was caused by heart failure in which his heart became so weak that it could not pump adequate amounts of blood to his body.  Repeated heart attacks replace contracting heart muscle with scar tissue that cannot contract, and every day that a person does not move around weakens the heart further until it becomes too weak to pump enough oxygen to the brain and a person dies of heart failure.  Obituaries often list this as  “natural causes.”
Lessons from Dr. John’s Lifestyle
Heart attacks cause more than 40 percent of the deaths in North America today and come primarily from unhealthful lifestyle habits, not from bad genes. You can tell that you are at increased risk for a heart attack if you:
• are overweight, particularly if you have a big belly
• are diabetic or pre-diabetic (blood sugar over 140 one hour after eating a meal)
• have a systolic blood pressure over 120 at bedtime
• have LDL cholesterol over 100
• have triglycerides over 150
Habits that increase heart attack risk include:
• eating sugar-added foods, mammal meat, processed meats and fried foods
• drinking any type of sugared drinks including fruit juices
• smoking, drinking alcohol, using recreational drugs
• not eating lots of vegetables, unground whole grains, beans, nuts and other seeds
• not exercising
You can help to prevent heart attacks, strokes and heart failure by changing these risk factors.
Malcolm John Rebennack Jr. (Dr. John)
Nov 20, 1941 – June 6, 2019