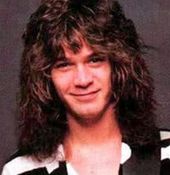 Eddie Van Halen is considered to be one of the most accomplished guitarists of all time, and he led his hard rock band to international fame. He also developed new techniques and changes in his guitar that many other guitarists have copied, such as finger tapping with both hands on the guitar neck.
• He couldn’t afford a distortion pedal, so he had to bang his guitar with his hands.
• He couldn’t afford a router, so he started hammering away with a screwdriver.
• He thought that manufactured guitar necks were too round on the back, so he used sandpaper to reshape the neck of his guitar.
• He noted that sweating on a lacquer-covered guitar made his fingers slippery, so he built wooden guitars with no lacquer.
• He corrected the strings from loosening and changing tone while he played by modifying “whammy bars,” pegs that locked down and would not turn to loosen the strings.

Difficult Early Years
Van Halen was born into extreme poverty. His father, Jan, was a traveling salesman in Dutch-ruled Indonesia where he met and married Eugenia, who was Eurasian. They moved to the Netherlands after World War II, and Eddie and his brothers were born there. The children were considered “half-breeds” in the Netherlands, and prejudice and abuse were so strong that the family decided to move to the U.S. They had very little money, and they spent nine days in the lowest quarters of a packed boat to reach California.

They settled in Pasadena in 1962, when Eddie was seven years old. They had to learn to speak English, lived in a house shared with two other families, and his mother worked as a maid and his father worked as a janitor. From his first day in the first grade, his language difficulties set him apart from his classmates. He had known severe prejudice in the Netherlands, but the elementary school in Pasadena was integrated and he was considered a minority student. His first friends were black and the white kids were bullies. He later recounted that, “They would tear up my homework and papers and make me eat playground sand. It was the black kids who stuck up for me.” His father was a musician and he taught all his boys how to play musical instruments. Van Halen later told reporters that he is grateful for his experience as an immigrant. “We came here with approximately $50 and didn’t speak the language. Now look where we are. If that’s not the American dream, what is?”

Career in Music
He never learned how to read music, but learned how to play musical instruments by watching and listening. He was so gifted that he won a classical piano competition at Long Beach College at age nine. His father gave him a set of drums, but he gave them to his brother, Alex, because he wanted to play the guitar. He and Alex formed their first band with three other boys while he was in the fourth grade. By age 17, he was playing regular gigs at Los Angeles night clubs. The band’s first record reached number 19 on the Billboard pop music charts and by age 25, he was famous nationally. His album “1984″ won five-times platinum recognition and the song “Jump” earned a Grammy nomination. They had many successful albums and in 2007, he was inducted into the Rock and Roll Hall of Fame.

Personal Life and Health Problems
In 1980, Van Halen met actress Valerie Bertinelli at one of his concerts and they married and had one son. They were divorced in 2007. In 2008, he proposed to his publicist, Janie Liszewski, and they married the next year.

Van Halen started smoking when he was 12 years old, and he spent his life smoking, drinking heavily, using drugs, and playing in smoke-filled clubs. He went into rehab in 2007 and stayed sober from then on.

His acrobatic stage performances and crashes caused severe hip damage and in 1999, he required a hip replacement.  In 2000, he was diagnosed with tongue cancer and later had surgery to remove 1/3 of his tongue. Over the years, he required multiple surgical procedures and experimental treatments for the cancer that had spread to his throat. During his last year, he was hospitalized several times for chemotherapy and then intestinal blockage, and he died from his multiple cancers on October 6, 2020, at St. John’s Hospital in Santa Monica. He was 65.

Cancers of the Mouth
The American Cancer Society estimates that more than 53,000 North Americans will get mouth cancer this year and 11,000 will die from it.  Symptoms of tongue or throat cancers include:
• non-healing mouth sore
• long-term mouth pain
• cheek lump
• persistent white or red patch on the gums, tongue, tonsil, or lining of the mouth
• chronic sore throat
• difficulty chewing or swallowing,
• numbness of tongue or mouth,
• swelling of the jaw
• loose teeth
• voice changes
• a lump in neck

HPV mouth cancers can often be prevented by getting a vaccine called Gardasil-9 before a person is exposed to HPV. This vaccine also prevents certain genital warts. However, once you are infected with sexually-transmitted HPV viruses, it is too late for immunization.

Treatment of Head and Neck Cancers
Head and neck cancers are often curable if detected early. Surgery is usually prescribed alone before the cancer cells have spread to other areas of the body, or it can be combined with radiation and/or chemotherapy after the cancer has spread. Doctors also use phototherapy, a minimally invasive method that first sensitizes the tumor with special chemicals and then special wave length rays are focused to kill the tumor. Recent breakthroughs include:
• Immunotherapy, especially for HPV-related cancers, which stimulates a person’s own immune system to help kill cancer cells.
• Targeted therapy to destroy epidermal growth factor receptor (EGFR), that drives mouth cancers, while not destroying normal tissue. An example is Cetuximab (Erbitux), a monoclonal antibody that targets the EGFR pathway.
• Nivolumab (Opdivo): a checkpoint inhibitor that targets the PD-1/PD-L1 pathway; approved for subsets of patients with advanced head and neck cancer
• Pembrolizumab (Keytruda): a checkpoint inhibitor that targets the PD-1/PD-L1 pathway.

My Recommendations
• All children should get a vaccine to prevent HPV long before they become sexually active, because once you are infected with HPV, the vaccine does not work.
• Avoid any contact whatever with any form of tobacco
• Do not take in more than a drink a day or do any kind of binge drinking
• Understand the dangers of promiscuous sex
• Do not expose your lips to excessive sunlight
• Check out any long-term mouth infections or other symptoms (listed above)
• Eat a high-plant diet with plenty of fruits and vegetables