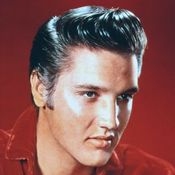 Elvis Presley sold more records than anyone else in the history of recorded music. He was nominated for 14 Grammys and won three, and has been inducted into virtually every music hall of fame. He died at the tragically young age of 42. In the last years of his life, he suffered from obesity, drug addiction, depression, chronic insomnia, glaucoma, high blood pressure, liver damage, rheumatoid arthritis, chronic constipation and an enlarged colon. Every one of these conditions causes inflammation. He died in 1977, nearly four decades before researchers recognized that inflammation is the primary risk factor for heart attacks (J Nat Sci, Apr, 2017;3(4):e341).

Elvis Died from a Heart Attack, Not Constipation
His final concert was held in Indianapolis at Market Square Arena, on June 26, 1977. On August 16, 1977 he fell off a toilet and lay in a pool of vomit. He was rushed by ambulance to Baptist Memorial Hospital, where he died at 3:30 pm CST. His autopsy was performed at 7:00 pm. Approximately 80,000 people lined the processional route for his funeral.

His personal physician, Dr. “Nick” Nichopoulos, claimed that chronic constipation killed Elvis. The autopsy showed that his colon was full of more than 30 pounds of feces. Chronic constipation enlarges your colon, and Elvis’s colon was twice as long and twice as wide as a normal colon. However, you don’t die of constipation without a dramatic amount of warning beforehand. For constipation to kill a person, the colon dies first. Elvis’s autopsy did not show that his colon died because the pathologist did not notice tissue necrosis, a marker of cell death. Also the autopsy did not show a rupture of the colon itself.

I did find several reports of people who died from drug-induced constipation (BMC Psychiatry, October 19, 2006;6:43). However, all of these people had severe cramping with progressively-worsening belly pain. Virtually all people who die of constipation are in such horrible pain for weeks prior to death that they can do nothing but cry and moan. Elvis played racquetball on the day he died. He did not die of constipation; he died after suffering a heart attack.

Inflammation Led to His Heart Attack
The leading cause of heart attacks is inflammation, an overactive immune system. Your immune system is supposed to protect you from invading germs. However, if your immunity stays active all the time, it attacks you with the same chemicals that it uses to kill germs. The chemicals that your immunity uses to dissolve the outer coats of bacteria, punch holes in your arteries. Then these holes start to heal and plaques form in these areas. Many years after the first plaques form in your arteries, your immunity then knocks off a piece of the plaque from an artery into your bloodstream. The broken piece then travels down the ever-narrowing artery to completely obstruct the artery. Also, the inner lining of the wall of the artery from which the plaque broke off bleeds and then a clot forms and extends until it blocks completely the flow of blood. Then the part of the heart muscle that is deprived of a blood supply dies to cause a heart attack.

Evidence That Elvis Had Extensive Inflammation
The autopsy showed that Elvis was massively obese, had extensive plaques in his arteries and had a very enlarged heart. In the last years of his life, he suffered from many heart-attack-provoking factors:
• a high-sugar, high-fat diet
• high blood pressure
• chronic insomnia
• liver damage
• rheumatoid arthritis
• chronic drug addiction

Obesity: As a young man he was a sex symbol who wiggled his attractive body to make the women in the audience shriek and howl. In later life, he became obese with a mind dulled by pain-killing and anti-depressant drugs, and was barely able to get through his last few concerts. Full fat cells in the liver and muscles block insulin receptors to prevent a person’s cells from responding to insulin. Blood sugar levels rise and a high rise in blood sugar causes inflammation that punches holes that start plaques forming in arteries (J Clin Invest, May 2, 2005;115(5):1111–1119).

Heart-attack diet: All his life he ate lots of high-sugar, low-fiber and high-fat foods: pork chops with mashed potatoes, meat loaf, cheeseburgers, sodas and his favorite, peanut-butter and banana sandwiches fried in lard or butter. He loved Eskimo Pies. A pro-inflammatory diet increases heart attack risk (J of the Am Coll of Card, 2020;76 (19):2181).

High blood pressure: He had significantly high blood pressure, but nowhere in my reading was I able to find evidence that he took medication to help lower it (Hypertension, Dec 19, 2020;75:285–292).

Rheumatoid arthritis: He suffered from rheumatoid arthritis, a disease that is characterized by an overactive immune system (inflammation) and is associated with a markedly increased risk for heart attacks (Rheum Dis Clin North Am, May 2010;36(2):405–426).

Chronic insomnia: Chronic insomnia is a major risk factor for heart attacks (Circulation, Aug 2019;140:796–798). It is often associated with obesity.

Liver damage: People who have liver damage are at markedly increased risk for heart attacks (Cells, Feb 2020;9(3):567). His damaged liver turned on his immune system to cause inflammation. His liver damage was most likely associated with his addiction to drugs.

What You Can Learn from the Death of Elvis Presley
• Don’t be overweight.
• Follow a high-plant diet that restricts red meat, sugared drinks, sugar-added foods, and fried foods. Eat large amounts of fruits and vegetables.
• Exercise.
• Try to avoid all drugs, particularly those that can damage your liver.
• Don’t take any pills unless your doctor prescribes them for a specific reason.
• If you have high blood pressure, lose excess weight, exercise, eat a healthful diet, and if your doctor advises it, take medication to lower your blood pressure.
• If you have rheumatoid arthritis, you need to help prevent inflammation by exercising, trying to avoid infections, avoiding overweight and eating a healthful diet.

Aretha Franklin, the Queen of Soul