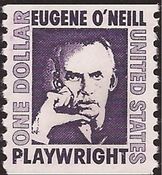 When you were in school, you may have read some of Eugene O’Neill’s more than 50 plays, such as Long Day’s Journey into Night, Desire Under the Elms, or A Moon for the Misbegotten. He was the only American playwright to ever win the Nobel Prize for Literature. He also won four Pulitzer Prizes and had a U.S postage stamp issued in his honor.

He led a depressing life and wrote tragic and sad plays about himself, his family and friends, particularly about people who went wrong and asked for forgiveness. He spent the last 12 years of his life having great physical difficulty writing, and he believed that he suffered from brain damage caused by his years of being an alcoholic. He had persistent shaking and loss of control of his arms and legs, depression, and inability to get along with his intimate associates. His brain damage was finally so severe that he died of pneumonia, caused by his inability to swallow. Food ended up in his lungs, instead of his stomach, and he smothered to death. He died in Boston’s Sheraton Hotel on November 27, 1953, at the age of 65. His last words were, “I knew it. I knew it. Born in a hotel room and died in a hotel room.”

Right to the end, he believed that he was killing himself with his drinking, but 48 years after his death, a Harvard neurologist, Dr. Bruce Price, gave O’Neill the forgiveness that he never received when he was still alive. He examined slides of O’Neill’s brain and determined that O’Neill died from Late-Onset Cerebellar Atrophy, a disorder that had no known cause but that certainly was not caused by alcoholism (New England Journal of Medicine, April 13, 2000;342(15):1126-33).

A Life of Alcoholism and Depression
O’Neill was born in a hotel in New York City, the Barrett House. His father was a noted Irish actor, James O’Neill, who was a severe alcoholic and his mother was addicted to morphine. They were often on tour during his childhood, so he grew up in a Catholic boarding school. He attended Princeton University for less than one year, apparently because he threw a beer bottle into the window of Professor Woodrow Wilson, the future president of the United States. After his brief college career, he worked as a seaman on steamer ships and wrote short pieces for The Telegraph. He was depressed and often drank himself into a drunken stupor. He kept on drinking because each time he stopped, he suffered from delirium tremens, a condition that alcoholics commonly suffer when they try to stop drinking after binging. He would develop terrible head and belly pain, vomit, shake all over, break out in a cold sweat, and feel so sick that he thought that he was going to die. At age 24 he was hospitalized in a sanitarium for tuberculosis, which later served as the basis for his critically-acclaimed masterpiece, Long Day’s Journey into Night. At age 26, he took a drama course at Harvard. He then devoted his life to writing plays, which were first performed by the innovative Provincetown Players in Greenwich Village and ultimately on Broadway.

He Finally Got the Message
At age 40, after binging and withdrawing for many years and showing complete disdain for warnings that he was killing himself, his doctor told him that continuing to drink would leave him impotent and that he would lose his ability to write. This made him realize that he was about to lose his sexuality and his magnificent gift for writing that was the most important activity of his life. After that, he drank rarely and for the last eight years of his life, he did not drink at all. In spite of complete withdrawal from alcohol, his hands shook uncontrollably and he continued to lose coordination. Eventually O’Neill was unable to even read what he had written. He unsuccessfully tried dictation and set out to write 11 plays, but got through only two. Then he gave up on that project and wrote three autobiographical plays: The Iceman Cometh, Long Day’s Journey into Night, and A Moon for the Misbegotten. His hands shook so badly that he could not hold a glass of water without spilling it on himself. He was so shaky that he could not walk and he lost his ability to speak. In 1953, at age 65, he choked on his food and died of pneumonia in a hotel room.

Alcoholism Runs in Families
As a child, O’Neill had seen his alcoholic father and addicted mother mostly during summers. Within a three-year period, both his parents and his elder brother Jamie died, which sent him deeper into depression and drinking. He was married three times and had three children, but was never close to any of his children. His oldest son, Eugene O’Neill Jr., was a Yale classicist who suffered from alcoholism and committed suicide in 1950 at the age of 40. Another son, Shane O’Neill, became a heroin addict and moved into the family home in Bermuda with his new wife, got enough money to buy food by selling the furniture, and then committed suicide by jumping out of a window. O’Neill married the writer Agnes Boulton, had a daughter, Oona, and then left them when Oona was only two years old. O’Neill later disowned Oona for marrying Charlie Chaplin against O’Neill’s wishes, and they never saw each other again. Oona was 18 when she married and Charlie was 54, the same age as O’Neill. The Chaplins had eight children and stayed married until Charlie died at age 88 in 1977. Oona then became a recluse and died from pancreatic cancer in 1991, at the age of 66.

What is Alcoholism?
One in eight North Americans are alcoholics who will drink too much if they drink at all (JAMA Psychiatry, Sept 2017;74(9):911-923). The disease is characterized by the fact that once alcoholics start drinking, they have difficulty stopping and keep on drinking until:
• no more alcohol is available,
• they pass out or
• they do something that gets them into trouble.
The only effective treatment for alcoholism is to:
• have no alcohol available
• have no friends who drink
• not be around anyone who is drinking

Two Lessons from Eugene O’Neill’s Life Story
First, O’Neill died of a condition that was not caused by drinking, so he lived with plenty of guilt that he did not deserve.  The second lesson is that the majority of diagnoses that you may get from a neurologist have fancy names, but usually have no known cause and almost never any effective treatment. Neurological conditions are often named after the doctors who first described them: Nieman Pick disease, Creutzfeldt-Jakob disease, Dandy-Walker syndrome, Friedreich’s ataxia, Gaucher’s disease, Guillain-Barré syndrome, Huntington’s disease, Prader-Willi syndrome, Wilson’s disease and so forth.  Late-Onset Cerebellar Atrophy is otherwise known as Harding’s disease, first described in 1981 (J Neurological Sciences, Aug 1981;51(2):259-271). Knowing all of these fancy names does not help the patients. O’Neill was not diagnosed during his lifetime, and even today there is no treatment for Late-Onset Cerebellar Atrophy, but help is on the way. Some of these neurological syndromes may be caused by genetic conditions or persistent infections. Recent research techniques have made it possible to identify:
• genetic conditions by analyzing the DNA of the effected human cells to find the defect in human genes, and
• infections by analyzing the DNA of viruses or bacteria to finally be able to find them hidden in human tissues.