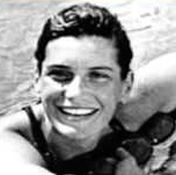 Eva Szekely was brought up in Nazi-occupied Hungary in the 1930s and 1940s. Six million Jews were killed during the holocaust in Europe, including 70 percent of the Jewish population in Hungary. When she was 17, in the winter of 1944, members of Hungary’s fascist Arrow Cross party came to the Szekely’s home and told the family to walk to the banks of the Danube river. Eva’s father knew that the fascists planned to shoot them there, so he told the Hungarian Nazi that he should not kill his daughter because she was Hungary’s national swimming champion. He screamed at her,”Say your name!” and she said, “Eva Szekely.” The guard did not make her walk to certain death, and she noticed that one of his eyes was grey and the other one was brown.

She survived the war and competed in the 1948 Olympics, where she was 4th in the 200 breaststroke, 5th in the 400 free relay, and 6th in the 400 free. In 1950, she won several races at an international swimming competition at Margaret Island in Budapest, and was awarded gold medals by the major of the Communist Political Police (AVO), who had one grey and one brown eye. Szekely recognized him as the same man who had spared her from the death march to the Danube river.  In the 1952 Olympics, she won the gold medal and set an Olympic Record in the 200 meter breaststroke.

During her swimming career from 1940 to 1958, she broke ten world swimming records and five Olympic swimming records, and won Olympic gold in world record time in the 200 meter breaststroke in 1952 and a silver in the same event at Melbourne in 1956. She also won 10 World University Championships and 68 Hungarian National titles, and held 107 Hungarian National records. On February 29, 2020, she died at age 92 of an unknown cause. Before her death she wrote that she was a Jew who never felt that she was accepted in her native Hungary, saying, “No community ever embraced me fully, although I felt in my heart and soul I was part of my community, it was always made known to me that I was an outsider.”

Her Path to Olympic Glory
In 1936, at age 9, Szekely decided to become an Olympic champion when she listened on the radio as a Hungarian swimmer, Ferenc Csik, won the 100 meter freestyle at the Berlin Olympics. She joined her local swimming team and won national titles and set national records, but in 1941, at age 14, she was dropped from the Hungarian National Team and kicked out of her own club team for being Jewish and was lucky to have lived through the next five war years. The Germans entered Hungary and started to exterminate and enslave Jews. She escaped from a forced workforce by jumping into a passing streetcar and was able to find her family hiding in two rooms inhabited by 42 people. They lived in a Swiss-run safe house in Budapest, an area set up in July of 1944 through the intervention of Raoul Wallenberg and Swiss consul Charles Lutz. She stayed fit by running up and down steps all day long. At the end of the war, only 10 of the 42 in that house lived to be liberated.

After the war, Szekely started to train and race again. She swam for the Hungarian team in the 1948, 1952 and 1956 Olympics. She married Dezso Gyarmati, arguably the best water polo player ever, who led Hungary to Olympic gold medals in 1952, 1956 and 1964, silver in 1948, and bronze in 1960 and later became a member of the Hungarian Parliament. They had a daughter, Andrea Gyarmati, who won two Olympic medals, and all three were elected to the International Swimming Hall of Fame.

In 1956, at the beginning of the Hungarian revolt against control by communist Russia, Szekely and her husband left for Melbourne, Australia, to compete in the Olympic games. After they arrived, they learned that Russian tanks had invaded their country. Not knowing the condition of their two-year-old daughter or her parents, Szekely was unable to sleep or eat for a week and lost more than 12 pounds before her competition. She still won the silver in the 200 meter breaststroke in 2:54.8.

Retirement from Competitive Swimming
The next year, 1957, her husband was beaten and left for dead because the new communist government suspected that they were going to leave their native Hungary. Somehow, he survived and they used forged passports to flee to the United States. However, they were so worried about her parents that they returned to Hungary the next year. Szekely retired from active competitive swimming and worked as a pharmacist and a swimming coach. She supervised her daughter Andrea’s swimming training, and at the 1972 Olympics in Munich, Andrea won the silver medal in the 100-meter backstroke and bronze in the 100-meter butterfly. This was the horrible year of the Black September Massacre. One morning Szekely had breakfast with the Israeli wrestling coach, Moshe Weinberg, and the next day, he was killed fighting the terrorists.

Andrea married Mihaly Hesz, the 1968 Olympic canoeing champion, and they had a daughter (Eva Szekely’s granddaughter), Liliana Szilagyi, who was a 2014 Youth Olympic Games champion and the 2016 European Championships swimming silver medalist in the 200 fly.

Inspiration from Eva Szekely’s Life
Szekely wrote three books about her life and experiences, and unlike most Jewish athletes who were victims of the holocaust, she told everyone she was Jewish. In 2004, she was named one of Hungary’s Athletes of the Nation.

Training for international sports requires such dedication that aspiring athletes have little time for anything else. It is incredible how on the rarest occasions, an individual can come through such severe adversity as the holocaust and still be able to maintain complete focus to become an Olympic champion.