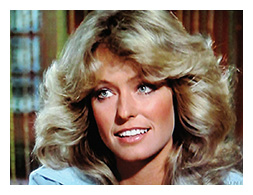 More than 80 percent of North American men and women are infected with HPV viruses and most have no symptoms at all, or they may develop irritation in their genitals or rectum, or grow warts in their genitals, rectum or mouth.  Usually in 6-9 months their immunities are able to kill the virus and they do not develop cancer.  However, a significant number of infected men and women do not get rid of the virus and these people go on to develop cancer more than 10 years after they first acquired the virus.  Since there are more than 150 different HPV viruses and being infected by one HPV virus does not give you immunity or protect you from being infected later on by a different HPV, every sexual encounter is just another chance to pick up HPV and develop cancer.  The HPV vaccine offers no protection whatever after you have already acquired an HPV infection, so you have to get the HPV vaccine before you are exposed to that virus.

From Early Recognition to Star
Farrah Leni Fawcett was born in Corpus Christi, Texas in 1947. She was voted the most beautiful girl at W. B. Ray High School in all four of her years there. During her freshman year in college, she was voted one of the 10 most beautiful women at the University of Texas at Austin and her picture was shown extensively in the media. An agent saw her picture and asked her to come to Hollywood. She elected to stay in school then, but left for Hollywood after her junior year.

Her face was her fortune and she was immediately hired to appear in commercials for large advertisers such as Noxzema, Mercury automobiles and Beautyrest mattresses. Her beauty quickly led to roles in television and the movies. In 1976 she became the star of the "Charlie's Angels" television series and women all over the world imitated her "Farrah hairstyle".

Her beautiful face and hair appeared on magazine covers, bubble gum cards, fashion dolls and just about everything else. A poster of her in a red bathing suit sold an unbelievable 20 million copies. The red one-piece bathing suit, made by Speedo, that she wore in her famous 1976 poster was donated to the Smithsonian's National Museum of American History in 2011.

Marriage and Romances
Beautiful women often date the most popular men.  Fawcett started dating actor Lee Majors in the 1960s and was married to him from 1973 to 1982. She lived with Ryan O'Neal, on and off, from 1979 to 1997 and they had a son, Redmond James Fawcett O'Neal. Ryan O'Neal said that he repeatedly asked her to marry him and she refused until she was on her deathbed. From 1997 to 1998, she lived with Canadian film-maker James Orr until he was charged with, and convicted of, beating her.

Cancer Diagnosis
In 2006, she was diagnosed with and treated for anal cancer with chemotherapy and surgery. Four months later the news media reported that she was cured. In 2007, she was told that she had a malignant polyp at the site of her original cancer. The usual treatment at that time was to try to remove the entire cancer in her anus, which would require a colostomy. She chose however to go to Germany and have surgery and a special treatment for the cancer that had spread to her liver. She returned to Los Angeles for treatments that made her very sick: chemotherapy, laser ablation and chemo-embolization.

In early April 2009, she was hospitalized for a few days and left the hospital with Ryan O'Neal. In May 2009, the Los Angeles Times reported that she was in the last stages of her cancer. On June 25, 2009, she died at age 62 in the intensive care unit of Saint John's Health Center in Santa Monica, California, with O'Neal at her bedside.

Natural History of HPV Infections
When you are infected with HPV, your immune system appears to clear the virus in six to nine months. That does not mean that the virus is gone. It means that doctors cannot find it. After you have cleared any of the more than 150 different HPV infections, you acquire immunity to that specific HPV and may be protected against infection from it in the future. However you are still susceptible to acquiring the other types of HPV as immunity to one type of HPV does not protect you from other types.

With each new sexual exposure, you can pick up any number of the HPVs. The more partners you have, the more likely you are to have many different types of HPV and to have HPV persist. People who have had the most partners are the ones most likely to have a recurrence of HPV in later life, even though they may not be acquiring any new viruses.

How to Avoid HPV
• HPV vaccinations are safe and effective, but you have to be vaccinated before you become infected. Being vaccinated after you become sexually active is often too late to protect you.

• Latex condoms offer some protection but are not foolproof. The virus can travel in all body secretions around the barrier protection of a condom. You can still get HPV even if you use condoms all the time.

• Try to stick to one partner who has an exclusive relationship with you. Each new sexual contact can expose you to several new different types of HPV. The more HPVs you carry at the same time, the higher the risk for cancer.

HPV Diagnosis and Treatment
There are tests to screen for cervical cancer, but there are no approved screening tests to find HPV in the mouth, throat or anus. Doctors rarely order cultures for the specific virus. The vast majority of people do not know they are infected with HPV and develop only itching or bleeding in the genitals or rectum. If you develop genital warts, you know you have HPV. Women often find out that they are infected with HPV only when they have an abnormal Pap test.

There is no treatment for HPV; doctors have treatments only for the health problems it causes. Genital warts can be removed, and cervical pre-cancer can be treated by removing the precancerous tissue.

Farrah's 20-year partner, Ryan O'Neal, stated that: "She didn't smoke, she didn't drink, she exercised every day and she believed in good health." Ryan O'Neal was diagnosed with prostate cancer, but prostate cancer has not been associated with HPV. Farrah Fawcett's elder sister, Diane Fawcett Walls, died from lung cancer just before her 63rd birthday, on October 16, 2001.