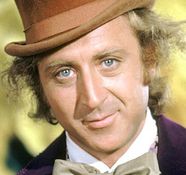 Gene Wilder was a beloved American stage, screen and TV actor who made people laugh just by being himself.  He was also a successful screenwriter, film director and author.  He is best remembered for the movies where he appeared to be naive and childlike:  Willy Wonka & the Chocolate Factory,  Young Frankenstein, Blazing Saddles, Silver Streak, The Adventure of Sherlock Holmes' Smarter Brother,  Everything You Always Wanted to Know About Sex* (*But Were Afraid to Ask), The World's Greatest Lover, Hanky Panky, Haunted Honeymoon, See No Evil, Hear No Evil and more.
In 1999, at age 66, he was saved from nearly certain death from Non-Hodgkin lymphoma by a medical procedure that essentially killed him and his cancer and then brought him back from the brink of death without reviving the cancer.  He died 17 years later from the side effects of Alzheimer's disease.
Early Life
He was born Jerome Silberman at the height of the depression in Milwaukee WI to a Russian Jewish immigrant father and a mother whose parents were Russian immigrants.   When he was eight years old, his mother was diagnosed with rheumatic fever and the doctor told him to "try and make her laugh."   To entertain her, he made funny faces and told jokes.  His older sister was training to be an actress, and he asked her acting teacher to teach him how to act.  The teacher told him to come back when he was 13.  On his 13th birthday, he called that teacher who was so impressed that he immediately accepted him as a student.
At age 15, he performed professionally for the first time in Shakespeare's Romeo and Juliet.  He went on to study theater at the University of Iowa and took acting classes at the HB Studio in New York.  He supported himself as a limousine driver and fencing instructor.  At age 26, he was accepted in the Actor's Studio, and decided he needed a better name.  He wanted to appear smart and well-read, so he chose "Gene Wilder", drawn from books that he was forced to read in college: "Gene" after Eugene Gant in Thomas Wolfe's Look Homeward, Angel and "Wilder" from Thornton Wilder, author of Our Town.   His new stage name appeared on the billboards of several off-Broadway plays.
Film Career
In 1967 at age 33, he appeared in his first film, Bonnie and Clyde.   In 1968, Mel Brooks cast him in his comedy classic, The Producers, and Wilder received a Best Supporting Actor nomination.  In 1971, he had his first leading role as Willy Wonka in Charlie and the Chocolate Factory.  In several of his most memorable movies he partnered with his friend Richard Pryor.  Sidney Poitier said, "For some reason when you pair [Pryor and Wilder], they make a particular kind of magic together . . . they are probably the funniest pair that's ever been on screen."

Wilder directed in The Adventures of Sherlock Holmes’ Smarter Brother in 1975. He wrote the script and starred in The World’s Greatest Lover in 1977, the Woman In Red in 1984 and Haunted Honeymoon in 1986.

Personal Life
His first two marriages, to Mary Mercier and Mary Joan Schutz, ended in divorce. In 1981 at age 48, he co-starred in the appropriately-named comedy “Hanky Panky” with Gilda Radner, a comedienne in the original cast of Saturday Night Live.  Both were married at the time.  After just two weeks on the set, he and Ms. Radner ended up at his hotel room to review their scripts.  She threw him on the bed and told him; "I have a plan for fun."  He claims that he turned her down and sent her home in a cab.  Later she told Wilder, "I knew I was going to fall in love with you and leave my husband".   In his memoir, Wilder recalls saying, "Gilda, you're talking like this is a fairy tale, and you're going to meet Prince Charming, and everything's going to be all right, and we'll both live happily ever after." She answered, "So what's wrong with that?"  In 1982, she divorced her husband and moved in with Wilder, and they married in 1984.

Gilda Radner's Ovarian Cancer
The couple wanted to have children, but she suffered miscarriages.  In 1986, she went to a doctor to find out why she could not sustain a pregnancy. Her only symptoms were that she felt weak and tired, would fall asleep during the day and had pain in her upper legs.  Doctors told her that she had  Epstein Barr, the virus that causes mononucleosis.  After ten months of incorrect diagnoses, she was finally diagnosed with Stage IV ovarian cancer that had already spread through her body.  For the next year and a half, she was treated with chemotherapy and radiotherapy, and doctors told her that her cancer was in remission.   In 1989, the cancer was found to have metastasized through her body and she died on May 20, 1989. In her memory, he helped found an ovarian cancer detection center in her name in Los Angeles.   Even today, with the best of treatments available, fewer than 20 percent of ovarian cancer patients survive for five years.

He was so devastated by Radner's death that he went into semi-retirement, taking only occasional parts in films, plays and TV series.  He remained active as a writer and participated in philanthropical activities for the rest of his life.  In 1991, he married Karen Boyer, a hearing specialist who had coached him in lip reading for the movie See No Evil, Hear No Evil, in which he played a deaf person and Richard Pryor played a blind person.
Non-Hodgkin Lymphoma: Nearly Certain Death
In 1999, ten years after losing Gilda Radner to ovarian cancer, he was diagnosed with a type of cancer called non-Hodgkin lymphoma that put him at high risk for death.  The conventional treatment was radiation and chemotherapy, which kills healthy cells as well as cancerous one.  Wilder chose to have an experimental procedure at Memorial Sloan Kettering Cancer Center:
• Doctors drew all the blood in his body three separate times to withdraw seven million stem cells and then gave him back all the other components of the blood that was withdrawn.
• Then they exposed him to total body radiation in the morning and late afternoon for four days.
• Then they gave him massive doses of chemotherapy poisons for five days.
• He then had a day of rest in strict isolation from germs because the massive doses of radiation and chemotherapy to destroy his cancer also destroyed his immune system, and any infection would certainly have killed him.
• The next day, they gave him back his own seven million stem cells.
In the following weeks he felt miserable, was exhausted and lost all his hair but he recovered to live a normal life and the cancer did not return as far as we know.
Cancer Treatments Now and in the Future
• Cancer cells do not die the way normal cells do, so they crowd out normal cells and destroy them. For example, you die from breast cancer when the breast cancer spreads to your brain, liver, lungs or other places to prevent these organ systems from functioning properly.
• Healthy people produce millions of new cancer cells every day, but their immune systems know that cancer cells are different from normal cells and they use these differences to search them out and destroy the cancer cells in the same way that they search out and destroy invading germs.
• When you develop a cancer, your immunity has failed to search out and destroy these cancer cells.  Doctors treat established cancers with chemotherapy drugs and radiation that kill cancer cells.  The problem is that chemotherapy and radiation also kill normal cells.
• Many localized cancers can be effectively treated and cured by surgery along with radiation and drugs. Cancers that are particularly difficult to treat include those of the ovary, pancreas, and lung.
• When a cancer spreads through your body, it means that your immunity has failed to search out and destroy these cancers, even though they are different from normal cells.
• Research is going on right now to find ways to get your immunity to tell the difference between cancer cells and normal ones and use these differences to search out and destroy cancer cells without destroying normal cells also.
• In the future, I expect invasive cancers to be treated by strengthening your immunity to help your body to search out and destroy cancers, and giving cells and proteins that specifically attack and destroy cancer cells, rather than all cells in your body.

Death from Complications of Alzheimer's
In 2013, he was diagnosed with Alzheimer's disease, but did not make his diagnosis public because he did not want to make his fans sad.  On August 29, 2016, he died at age 83 at his home in Stamford, Connecticut, from complications of that disease.  He died while holding hands with his wife and listening to music.
Alzheimer's disease destroys far more than just your ability to reason and remember. Alzheimer’s kills by causing you to lose your ability to move, swallow, cough and breathe.  It can cause heart attacks, aspiration of food and mucous into the lungs, and inability to fight infections.  The advanced stages of Alzheimer’s disease usually last no more than two years, but in 30 percent of Alzheimer's patients the early stages of the disease last much longer, as much as 20 years.
Gene Wilder (Jerome Silberman)
June 11, 1933 – August 29, 2016