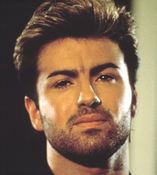 George Michael was an English singer, songwriter and producer who sold more than 115 million records worldwide, making him one of the best-selling music artists of all time.  His solo album Faith sold 20 million copies.  In 2004, the British Radio Academy named him the most-played artist in the period 1984-2004.   On Christmas  morning in 2016, at the young age of 53, he was found dead in his bed with a fatty liver and a huge ballooned heart, called dilated cardiomyopathy, that was too weak to pump blood through his body.
His Meteoric Music Career
Georgios Kyriacos Panayiotou was born in England on June 25, 1963.  His father was a Greek Cypriot who immigrated to Britain and owned a restaurant, and his mother was a British dancer.  In 1981 at age 18, calling himself George Michael, he formed the duo Wham with a high school friend, Andrew Ridgeley.  In 1983 their first album, Fantastic, became the best-selling album in England and they became one of the top acts in the world.  Their second album,  Make it Big, reached number one on the U.S. charts.
In 1987, at age 24, he sang a duet with Aretha Franklin, "I Knew You Were Waiting," which became one of the top hits in the world. He next released his first solo album, Faith, which contained the video and song, “I Want Your Sex."  After it was banned by many radio stations in the US and England as too provocative, he stated that the song was moral because it was "about monogamy, not about casual sex." In the video he used lipstick to write "explore monogamy" on his partner's back.
In the video of "Faith" he played a guitar and wore dark sunglasses, a leather jacket, cowboy boots and Levi jeans. It became the top hit in the U.S. and England, sold more than 25 million copies worldwide and 10 million copies in the U.S. alone. From then on, every album he made turned into gold. In 1988, Michael went on a world tour and sang in an event with Aretha Franklin that grossed almost 20 million dollars.  After that, just about everything he did sold records and filled concert halls as he became one of the most famous pop singers in the world.

His Personal Life
Michael said that he started out dating only women, but when he reached his late teens, he would fantasize about men.  He regularly took drugs and in his early years, he had multiple affairs with men and women until he finally declared that he was homosexual and had relations only with men.  In 1999, he told writers that falling in love with a man ended his conflict over bisexuality.  He decided to give up dating women because he could never give them any commitment and if they found out that he was gay, they would worry that he might have given them AIDS. He had a long relationship with a Brazilian dress designer, Anselmo Feleppa, who eventually died of AIDS.  He dedicated many of his performances to Feleppa with his song "Jesus to a Child".  In 2012, he began a relationship with Fadi Fawaz, an Australian hairstylist and a freelance photographer, who was the person who found Michael's dead body.

Arrests
• 1998.- arrested for engaging in a lewd act in a public restroom in Beverly Hills, California.  fined $810 and sentenced to 80 hours of community service.
• 2006 – arrested, cautioned and released for possession of Class C drugs.  Accused of engaging in public sex at Hampstead Heath in London.
• 2007 – pleaded guilty of drug–impaired driving in London; lost his license for two years.
• 2008 – arrested in London for possession of Class A and C drugs.
• 2010 – arrested for crashing his car into a store in London.  Arrested for driving under the influence of cannabis (also on amitriptyline).  Sentenced to eight weeks in prison, fined and lost his license for five years.

Health Problems and Death
In October 2011, Michael cancelled a performance at London's Royal Albert Hall due to a viral infection. On November 21, he couldn't breathe and was so short of breath that he lost consciousness, requiring a tracheotomy.  He was admitted to the intensive care unit of a hospital for chest pains due to pneumonia and cancelled all performances for the remainder of 2011.   On May 16, 2013, he fell out of his moving car and was taken by helicopter to the hospital. In June 2015, he was admitted to a hospital in Zurich for addiction to marijuana.
On Christmas morning, December 25, 2016, his partner found the 53-year-old singer dead.  The eventual diagnosis was heart failure caused by dilated cardiomyopathy, an infection in his heart, and a fatty liver.
Fatty Liver
Fatty liver means that the liver cells are destroyed and replaced by fat.  Anything that damages your liver can increase your risk for heart attacks, heart failure, diabetes, and premature death.  Liver damage can be caused by:
• Infections such as HIV and hepatitis C.  HIV and the viruses that cause hepatitis are transmitted person-to-person through sperm, blood and body secretions, as well as through blood transfusions.
• Excessive alcohol.  Alcohol can damage every cell in the body. It  is broken down almost exclusively by the liver and can destroy liver cells.
• Drugs. Most drugs go to the liver, which breaks them down.  Excess intake of many types of recreational drugs can damage the liver.
• High blood sugar.  When blood sugar rises too high, your liver converts almost all excess sugar to a fat called triglycerides.  The triglycerides then are carried by the good HDL cholesterol to your liver where they accumulate.  As the fat continues to accumulate, it damages and replaces liver cells to cause a fatty liver.  Most cases of diabetes are caused by fat in your liver.   See Storing Fat in Your Liver Can Kill You
• Obesity.  When a person takes in more calories than he uses, the excess calories are converted to fat which is deposited in the body.  If excess fat is deposited in the liver, the liver cells are damaged to cause a fatty liver.  While Michaels was slim for most of his life, late photographs show him with a significant weight problem.
Recent research shows that many cases of fatty liver can be cured by restricting calories. Severely restricting calories raises GADD45Beta to remove fat from the liver to use it to supply energy for the body (EMBO Molecular Medicine. March 5, 2016).
Dilated Cardiomyopathy
Dilated cardiomyopathy means that the heart muscle is so severely damaged that it is stretched like a balloon and is too weak to pump blood through the body.  It can be caused by:
• cocaine
• amphetamines
• marijuana exposure (American College of Cardiology's 66th Annual Scientific Session.  March 9, 2017)
• alcohol
• infections
• high blood pressure