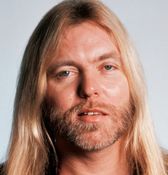 Gregg Allman was a very famous musician, singer and songwriter who, together with his brother, founded The Allman Brothers Band, one of the top bands in America in the late 1960s and the 1970s.  He wrote and played top hit songs including "Midnight Rider," "Melissa," “Whipping Post,"  "Trouble No More," "Blue Sky," "Ramblin’ Man" and "Dreams."
Yet in spite of his fame and millions of dollars in income, he suffered  many health problems that were caused by his lifestyle choices and on May 27, 2017, he died at the very young age of 69, from:
• liver damage and liver cancer, probably caused by a combination of infection with hepatitis C and excess alcohol and drugs,
• pneumonia that was probably caused by the  immune suppression drugs that he had to take to keep his body from rejecting his liver transplant, and
• drug and alcohol damage to his heart, kidneys and other organs in his body.

He spent more than 45 years on the road.  To become a famous popular musician, you have to work and practice all the time, travel from city to city, sleep in buses and hotels and be exposed to crowds of young women who want to sleep with you.  He was nicknamed "Coitus Maximus," for his lifestyle of having sex with as many as four different women a night, having married six times, having five children all with different mothers, some of whom he never married.  Every additional sexual contact risks exposure to hundreds of different infections, some of which have no effective cure today.

To this day, many popular musicians think that drugs and alcohol enhance their performance by removing inhibitions, improving voice quality and projecting their emotions to their audiences, but the likelihood of damage to their health is a steep price to pay.  Allman took many different drugs regularly, and drank alcohol frequently and was often impaired in public. Alcohol is a major risk factor for liver damage and liver cancer, and he had both.
A Lifetime of Tragedies
Allman was just three years old when his father, who had just been promoted to captain in the U.S. Army, offered a hitchhiker a ride home and the hitchhiker shot and killed him.  His mother was a wonderful woman who never remarried.  With two young sons to support, she worked all the time and went to college and eventually became a Certified Public Accountant (CPA). When Allman was 12, he frequently visited Jimmy Banes, his grandmother's neighbor, who taught Gregg how to play the guitar.  Gregg, in turn, taught his older brother Duane to play it and the two of them formed a local band. He was so busy playing and singing in high school that he neglected his schoolwork. From then on, his only work was music. The band would rehearse all day and perform most nights. He skipped his high school graduation because he was too busy performing. He intentionally shot himself in the foot to avoid getting drafted into the Vietnam War.
He and his older brother formed several bands.  One called The Allman Joys was an instant success, performing to enraptured audiences near their home in Daytona and throughout the southeast, then on to Nashville, St Louis, Los Angeles and more.  They sold lots of records and made lots of money.
In 1971, when Gregg was 24, his brother was killed in a motorcycle accident and the next year his bass player, Berry Oakley, also died in a motorcycle accident very close to the location of Duane's crash.  The band struggled with the use of heroin and cocaine and his road manager for security, Scooter Herring, was convicted of distributing cocaine and was originally sentenced to 75 years in jail.  Gregg was also charged, but was offered leniency if he would testify against Herring. Gregg did testify and several drug people threatened to kill him. The other members of the band were furious with him for testifying and the band broke up. Many years later, the band's drummer, Butch Trucks, shot himself in front of his wife.

Marriage to Cher
In 1975, Allman married Cher but she filed for divorce seven days later. Evidently she changed her mind and they had a son who became a very good musician.  The couple went on a tour together, but Cher cancelled the tour and they were divorced after three years of marriage.  Greg responded by moving in with his mother and having lots of affairs.  He was still a very popular musician but alcohol and drugs were destroying every aspect of his life.  He was arrested for drunken driving and spent a lot of time in his forties riding on his motorcycle.  In 1995 at age 48, his band was inducted into the Rock and Roll Hall of Fame, but he was so drunk that he never made it for his acceptance speech.   The next year, his tour bus crashed and injured several people.  In 1996, members of the band fought so much that they finally broke up.

Declining Health and Death
In 2007 at age 60, he was diagnosed with hepatitis C, which caused him to be so exhausted that he slept for about 11 hours a day. In 2008, he was diagnosed with cancer of the liver and in 2010 he received a liver transplant.  To accept someone else's liver, you have to receive drugs to suppress your immunity, and that led to pneumonia and lung surgery.  He developed atrial fibrillation, an irregular heartbeat, and his doctor recommended that he switch to a vegan diet.
In both 2016 and 2017, he cancelled his scheduled tours and offered refunds to those who had already bought tickets.  He had always been a very hard worker, but his lifestyle of drugs, alcohol, promiscuous sex and going without sleep had taken its toll, causing or aggravating incurable hepatitis C and drug-induced damage to his liver, heart and kidneys.  The liver transplant required him to take drugs that suppress immunity, and anything that interferes with your immune system can lead to pneumonia and other infections, permanent damage to all his organs that include irregular heartbeats, and eventually death from cancer of the liver that spread through his body.