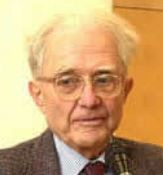 Gustav Born was a physician and pharmacologist who taught the world about blood clotting. In 1945, he was posted as a British army doctor in Hiroshima, and noticed that most of the survivors of the atomic bomb suffered from chronic bleeding.  He demonstrated that exposure to radiation destroys the body's platelets to cause bleeding and laid the basics for treatment of bleeding and clotting disorders, some of which are still used today.
In a lifetime of research, he made major breakthroughs in histamine, stomach acid secretion, how involuntary muscles work, how adrenaline works and much more.  He demonstrated how aspirin helps to prevent heart attacks and strokes, how high blood pressure can cause heart attacks, and how plaques break off, which causes clots to form resulting in heart attacks. He showed how white blood cells help to prevent infections.
Brilliant achievements often come from having outstanding genes and being exposed to brilliant people.  The number of famous and brilliant people in Gustav Born's family is impressive and the creative genius of their close friends and colleagues is almost unbelievable (Lancet, August 4, 2018;392(10145):380).
Refugees from Nazi Germany
Gustav was the son of physicist Max Born, who received the Nobel Prize for his work on quantum mechanics and whose friends included two of the greatest physicists of all time, Werner Heisenberg and Albert Einstein.  In 1933, when Gustav was 12 years old, Hitler came into power in Nazi Germany and his father lost his job as physics professor because he was Jewish.  Gustav Born remembers his classmates refusing to play with him and hitting him because he was Jewish.
Albert Einstein told them to leave Germany immediately. These were horrible times, but some non-Jews showed great courage.  Nobel prize winner Max von Laue, who was not Jewish, suffered greatly for supporting his Jewish colleagues.  World famous and Nobel Prize winning physicist Max Planck went to see Hitler in person to ask him to let Jewish scientists keep their jobs, but Hitler "foamed at the mouth and wouldn't let him talk any more". Sixteen Jewish refugees who fled Nazi Germany went on to win Nobel prizes.
The Born family moved to Cambridge University in England, then to the University of Edinburgh where Max Born became professor of physics.  Gustav was a brilliant student who could have studied anything, but his pacifist father encouraged him to go to the university's medical school so he could avoid having to kill anyone in the coming war with Germany. His grandfather was also a physician.
He was graduated from medical school in 1938 and completed a surgical residency.  After the war, he worked under the tutelage of Nobel prize-winner Howard Florey at Oxford University, where he made his major discoveries on platelets.   He invented an instrument to measure platelets that could have made him a wealthy man, but he refused to patent it.  Like his mentor, Howard Florey, who did not patent penicillin, he felt that it was more important to help mankind than to make money. (Florey and Ernst Boris Chain shared the Nobel Prize in Physiology or Medicine in 1945 with Alexander Fleming for the discovery of penicillin.)  With his many inventions and discoveries, Gustav went on to become Professor of Pharmacology at the Royal College of Surgeons of England, Cambridge University and King's College London.  He teamed with Nobel Prize winner John Vane, who discovered prostaglandins, to found the William Harvey Research Institute at Barts and the London School of Medicine.  He was also a talented musician who played the flute at  concert-quality level. His father and other members of his family were also very talented musicians.
The Amazing Born Family
Great-grandfather:  Marcus Born (1819-1874) was an innovative public health physician in the Silesian city of Görlitz, responsible for major improvements in the control of epidemics.
Grandfather:  Gustav Born I(1850-1900) was an extraordinarily original embryologist working in Breslau. He discovered new characteristics in hybridized amphibians, environmental influences on the sex ratio, developmental abnormalities in mammalian hearts, and–most importantly–the endocrine function of the corpus luteum, which through progesterone was one of the starting points of the contraceptive pill.
Father: Max Born (1882-1970) taught many of the American physicists who went on to emigrate from Germany to help develop the atomic bomb before Germany could do so: Robert Oppenheimer, Wolfgang Pauli, Otto Stern, Edward Teller, Victor Weisskopf and Norbert Wiener.  He established the principles of solid state physics, and in the 1920s created in Göttingen an outstanding school of theoretical physics. His assistants and students included Max Delbrück, Maria Göppert-Mayer, Werner Heisenberg, Pascual Jordan, Robert Oppenheimer, Wolfgang Pauli, Otto Stern, Edward Teller, Victor Weisskopf and Norbert Wiener. After emigrating to Britain in 1933, Max Born continued with scientific work in Cambridge and Edinburgh. He was awarded the Nobel Prize in 1954 for his contributions to quantum mechanics. In retirement, he devoted himself to promoting awareness of the social and political consequences of science.
Mother: Hedwig Martha Ehrenberg (1891–1972), poet and close friend of Albert Einstein. She was the daughter and granddaughter of two famous German jurists, Victor Ehrenberg and Rudolf von Jhering.
Wives and children: Born's first marriage was to Dr. Ann Plowden-Wardlaw, a medical doctor and Kleinian psychoanalyst. In 1962, he married Dr. Faith Maurice-Williams.  His oldest son, Max, is a musician and his second son, Sebastian, was the literary director at the National Theatre. His daughter, Georgina, was a member of the 1970s avant-rock group Henry Cow and now is Professor of Sociology, Anthropology and Music at the University of Cambridge.  From his second marriage, his daughter Carey is a film maker and his son Matt is a former journalist who now directs a TV company.
Niece, nephew and cousins: Singer-actress Olivia Newton-John, actor Max Born (Fellini Satyricon), songwriter Brett Goldsmith, singer Tottie Goldsmith, racing car driver Emerson Newton-John and singer Chloe Rose Lattanzi.
Lessons from Gustav Born's Long and Productive Life
Choose your parents wisely and cultivate lots of interesting friends.
Gustav Victor Rudolf Born
July 29, 1921 – April 16, 2018