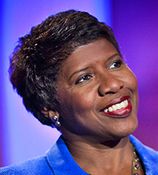 On November 14, 2016, Gwen Ifill, a noted American journalist, television newscaster and author, died at age 61 of uterine cancer. She was a political analyst who was featured on Public Television's Washington Week and PBS NewsHour, and moderated the 2004 and 2008 U.S. vice-presidential debates.  She is the only known Washington journalist who covered the Department of Housing and Urban Development who had lived in federally subsidized housing.  She told coworkers: “I make more money in a week than my father did in a year.”
Education and Career
She was born in New York City as the fifth child of an African Methodist Episcopal minister who came to the United States from Panama and a mother who came from Barbados. The family was very poor and had to live in subsidized housing as they moved constantly all over the East Coast for her father to find work.  In spite of being brought up in poverty, she persisted in her studies and in 1977 was graduated from Simmons College in Boston, Massachusetts. After college, she was hired as a reporter successively by the Boston Herald-American, the Baltimore Evening Sun, the Washington  Post and the New York Times.   In 1994, at age 39, she got a major break when Tim Russert, NBC’s anchor on "Meet the Press," helped her to be hired by NBC television. In 1999 at age 44, she was featured on the PBS television program Washington Week in Review.  Her first book, The Breakthrough: Politics and Race in the Age of Obama, was published on January 20, 2009.

A year ago she was diagnosed with uterine cancer, but kept the information private so very few of her colleagues knew she was ill.  She would go to work at "Washington Week" the  day after receiving chemotherapy, collapse on the weekends and then go back to work on Monday.  She never married and had no children.
Signs and Symptoms of Possible Uterine Cancer
• Vaginal bleeding after menopause
• Bleeding between periods
• Bleeding after intercourse
• Watery or blood-tinged discharge from vagina
• Pelvic pain
Risk Factors for Uterine Cancer
Women have two major sex hormones: estrogen stimulates the inner lining of the uterus to grow, and progesterone stops that stimulation. If a woman has an increase in estrogen or a decrease in progesterone for any reason, the uterus can be stimulated into uncontrolled growth which is cancer.   Factors that increase uterine cancer risk include:
• Anything that increases years of menstruation: starting menstruation before age 12 or starting the menopause later than age 52
• Never having been pregnant.
• Older age – uterine cancer occurs most often after age 50.
• Excess weight – fat cells produce estrogen to increase exposure to estrogen. About 40 percent of cases of uterine cancer are in women who are overweight.
• Diseases or conditions that increase estrogen such as irregular periods, polycystic ovary syndrome or diabetes
• Taking estrogen but not progesterone after the menopause
• A rare type of ovarian tumor that secretes estrogen
• Two to five percent of women with uterine cancer have Lynch Syndrome, an inherited colon cancer syndrome called hereditary nonpolyposis colorectal cancer.
• Having received hormone treatment for breast cancer (tamoxifen)
• Race – Caucasian women are more likely to develop uterine cancer than black women
• Genetics – uterine cancer can run in families
• A history of other cancers – women who have had breast cancer, colon cancer or ovarian cancer are at increased risk for uterine cancer and may have gene mutations such as PTEN, MLH1, MSH2, MSH6, PMS2, and possibly BRCA1/2.
• Having had radiation therapy for another cancer in the lower part of the abdomen increases risk for uterine cancer
• Dietary factors – a diet high in animal fats and low in fruits and vegetables increases risk
Factors that Decrease Risk for Uterine Cancer
• Taking birth control pills for more than five years – Progesterone in birth control pills helps prevent uterine cancer
• Avoiding overweight
• Avoiding diabetes or controlling diabetes effectively with lifestyle changes
Gwen Ifill
September 29, 1955 – November 14, 2016