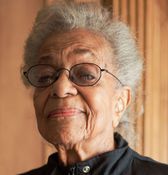 Two years ago, Ida Keeling (born May 5, 1915) set the world record for a 99 year old woman in the 100-meter dash at 59.80 seconds. At age 95 she set the world record for running 60 meters at 29.86 seconds.  Her brain matches her athletic prowess.  She can recall names and dates immediately. Running as she ages has given her life more meaning and purpose, which is very important as she probably has many more years to live, Her father’s mother lived until the age of 104. She is now a celebrity who continues to break world records in running.
Not an Easy Life
Life had not been easy for this grand lady. She lost her mother when she was a small child. She did not run in school because there were no running programs for girls.  Until Title IX legislation came along in 1972, virtually all school sports were for boys only.
She was 15 years old when the Great Depression hit, and her father lost his neighborhood grocery store and had to sell fruits and vegetables from a pushcart.  Her family had to move from the back of her father’s grocery to terrible living quarters.  She worked washing windows and babysitting.
To have a purpose in life, she worked in the civil rights movement and took her four children to Malcolm X speeches and even attended the 1963 March on Washington.  She lost her husband when he died suddenly of a heart attack at age 42 and she had to raise their children by herself. The family moved into a one-bedroom apartment in a Harlem housing project and she worked sewing in a factory.  Two sons, Charles and Donald, were killed in drug-related incidents in 1979 and 1981.  Her poverty overwhelmed her and she became depressed.
Her daughter, Shelley Keeling is a lawyer who is also an accomplished competitive distance runner.  She has won many races and has been the track and field coach at Fieldston High School for 21 years.  In 1982, she entered her 67-year-old mother in a five-kilometer (three-mile) race in Brooklyn. Untrained and out-of-shape, Ida Keeling finished the race smiling and happy.  Two years later, she won her first race and has been winning ever since.  Running relieved her depression and made her feel wonderful. Today, like many other runners, she is hooked on running because it makes her feel so good when she finishes. In her more than 30 years of competitive running, she has competed all over the world.
Her Excellent Running Form
It is amazing how smoothly this 100-year-old woman runs.  Most older people cannot run because the force of their feet hitting the ground breaks bones and tears muscles.  When they do run, their form is usually awkward and inefficient.  Runners of all ages suffer more injuries than football players do because of the tremendous repetitive force of their feet hitting the ground.   When you run at six-minute-mile pace, your feet hit the ground with a force equal to three times your body weight.  Take a look at Ms. Keeling’s incredible coordination that allows her to take shorter strides, which markedly reduces the force of her foot-strike and helps protect her from injuries
Her Healthful Lifestyle
In an era where more than 75 percent of North Americans are overweight and more than 50 percent are diabetic or prediabetic, Mrs. Keeling is  healthy and packs 83 pounds into her svelte 4-foot-6 inch frame.   Her diet follows the rules for longevity:
• most of her calories are eaten at breakfast
• she eats lots of fresh produce, fish and liver, and very limited amounts of meat
• she avoids foods with preservatives, other processed foods
• she skips dessert
She says that she “eats for nutrition, not for taste.”  She does drink limited amounts of alcohol.    She lives alone and is totally self-sufficient; she says, “I wash, cook, iron, scrub, clean, mop and shop.”
Ida Keeling is a model for us all.
Ida Keeling
Born May 15, 1915
New York Times, April 22, 2016