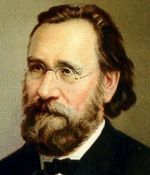 This is the story of a world-famous scientist who noticed that the Bulgarian peasants in Eastern Europe lived to very old age, that they ate yogurt every day, and that yogurt is loaded with lactobacilli bacteria. He published his theories on aging in Nature of Man (1903), Studies in Optimism (1907), and Forty Years’ Search for a Rational Outlook (1913). He claimed that people could prolong their lives by eating fermented foods, which appears to be true, but he explained incorrectly that this benefit was due to lactic acid-producing bacteria in yogurt that would acidify the intestines to suppress the growth of harmful Clostridia bacteria, and break down protein to produce toxic substances that were absorbed into the bloodstream (“auto-intoxication”) to cause aging (Front Public Health, Nov 13, 2013;1:52).

He believed that people could prolong their lives by eating the “Bulgarian Bacillus” that would replace these harmful Clostridia bacteria. His auto-intoxication theory started the concept of probiotics: swallowing certain healthful bacteria to prolong life and preserve health. At that time people were harming themselves by trying to get rid of colon bacteria with frequent enemas or harmful drugs that caused fulminating diarrhea. Enemas were a major part of John Harvey Kellogg’s program at his sanatorium in Battle Creek, Michigan, where Kellogg treated the Roosevelts, Fords, Chryslers, Rockefellers and hundreds of other prominent people in the early 20th century. Some surgeons even killed healthy patients by removing their colons “to prolong life.” The world took Metchnikoff’s incorrect theory of auto-intoxication seriously because he was the head of the very famous Louis Pasteur Institute in Paris. His studies inspired the Japanese scientist Minoru Shirota’s discoveries about the relationship between certain bacteria and intestinal health, which led to the marketing of kefir and other fermented milk products.

His Life Story
Metchnikoff was born on May 16, 1845, near Kharkoff in Ukraine, Russia. In 1867, at age 22, he joined the faculty at the University of St. Petersburg. In 1888, Metchnikoff moved to the Pasteur Institute in Paris, and in 1904, he became the deputy director of that institution and stayed there for the rest of his life.

At age 38, he discovered phagocytosis: how white blood cells eat bacteria to prevent them from growing and multiplying in your body. In 1908, at age 63, he won the Nobel Prize in Medicine for this discovery. In 1916, he died at age 71 of heart failure.

Disproving the Auto-Intoxication Theory
His auto-intoxication theory held force from the early 20th century until 1921, when Dr. Retteger at Yale demonstrated that “Bulgarian Bacillus” (Lactobacillus bulgaricus) in fermented foods could not survive in the human gut, no matter how much yogurt people ate. As a result, Metchnikoff’s theory of auto-intoxication was disproved and many lives were saved or improved by stopping the surgical removal of colons, the frequent use of enemas, and prescription of toxic substances to kill colon bacteria. In 1935, scientists demonstrated for the first time that another bacteria, Lactobacillus acidophilus, could live permanently after it was placed in the human colon. Other studies followed to show that certain healthful bacteria could help to prevent disease and prolong lives.

Probiotics and Prebiotics Today
Today doctors can transplant healthful bacteria taken from the colons of healthy people into those with clostridia infections that fail to respond to other known treatments and cause unremitting bloody diarrhea (N Engl J Med, 2013;368:474–510). The term “probiotic” was first used in 1953 to describe healthful bacteria found in foods that can grow in the intestines to improve health and perhaps prolong life. Prebiotics are non-digestible parts of plants, such as soluble fiber, that travel to the colon and stimulate the growth of healthful bacteria in the colon. Soluble fiber cannot be absorbed in your upper intestines, but your colon is full of healthful bacteria that break down soluble fiber to form chemicals such as short chain fatty acids (SCFAs). SCFAs are absorbed through your colon into your bloodstream and travel to your liver where they block the liver from making cholesterol and thus help to prevent heart attacks. SCFAs also reduce inflammation, so they help to control the bloody diarrhea and ulcers caused by Crohn’s disease. They may reduce swelling and pain of conditions such as arthritis, diabetes or psoriasis, and may even improve your immunity to help you to kill germs. Soluble fiber is found in legumes (beans, lentils, peas and peanuts), whole grains such as oatmeal and barley, and many fruits and vegetables.

If You Have Chronic Diarrhea, Constipation or Gas
People who have gas, bloating, diarrhea, cramps or constipation may have a treatable disease. Check with your physician. You could have an allergy to gluten in wheat, rye and barley which can be cured just by avoiding these grains. Even if your doctor cannot find a cause for your symptoms, you may benefit from a diet that increases the growth of good bacteria: lots of fruits, vegetables, whole grains, beans, seeds and nuts, and avoidance of sugar-added foods and all drinks with sugar, including fruit juices.

If you suffer from constipation, check with your doctor to see if you have thyroid disease, an intestinal obstruction or something else that may cause it. If you have no disease, the odds are overwhelming that you can be cured by exercising, avoiding white flour and bakery products, eating a high-fiber diet that includes beans and whole grains, and drinking plenty of fluids that do not contain sugar.

Some people suffer explosive bloody diarrhea from an infection with a bacteria called C. difficile. These people can often be cured by taking an antibiotic to kill that germ, or by taking healthful bacteria taken from a healthy person’s intestines. However, this should be done only under the expert care of a doctor trained to do it.

The Future of Healthful Gut Bacteria
Today, I recommend that you get your prebiotics and probiotics from the foods in a healthful diet, not from prescription drugs or over-the-counter supplements.