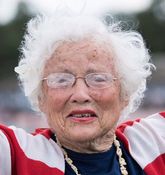 My report on Exercisers Have More Stable Plaques, showing that vigorous exercise in later life helps to prevent heart attacks by stabilizing plaques, should be a strong stimulus for people to continue exercising at any age.
This week at the USA Track and Field Championships for men and women over 30, 101-year-old Julia “Hurricane” Hawkins won her age-group 100 meters race in 40.12.  She holds the World Record for 100-year-olds in the 100 meters at 39.62, an age-group world record by six seconds.  The women’s 1500 meter race also had some very fast age group records.  Here are the women's 1500 meter winners with their equivalent mile times:
• 46-year-old Sonja Friend-Uhl: 5:00.31 mile
• 52-year-old Judy Stobbe: 5:31.24 mile
• 68-year-old Sabra Harvey: 5:59.98 mile
• 80-year-old Jeanne Dapranoran: 8:44.93 mile.
World Record 105-year-old Bicycle Racer
In my opinion, Robert Marchand is the most amazing senior athlete of all time and marathon runner Ed Whitlock is a close second.  At age 105, on January 4, 2017, Marchand rode his bicycle an incredible age-group-world-record of 14.01 miles in one hour, to a standing ovation of "Robert, Robert," while dozens of TV cameramen captured the moment.    When he was 102, he rode 16.73 miles in one hour to set the world record for men over 100.   No one over 100 had ever recorded riding that distance before him, and the record still stands.  Most 20-year-olds cannot average anywhere near his 16.7 miles per hour for one hour.  A scientific review of world records in many different sports by people over 100 calls Marchand's one-hour-track-cycling the "best sports performance ever achieved by a centenarian" (Age Ageing, Nov 3, 2016;45(5):729-733).  It is 50.6 percent of the current world record for that event for any age: 33.88 miles, set by 35-year-old Bradley Wiggins in 2015.
World Record Senior Marathon Runner
Canadian Ed Whitlock was the first person over 70 (at age 73) to run a marathon in less than three hours (2:54:48). A review of world records for running shows that his time adjusted for age is equivalent to running a marathon in a person's prime in 2:04:48, less than two minutes off the present world record of 2:02:57. As a schoolboy in London in the 1940s, Whitlock ran a mile in 4:34 and then stopped running. He took up running again in his 40s. At age 48, he ran his fastest marathon, in 2:31. On October 17, 2016, at age 85, he ran the Toronto Waterfront Marathon in 3 hours 56 minutes 34 seconds to become the oldest person ever to run 26.2 miles in under four hours.  Whitlock died of prostate cancer at age 86, on March 17, 2017.
My Recommendations
• Vigorous exercise in later life helps to prolong lives and prevent diseases. Specifically it stabilizes plaques in arteries to help prevent heart attacks.  See  Even a 100-Year-Old Can Improve with Training
• Caution: If you have plaques blocking your arteries, vigorous exercise can cause a heart attack.  Before you start an exercise program or plan to increase the intensity of your existing program, check with your doctor.