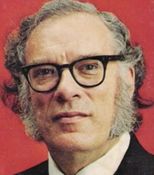 Isaac Asimov probably had more of his writings published than any other person in history with more than 500 books, mostly science fiction and popular science. As a child, he was short, fat and uncoordinated and never learned to swim or ride a bike. As an adult, he spent an incredible amount of time by himself, reading, collecting data and writing about what he had learned. The only breaks he took were the result of persistent urging by his family to take a vacation once a year. He had neither time nor interest in exercise, gained more weight as he aged, and ate the typical North American diet loaded with meat, fried foods and sugared foods and drinks. Prolonged sitting is a major risk factor for heart attacks. His unhealthy lifestyle eventually caused him to suffer heart attacks and he died of HIV that he acquired from a blood transfusion given to him during bypass surgery to treat the blocked arteries leading to his heart.

Early Life and Education
Asimov was born in Russia and emigrated with his family to the United States when he was three years old. He never learned Russian because his parents spoke only Yiddish and English at home. (I can relate to Asimov’s childhood experiences: my immigrant parents were afraid that people would think that they were communists if they spoke Russian.) His father required his children to work in the family candy store. Isaac compensated by spending most of his time there reading science fiction magazines. (My father’s family income also depended on the candy they sold from a store in their home.)

At age 11, Asimov wrote his first story and at age 15, he was graduated at the top of his high school class. Because of a restrictive quota on Jewish students in the 1930s, he was turned down by Columbia University, so he went to Seth Low Junior College in Brooklyn. While there, at the age of seventeen, he wrote a story called “Cosmic Corkscrew.” His wise father told him that if he submitted the story by mail, nobody would read it and it would be rejected. Besides, mailing the story would cost twelve cents while round-trip subway fare cost only ten cents. With great trepidation, Asimov took the subway to save two cents. A secretary took him into the office of John W. Campbell, the editor of Astounding Science Fiction. Campbell talked with Isaac for more than an hour and told him that he would read the story. Two days later Asimov received his rejected manuscript with recommendations for improvement. This encouraged him to keep on writing, and by age 19 he had several articles accepted by science fiction magazines.

He wanted to become a doctor, probably because, like me, his only contact with a financially-successful person was with the local family doctor. He was turned down at the medical school and chemistry department at Columbia University, again presumably because of their Jewish quotas. Later he was accepted by the department of biochemistry at Columbia and received a master’s degree in 1941. After three years in the army, he returned to Columbia’s chemistry department. In 1948, while still a student, he wrote an article about a fictional chemical, “The Endochronic Properties of Resublimated Thiotimoline”. As he did not yet have his Ph.D., he was afraid that an article about a chemical that did not exist would upset the faculty and they would not give him his Ph.D. At the end of his oral examination to be granted a Ph.D. in chemistry, one examiner asked, “What can you tell us, Mr. Asimov, about the thermodynamic properties of the compound known as thiotimoline?” Terrified that this could prevent him from getting his Ph.D., he did not answer the question and was led out of the room. After a five-minute wait, he was called back into the examination room and was reintroduced as Dr. Asimov.

Professor of Chemistry and Famous Writer
He then went to work for Boston University School of Medicine. In 1958, he was making so much more money from his books and articles than from being an assistant professor of chemistry that he stopped coming to his laboratory. He was so famous that Boston University was delighted with the publicity from their association with him and made him a tenured full professor of chemistry .

He was one of the most famous science fiction writer of all time, but he also wrote on a wide array of non-fiction subjects. In 1952 he co-authored a college textbook called Biochemistry and Human Metabolism. After the satellite “Sputnik I” was launched by the USSR in 1957, he wrote about space and continued to produce scientifically solid books about astronomy, physics, biology, chemistry and mathematics. In addition to his science fiction classics such as the Foundation series, his best sellers included books on:
• anatomy (The Human Body, 1963)
• religion (The Old Testament in 1967, The New Testament in 1969, and a 1,300-page combined book in 1981)
• history (14 popular history books, including The Greeks: A Great Adventure (1965), The Roman Republic (1966), The Roman Empire (1967), The Egyptians (1967) and The Near East and 10,000 Years of History (1968))
• literature (Asimov’s Guide to Shakespeare (1970), Asimov’s Annotated Paradise Lost (1974), The Annotated Gulliver’s Travels (1980))
• limericks (Lecherous Limericks, Limericks Too Gross)
• Yiddish humor (Azazel, The Two Centimeter Demon)
• sexuality (The Sensuous Dirty Old Man)
• autobiography (In Memory Yet Green (1979) and In Joy Still Felt (1980). A third autobiography, I, Asimov: A Memoir, was published in 1994 by his widow, Janet Asimov, after his death. He also wrote an estimated 90,000 letters.

Personal Life, Illness and Death
In 1942, Asimov married Gertrude Blugerman, who was three years older than he was, and they had two children. In 1970, they separated and in 1973, he married Janet O. Jeppson, who was also a writer.

Asimov suffered a heart attack in 1977, and had triple bypass surgery in 1983. When he died at the age of 72 in 1992, the cause was listed as heart and kidney failure. However, ten years later, his wife told the world that he had died from HIV caused by a blood transfusion he received during his bypass operation. He had avoided announcing that he had HIV because of the stigma attached to the death of famous tennis player Arthur Ashe, who had acquired HIV the same way: through a blood transfusion during heart bypass surgery. Asimov was not sexually promiscuous and did not use intravenous drugs.

What You Can Learn About Your Health from Isaac Asimov
Lifestyle changes are far more important than drugs in preventing and treating heart attacks. More than 40 percent of North Americans die of heart attacks, largely because they:
• sit or lie down too much and move around or exercise too little,
• stay indoors too much so their bodies make too little vitamin D,
• eat too much sugar-added foods and sugared drinks, red meat and fried foods, and too little fruits and vegetables,
• weigh too much, have too little muscle and too much fat.

Don’t let yourself get to the point where you need bypass surgery or stents. Stents markedly increase risk for suffering clots and subsequent heart attacks and strokes. See my report on Too Many Stents .  Major bypass surgery can cause bleeding, general anaesthesia can damage your brain, and the surgery will disable you for a long time.

Try to avoid getting blood transfusions unless you need them to save your life. Isaac Asimov got HIV from his blood transfusion. Today the blood supply is clear of HIV, but you can still get fatal blood mismatches or infections that cannot be detected by any available laboratory tests.