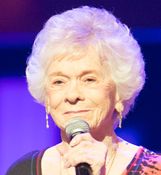 On September 29, 2016, country music lost one of its all-time greats.  Most of you have heard Jean Shepard singing "A Dear John Letter" with Ferlin Husky, the first post-World War II record by a female country singer to become the number one country song and sell more than a million records.  It tells of a girl who writes to her soldier boyfriend fighting in Korea that she is going to marry his brother who did not have to go to war.
In 1955, Shepard joined the Grand Ole Opry and continued to perform there for 60 years.  In later life, she was incapacitated by Parkinson's disease and the associated heart problems that eventually killed her at age 82.
Early Years
Shepard was born in 1933 into incredible poverty during the great depression, in Pauls Valley, a small "dust bowl" town in Oklahoma where people were starving.  Her parents had 10 children to support with no way to earn a real living, so they moved to Visalia, California, about 80 miles north of Bakersfield.   Their only entertainment there was listening to the Grand Ole Opry on a battery-powered radio on Saturday night.   When Shepherd was 15, her wonderful supportive parents sold their furniture to pay for a bass fiddle so she could sing and play in an all-girls band called The Melody Ranch Girls.

She met country music star Hank Thompson and told him she wanted to be a country star. He told her, "There ain’t much room in this business for a woman country singer."  She recalled telling him that, "There weren’t nothing going to stop me doing what I wanted to do, which was singing traditional country music the way it’s supposed to be sung." He was so impressed with her that he called Capitol Records.  True to form, they were not interested in her because she was a woman, but Hank pressured them to listen to her sing and they liked what they heard.
Her second record, "Dear John Letter," a duet with Ferlin Huskey, became her most famous and best-selling record.  At that time, she was under age 21 and therefore a minor who could not travel across state lines without her parents. To go on tour to publicize her records, her parents had to "give her up" and make Ferlin Huskey her legal guardian.  At age 22, she sang on ABC-TV's nationally-telecast Ozark Jubilee and at the Grand Ole Opry in Nashville.  At age 31, she came out with her second most popular song hit, "Second Fiddle (To an Old Guitar)".

A few years before her death, TV singer Blake Shelton said that fans of traditional country music were "old farts and jackasses".  She replied, "We’ve got a young man in country music who has made some pretty dumb statements lately that traditional country music is for old farts and jack-you-know-whats.  Well, I guess that makes me an old fart. I love country music. I won’t tell you what his name is — but his initials is BS — and he’s full of it!"
Marriages and Children
She met fellow country singer Hawkshaw Hawkins and married him in 1960.  In 1963, Hawkins died in a plane crash that also killed country singers Patsy Cline and Cowboy Copas. At the time of the crash, she was eight months pregnant with their second son.  In 1968, she married another country singer, Benny Birchfield, and had another son.  They remained married until her death.
Her Later Years
In 2011, at age 78, she was voted into the Country Music Hall of Fame. Her autobiography, "Down Through the Years", was published in 2014.  In 2015 at age 82, she celebrated her 60th year with the Grand Ole Opry and retired.  She was already suffering from Parkinson's disease and went downhill quickly.  She died on September 29, 2016, at age 82.

Parkinson's Disease
I do not have access to Shepard's medical records, so the following is a general explanation of Parkinson's disease and its current treatments.
Parkinson's is a disease that usually starts in people over the age of 50 and occurs more frequently with increasing age. The cause is not known.
A part of the brain called the substantia nigra makes dopamine, a chemical that sends messages from the brain across nerves in the spinal cord to control muscles.  In Parkinson's disease the substantia nigra is damaged so the body lacks dopamine, which blocks messages from the brain to the muscles.
Symptoms
The symptoms of Parkinson's disease come from this blockage of messages from the brain to the muscles:
• Slowness of movement – a shuffling walk, difficulty in starting, stopping and turning easily
• Stiffness of muscles – for example, the arms do not swing as they ordinarily do during walking
• Shaking (tremor), primarily while at rest.
A person with Parkinson's disease may have:
• Reduced facial expressions such as smiling or frowning
• Reduced blinking
• Difficulty with fine movements such as fastening buttons or tying shoes
• Difficulty writing
• Difficulty with balance, causing falls
• Slowed speech
• Swallowing problems, causing drooling
• Tiredness, aches and pains
• Constipation
• Bladder problems and incontinence
• Hallucinations
• Abnormal sweating
• Sexual difficulties
• Loss or distortion of sense of smell
• Sleeping problems
• Weight loss
• Depression
• Anxiety
• Compulsive behaviors
Current Treatment
Since the problems are caused by lack of dopamine, the treatment is to raise dopamine levels in nerves.  At first the drugs that raise dopamine are very effective, but over time, all of the drugs that are currently available lose their effectiveness and the doctor must prescribe ever-increasing doses and combinations of drugs.
There is evidence that some of the drugs used to treat Parkinson's disease (pergolide and cabergoline) are associated with a higher risk of heart valve damage and lesser evidence that these drugs are associated with increased risk for heart failure in Parkinson's patients (CNS Drugs.  Dec, 2015;29(12):985-98).
Jean Shepard
November 21, 1933 – September 29, 2016