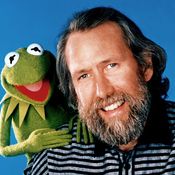 Fifty years ago, Jim Henson created the Muppets, the world’s most famous puppets, for the children’s educational television show, Sesame Street. He won two Emmy Awards for his work, and sold his company to Walt Disney for $150 million. The beloved show has aired more than 4500 episodes.

In 1990 Henson died at age 54 from complications from a bacterial streptococcal infection called toxic shock syndrome. After his death, he was inducted into the Hollywood Walk of Fame in 1991 and won the Disney Legends Award in 2011.  This year Sesame Street became the first television show to be recognized by the Kennedy Center Honors.

A Short, Creative Life
James Maury Henson was born in Greenville, Mississippi and grew up in Hyattsville, Maryland. While he was an undergraduate at the University of Maryland, he created his first puppet show, “Sam and Friends,” for WRC-TV in Washington, DC. The puppets on “Sam and Friends” were forerunners of the Muppets and included a prototype of his most famous character, Kermit the Frog.

Jane Nebel, another University of Maryland student, worked with him on “Sam and Friends”. They married in 1959 and had five children. They worked together until 1963 when she quit to become a full-time mother.

He developed new techniques for a wide variety of facial expressions and used rods instead of strings to move the arms. In 1969, at age 33, he was invited to work on Sesame Street  on public television and the children of the world met his puppets including Oscar the Grouch, Bert and Ernie, the Cookie Monster and Big Bird.

In 1986, after 29 years of marriage, Jim and Jane Henson separated but never divorced. His wife said that they separated because he worked all the time. His children helped with the Muppets because that was often the only way they could see their father.

Fatal Infection
On May 4, 1990, Henson made his last appearance with Kermit on The Arsenio Hall Show. He told people he was tired and had a sore throat. On May 13, he returned to New York and cancelled his work schedule because he was too sick to work. On May 15, at 2 AM, Henson became very short of breath and coughed up blood. He told Jane that he felt like he was dying. She said that he did not go to the hospital because he did not want to bother people. He changed his mind and was admitted to New York Hospital at 4 AM. Soon after admission, he stopped breathing and was placed on a ventilator.

On May 16 he died from toxic shock syndrome caused by infection with Streptococcus pyogenes, a germ that commonly causes strep throat, scarlet fever and rheumatic fever. Henson was infected with Streptococcus pyogenes bacteria for several days and the germ spread rapidly through his body, causing abscesses in his lungs. Then the bacteria released toxins that destroyed his kidneys, liver and heart, sending his blood pressure to zero (“shock”) and killing him.

Massive doses of antibiotics had been pumped into his veins, but he died because while the antibiotics kill the bacteria, they do nothing to clear the toxins. A person must receive antibiotics before the bacteria produce massive amounts of toxins that damage every organ in the body.

Who May Suffer from Toxic Shock Syndrome?
Why did Henson die, when most people infected with strep bacteria suffer only a sore throat? Researchers have shown that it depends on your genes. People born with certain types of HLA (human leukocyte antigen) genes are at high risk for toxic shock syndrome when they are infected with certain types of strep bacteria, while a different combination of HLA genes protects a person from ever developing toxic shock syndrome (Infect Immun, Jun 2000;68(6):3523–3534). HLA genes tell your immune cells which cells are invading germs and should be killed, and which cells are your own and should not be attacked by your immune system.

Beta strep can produce special toxins called superantigens that cause the immune systems of susceptible people to produce large amounts of chemicals called cytokines to destroy the invading bacteria. In susceptible people, these same cytokines can also destroy every cell in the body, killing the heart, liver and kidneys. These people have HLA proteins that bind to superantigens and, at the same time, bind to their immune T cells.

Toxic Shock and Tampons
Another germ called Staphylococcus aureus can cause toxic shock syndrome. These bacteria often live in the oxygen-sparse conditions of the vagina and do not cause any disease. When a tampon is inserted into the vagina, the air trapped in the tampon may allow the bacteria to produce large amounts of toxins in genetically susceptible women. This is very rare (1000 of the estimated 50 million women in the US who use tampons) but at this time there are no tests to determine who may be susceptible.

Avoiding Toxic Shock Syndrome
If you feel very sick and have chills, fever and muscle weakness that does not go away for several days, the odds are strong that you have an infection. Check with a doctor who will examine you and run certain tests to find the cause of the infection. At that point, a course of the correct antibiotic will most likely end the problem. Toxic shock syndrome is  characterized by a skin rash or skin peeling and low blood pressure, and it often follows a local infection in your bones or lungs (Ann Intensive Care, Sep 17, 2018;8:88).  Severe infections should never be ignored because we still do not have any way to cure a susceptible person who has had large amounts of toxins released from bacteria. Genetic testing is not available at this time, so there is no way to tell who may be susceptible to toxic shock syndrome.