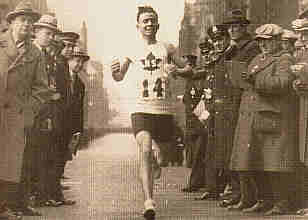 “Unknown Kid Wins the Greatest of All Marathons” — That was the Boston Post headline in 1926. The most unbelievable upset ever in a major marathon was pulled off by Johnny Miles, a 20 year-old who
• had never entered a marathon,
• never ran in a major race,
• had run the marathon distance of 26 miles only once in his life.
After his amazing win, he was quoted as saying, “Everybody told me I was crazy to enter The Boston.”

Johnny Miles was born in England, and came to Sydney Mines on Cape Breton Island, Nova Scotia when he was one year old. At age 11, he started out working in the coal mines to help support his mother and three other children while his father served in World War I. Like me, he worked as a grocery delivery boy. He often ran behind his wagon pulled by horses. He was a delivery boy at the time of his spectacular upset of the world’s greatest runners.

He never ran any race until four years before that incredible race. In 1922 at age 17, he learned about a three-mile race with prizes such as fishing rods, reels, jackknives, and silver cups for the first 12. He came in 13th. His father then decided to coach him.

Interval Training
His father was a very intelligent man, even though he had to work as a laborer. He bought a book written by Alf Shrubb, a former holder of 28 world records, from 2000 yards to 11 miles and the one-hour run. Johnny’s father was smarter than I was because he followed Shrubb’s recommendations on interval training, “One slow lap, another at medium effort and a third at full speed”, continuing the cycle for several repetitions. He was doing intelligent interval training in 1922. I spent my early running career just running long distances. When I was in college I still hadn’t gotten the message about slow junk miles.

The biggest race in Nova Scotia was the Halifax Herald Modified Marathon, a ten-mile race each Thanksgiving. In 1925, the elder Miles told his son, “If you can win this race, I’ll pay your way to Boston for the marathon in April.” He won and set the course record in the very fast time for that period of 53 minutes and 48.3 seconds. To prepare for the marathon, Johnny went from thirty miles a week to more than a hundred miles, running twice a day over the snow-covered, eight-mile section of railroad track near his home, five to seven miles before work and up to fifteen miles afterward.

Each Saturday afternoon he ran twenty miles. That winter he attempted his first 26 mile run, on snow-covered street car tracks. He ran an incredible 2 hours and 40 minutes by himself while taking no fluids or food.

On the day of the 1926 Boston Marathon, the newspapers described the race as a competition between Clarence DeMar of Boston, then the four-time winner of the Boston Marathon and world record holder at 2:29:40.2, and Albin Stenroos from Finland, the defending Olympic Champion. Miles carried a newspaper photo of Stenroos in his wallet for the two years preceding his incredible Boston Marathon win.

Johnny’s Father Made Some Mistakes
A couple of days before the race, Miles’s father had Johnny walk the course, which left him with sore muscles. The night before the marathon the father cooked his son a steak and told him to try to stay with DeMar or Stenroos, whomever happened to lead.

The Race
One hundred and twelve runners showed up at the starting line. DeMar and Stenroos ran close together for the first five miles of the race with Johnny Miles close behind. Then Stenroos broke away from DeMar, with Johnny Miles not far behind. A couple of miles later, Johnny picked up the pace and DeMar did not follow. Johnny did not catch Stenroos until the last of the famous Newton hills. “When we came to Heartbreak Hill, I looked at Stenroos and his eyes were sunken, his face was kind of pulled in, and I figured this was the time to pass him,” Miles told The Boston Globe in 1996. Johnny passed him. “I was afraid to look behind me again for fear he was coming.”

He continued on to the finish line on Exeter Street in 2:25:40.4, shattering DeMar’s course and world record by four minutes and a fifth of a second. Stenroos held on for second, exactly four minutes behind, and DeMar struggled home third in 2:32:15, amazed at what Miles had done. In his first marathon, and as an unknown runner, he set the world record and the Boston Marathon record, the greatest marathon upset ever.

The Rest of His Running Career
The next year, in the 1927 Boston Marathon, Miles dropped out because his thin shoes blistered and bloodied his feet. In the 1928 Amsterdam Olympics, he finished at the back of the pack. In 1929, he won the Boston marathon again, in 2:33:08. DeMar finished ninth. In the 1932 Olympic Marathon in Los Angeles, he failed to win a medal and retired from running to work for International Harvester.

Gone But Not Forgotten
Johnny Miles died 77 years later at age 97, the day of the Johnny Miles Marathon in New Glasgow, Nova Scotia.