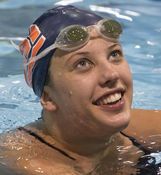 Kathleen Baker made the 2016 United States Olympic Swimming Team by finishing second in the women’s 100-meter backstroke at the United States trials.  To be able to be in the Olympics, she had to have incredible drive and the ability to suffer pain from intense training day after day from early childhood.  But there is far more than just the pain of training for this 19-year-old UC/Berkeley student.  What makes her so extraordinary is that she has Crohn's disease, with bleeding intestinal ulcers that cause intermittent intestinal cramping, diarrhea, vomiting, and nausea.  She has to take medications that suppress her immunity and increase her risk for infections.
What it Takes to be an Olympian
Making the United States Olympic swim team takes a huge amount of constant dedication, suffering, sacrifice and support.  Competitive athletes have to train at the edge of a cliff.   If they don't train near their limits and go to the edge, they can't compete effectively. If they train too much, they fall over the cliff, become injured and can't train at all.   They take two workouts a day in the pool and painful workouts in the gym lifting heavy weights.  One of the twice-a-day pool workouts must be intense enough to damage muscles so that when they heal, they become stronger.   The other daily workout is longer and slower.  There is a fine line between doing enough intense work to make your muscles as strong as possible and doing too much so that you suffer an over-use syndrome in which your muscles are so damaged that they feel sore all the time and you can't swim fast at all.  To be able to train to be a world-class swimmer when you have a serious disease is very unusual and takes a will-to-win that very few people have.
The Road to the Olympics
Kathleen Baker was born and raised in Winston-Salem, North Carolina, and by age 13 she was able to win races against the best swimmers in the country.  Her sister, Rachel, is also a good swimmer on the division III Washington and Lee University swim team.  However, to make an Olympic team, you have to train every day with one of the best coaches and the best swimmers in the country.   SwimMAC, closest top-quality swim team, was 80 miles away in Charlotte NC.  They had sent five of their swimmers to the 2012 London Olympics.  However, most of their top swimmers were much older; they had already been graduated from college while Baker was still in junior high school.
Her parents had to drive 160 miles regularly just to take her to swim practice while she slept in a sleeping bag.  She had to spend so much time away from her regular school that for her last three years of high school, she was home schooled by her father and other teachers.  Eventually, the family had to rent an apartment near Charlotte with one parent staying there with Kimberly during weekdays and the other staying in the family home with her sister in Winston-Salem.

Crohn's Disease
Baker was diagnosed with Crohn's disease at age 13.  In February 2010, she set her first two national age-group records.  Afterwards, she developed fever, very sore muscles and extreme exhaustion.  She was referred to a gastroenterologist who found bleeding ulcers in her intestines and she was diagnosed as having an auto-immune disease called Crohn's disease.
Crohn's disease is thought to be caused by inflammation, an overactive immunity.  It looks like an infection, but no causative organism has yet been found.  Instead of attacking germs, the over-active immunity attacks and damages her own cells, so it is treated with drugs to suppress the overactive immunity, which made her more susceptible to all types of infections.  She developed whooping cough that caused such violent coughing and shortness of breath that she broke several ribs.  She had to take more than 12 pills. a day, but the drugs did not relieve her belly pain, diarrhea and stomach cramps.  She was so sick that she lost more than 10 pounds.  However she loved swimming and fought her doctor's and parents' suggestion that she reduce training to once a day or take off when she was in pain.
In spite of spending a tremendous amount of time in doctor's offices,  this incredible teenager won four medals at the 2013 world junior championships at age 16 and was 2nd in the 200 meter backstroke, 4th in the 100 meter backstroke, 10th in the 200 meter individual medley as a 17-year old at the U.S. National championships.  She chose to go to the University of California/Berkeley after being heavily recruited by colleges with the best swim teams in the country.
It took Less than a Minute to Make the Olympic Team
The best swimmers train in and compete in many different events.  As a freshman in 2015-2016, she placed second in the 200-yard individual medley at the National Collegiate Athletic Association Division I championships in March and therefore should logically have tried to make the Olympic team in that event.   She also is one of the best backstrokers in the country and competed regularly in both the 100 and 200 meter backstroke races.  Because of her disease, she and her coach chose for her to try to make the Olympic team in only one event, the 100-meter backstroke.   However, only the first two finishers in an event make the Olympic team. To make the team, she had to beat that event's 2012 Olympic gold medalist (Missy Franklin) and the former world-record holder (Natalie Coughlin).
She was good enough to make the eight-swimmer final.  As the gun went off, she got a perfect start and led for the first 50 yards.  Near the end, she was passed by Olivia Smoliga to finish second, just ahead of her college teammate, Amy Bilquist.  Defending Olympic champion, Franklin finished seventh and former world-record holder, Coughlin finished eighth.  Her time was 59.29, the fastest she has ever swum in that event.   It took her less than a minute to make the Olympic team.

Lessons from Kathleen Baker's Story
• Making the Olympic team takes far more than just genetic ability.  Training for sports today is so scientific that it is not possible to be a top athlete without proper stress and recover training techniques, workout recoveries, proper nutrition every day, and nutrition and hydration before and during competition.
• You have to have the determination to work harder and more consistently than your competitors and still know when you are doing too much so you can avoid overtraining syndromes and injuries.
• You need a support system that tells you that all this tremendous amount of sacrifice is worthwhile.
• Only against all odds can you become a top athlete when you have a handicapping disease. People who reach the top despite a disease are just better than everyone else and pay a price that most people will never understand or attempt.  Kathleen Baker made the U.S. Olympic swim team in spite of having a crippling disease.  She is the best of the best.
Kathleen Baker
February 28, 1997 –