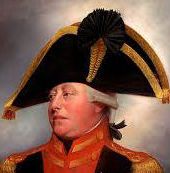 If you think that the Boston Tea Party caused the American Revolution, think again. The war was caused by a hereditary disease called porphyria, an attack of gout and lead in wine.
In 1773, Britain’s East India Company was stuck with a huge amouont of tea that it could not sell in England, so the managing directors of the company convinced the British Parliament to pass the Tea Act of 1773, which gave the company the right to export its merchandise directly to the American colonies without paying taxes. This allowed the East India Company to sell tea cheaper than American merchants could and therefore monopolize the colonial tea trade. The colonists complained, and on December 16, 1773, showed their anger by dumping the British tea into the Boston harbor.
King George III was furious and wanted to punish the colonists severely, but his advisor, William Pitt, calmed him down and warned him to go easy on the colonists or they would rebel against him.  Because of Pitt's wise advice, the British Parliament retaliated only by closing the port of Boston.

The Chestertown Tea Party
Six months later, on May 23, 1774, the colonists in Chestertown, Maryland, had their own Tea Party. William Pitt was so crippled by gout that he had to stay in bed and couldn’t be at the meeting to rein in the king’s wrath. Without Pitt around, King George III flew into a rage and decided to punish the colonists.  As was expected, this set off the American Revolution.
What Made King George III Crazy Enough to Start the American Revolution?
The first clue to King George III’s disease occurred eight years earlier, when his urine turned purple and he had his first attack of severe belly pain and irrational behavior. In the early stages of his disease, he was rational between attacks, but as the disease worsened, he became progressively more insane and blind. He was nursed in isolation and kept in a strait jacket and behind bars in his private apartments at Windsor Castle.

Porphyria
It took more than a hundred years after the death of King George III for doctors to diagnose his hereditary disease, porphyria, which is characterized by purple urine, belly pain, sun sensitivity and crazy behavior.  Porphyria had tormented Mary Queen of Scots, who passed it on to her son, King James I of England.
Porphyria is an inherited disease caused by an abnormal hemoglobin, the chemical that carries oxygen in red blood cells. The abnormal porphyrins:
• deposit in skin, where they cause a terrible itchy rash on exposure to sunlight
• deposit in and damage the liver to cause intermittent bouts of severe belly pain
• pass out in urine to cause a port-wine color
• deposit in and damage nerves to paralyze the arms and legs
• deposit in and damage the brain to cause irrational behavior, and eventually seizures and death.
Other members of the far-flung royal family who suffered from this hereditary disease were Queen Anne of Great Britain, Frederic the Great of Germany, George IV of Great Britain, and George IV’s daughter, Princess Charlotte, who died of the disease at childbirth.
Lead Poisoning and Gout
Lead precipitates attacks both of porphyria and of gout, so both King George’s crazy behavior and William Pitt’s absence at the critical time probably had the same cause. The wine they drank was full of lead from the settling vats used to ferment grapes to make wine at that time.  Lead can cause attacks of both porphyria and gout because it inhibits the enzymes, such as ALA dehydratase, that make normal hemoglobin.  Both alcohol and lead cause soluble uric acid in the blood of people who have gout to precipitate in joints and form crystal stones that cause horrible swelling, redness and pain in joints.
People who have painful joints, particularly in the feet, hands and ears, should not drink alcohol and should be checked for gout. Those people who have gout that does not respond to simple treatments should get blood tests to see if lead poisoning is the cause of their recurrent attacks.
King George III
June 4, 1736 – January 29, 1820