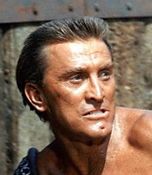 Kirk Douglas, who died at 103 on February 5, 2020, was one of the 20th century’s most famous actors. He starred in more than 90 movies and earned three Academy Award nominations, received a Presidential Medal of Freedom in 1981 from President Jimmy Carter, and an Oscar for Lifetime Achievement in 1996. He was also a prolific producer, director and author. He courageously risked his own career when he defied Hollywood’s infamous blacklist at the height of Cold War paranoia by hiring Dalton Trumbo to write Spartacus and giving him on-screen credit.

In 1964, he and his wife founded the Douglas Foundation, one of the largest and oldest private philanthropic institutions in the entertainment industry. The foundation’s projects have included rebuilding more than 400 school playgrounds in Los Angeles and a facility for care of Alzheimer’s patients at the Motion Picture Home, also in Los Angeles.

His Early Years Had Many Parallels to My Own Experience
Douglas was born Issur Danielovitch in 1916 to Jewish parents who emigrated from farms in what is now Belarus near the Russian border. I feel great empathy for Douglas because his roots and upbringing were so similar to mine. His family moved into the poorest neighborhood in Amsterdam, N.Y., and spoke only Yiddish at home. Like my father, who came at the same time and from the same area in Russia, Douglas’s family came to America in 1908 to save their children’s lives. During the reign of Tsar Nicholas II, males between 12 and 25 years old were likely to be conscripted into the Russian army. Young men from wealthy families could buy their way out, but the poor — which included almost all Jewish families — were dragged into service, and during the Russian-Japanese war they were given old guns or wooden sticks and told to march into the Japanese machine guns to almost certain death. During the last years of the 19th century and the first decades of the 20th, many Jewish families struggled to save enough to send their oldest son to America, where he would try to earn enough to bring his younger brothers over also.

Issur (then called Izzy Demsky) was brought up in severe poverty as the “ragman’s son” in their town. His father bought a horse and a small wagon, and drove up and down the streets selling second hand goods, rags and junk. My father collected nickels and dimes for $500 life insurance policies for Metropolitan Life Insurance Company from immigrants on Fridays after they got paid and before they drank it away or spent it. He told me that he came to America at age four, but many years later, I found his Ellis Island immigration papers and he really came here when he was 11, too old to start in kindergarten, so he never went to school. We lived in Roxbury, one of the poorest sections of Boston. Douglas said he had more than 40 jobs before he became an actor, and paid for his own college education at St. Lawrence University by working as a janitor and gardener. I paid for my education by selling ice cream from a truck for 90 hours a week for nine summers in Quincy, Massachusetts. Douglas told a biographer, “The drive that got me out of my hometown and through college is part of the makeup that I utilize in my work. It’s a constant fight, and it’s tough.” (The Films of Kirk Douglas, Tony Thomas, 1991).

Youthful Good Health, Later Problems
In high school and college Douglas was strong and athletic, and excelled as a wrestler. He changed his name to Kirk Douglas and joined the United States Navy at age 25, but was discharged in 1944 for injuries caused by an accidental dropping of a depth charge. After the war, he went to New York City and worked in radio and theater and eventually in movies. He recovered from his injuries, regained his strength, and became known for his roles, primarily in Westerns, sports and war stories, that required stamina and a great physique. Publicity shots for his films show what excellent shape he was in at this time of his life.

In 1960, at age 44, he produced and played what many consider his most outstanding performance in the movie, Spartacus, which at a cost of $12 million was one of the most expensive films of that time. In this film, he broke the House Un-American Activities Committee blacklist in the Communist witch-hunt of the 40’s and 50’s by using Dalton Trumbo as his screen writer. Years later he told an interviewer, “I’ve made over 85 pictures, but the thing I’m most proud of is breaking the blacklist” (The Jewish Chronicle, September 20, 2012).

Douglas suffered a heart attack in 1989 and was diagnosed with irregular heartbeats that required a pacemaker to be put in his heart. He was treated for depression off and on, and had two knee replacements. In 1991 at age 75, he almost died when he was in a helicopter that collided with a small plane; two people died and two others were injured. This near-death experience led him back to his Jewish roots that he had largely ignored after he left home after high school.

Douglas recovered from his injuries and was still active and vigorous, but at age 80, he suffered a massive stroke that left him unable to speak or walk. With his dedicated wife, his incredible spirit, a near-vegetarian diet and daily exercise with a trainer, he was able to learn how to talk and walk again. His rehabilitation program took him through the next 23 years. After his 100th birthday party, friends described him as being “still in good shape, able to walk with confidence into the [room] for the celebration (The Telegraph, December 10, 2016). He died at age 103 of what the newspapers reported as “natural causes,” which usually means heart failure from physical inactivity.

A Healthful Lifestyle Can Help to Reverse Damage from a Stroke
More than 80 percent of stokes are caused by clots and the rest are caused by bleeding into the brain. Almost all clotting strokes have the same risk factors as heart attacks, while bleeding strokes are often caused by weakened blood vessels and medications that block clotting. Heart attacks and strokes are predominantly caused by lifestyle, not by genetics (Lancet, 2010;376(9735):112-23), and you can live many years after a stroke if you adopt a healthful lifestyle (Circulation, 2017;135(10):e146-e603). Kirk Douglas had smoked up to three packs of cigarettes a day, and had eaten a typical Western diet with lots of meat and sugar-added foods, when he had the debilitating stroke at age 80.

After his stroke at age 80, Douglas became a vegetarian, did not smoke, controlled his weight and had a regular exercise program, and he lived 23 more years. However, you are better off preventing a stroke than treating it, so everyone should follow an anti-inflammatory lifestyle that helps to prevent both heart attacks and strokes. If you have already had a stroke, these lifestyle changes are essential to help you recover and to reduce your risk of having another one.