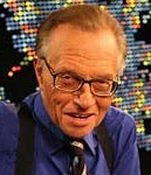 As his doctor and friend, I knew Larry King as the hardest working person I have ever met. He hosted a nightly national Mutual Broadcasting System talk show on 500 radio stations from 1978 to 1994, which were rebroadcast until 2010. He would broadcast live Monday through Friday from midnight to 5:30 AM Eastern Time and would then be out in public each day. He interviewed a guest for the first 90 minutes of the show, took calls with his guest for the next hour and a half, and then took calls on open phones on any subject a caller introduced. His nightly television show, Larry King Live, ran on CNN from 1985 to 2010.

King won two Peabodys, an Emmy award, and 10 Cable ACE Awards, and was inducted into the National Radio Hall of Fame and the Broadcasters’ Hall of Fame. On January 23, 2021, he died from COVID-19, which specifically targets people who have pre-existing heart or lung damage. He was diabetic, suffered multiple heart attacks, a stroke and lung cancer, and had had heart stents and bypass surgical procedures.

Early Years
Larry was born in 1933 during the depression in Brooklyn, New York to Orthodox Jewish parents who emigrated to the United States from Belarus in the 1930s. When he was nine, his heavily-smoking father died of a heart attack and the family had to go on welfare. He was a disinterested student who got a job sweeping floors in a local radio station. When he told the broadcasters that he wanted to be on the air, they suggested that he move to Florida where the local radio business was expanding. WAHR (now WMBM) in Miami Beach hired him to sweep their floors and clean up. When one of the disc jockeys quit without notice on May 1, 1957, Larry was the only one available to replace him. He became a disc jockey from nine to noon for $50 a week. From there he moved on to a job at WIOD where he interviewed anyone who would walk into Pumpernik’s Restaurant in Miami Beach. He was such a good interviewer that he was eventually hired by local radio and TV stations and the rest is history.

How We Met
My first book, The Sportsmedicine Book, was published by Little Brown in 1978, and they scheduled me for several appearances on Larry’s popular radio show. I found him to be the most interested interviewer of all my media appearances. At that time, he smoked up to three packs per day, drank alcohol regularly, did not exercise, and appeared to stay awake day and night. He told me that his father had died of a heart attack, and he had already been married six times. It was obvious to me that he was headed for a heart attack and I told him so. So he became my patient, changed some of his lifestyle habits and reduced some of his heart attack risk factors. However, he continued to smoke and didn’t stop smoking until after he moved from Washington, D.C., to Los Angeles. There he suffered a heart attack at age 54.

Why He Was Such a Good Interviewer
Unlike most other interviewers, Larry King never read the material to be covered on the show beforehand. I was amazed that in my interviews, he would ask such basic questions as,
• “Why should anyone be interested in sports?”
• “Who cares about sports injuries?”
• “What does it matter if a person is injured when he exercises?”
He never really challenged his guests and supported their viewpoints. He estimated that he had conducted more than 60,000 interviews.

Disease Progression
In 1987, at age 54, he suffered a major heart attack and had quintuple-bypass surgery. In 1995, at age 62, he was diagnosed with diabetes but continued to eat bagels and lots of other refined carbohydrates. He developed prostate cancer and in 2017, at age 84, he had a cancer removed from his lungs. In 2019, at age 86, he had another heart attack that was treated with stents placed in the arteries leading to his heart. A few months later he was in a coma for several weeks after suffering a stroke. On January 2, 2021, he was hospitalized for COVID-19 and 21 days later, he died at the age of 87.

Lessons From Larry King’s Unhealthful Habits
Heart attacks and strokes are often caused by lifestyle factors that can be changed.
• Smoking
• Not exercising
• Eating an inflammatory diet with a lot of red meat, processed meats, fried foods, sugar-added foods and other refined carbohydrates
• Not eating lots of vegetables, whole grains, beans, fruits and nuts
• Not getting enough sleep (at least 7 hours per night)
• Drinking a lot of alcohol

You are at increased risk for a heart attack if you have:
• High blood pressure : >120/80 at bedtime,
• High cholesterol: a bad LDL cholesterol >100 mg/dL
• Inflammation: a CRP greater than 10 mg/L
• Diabetes or prediabetes: HBA1c>5.7 or blood sugar >145 mg/dL one hour after meals
• Fatty liver: triglycerides>150 mg/dL, good HDL cholesterol<40 mg/dL
• Abdominal obesity: able to pinch more than 2 inches of fat under the skin next to your belly button
• Small buttocks: storing most of your fat in your belly

Larry King lived for 87 years, but his unhealthful lifestyle choices led to a progression of lifestyle diseases that made him miserable, from diabetes to heart attacks, a stroke, lung and prostate cancers, and eventually to death with COVID-19. I think that everyone should follow the rules of a healthful, anti-inflammatory lifestyle from a young age onward to maintain a high quality of life as long as you can.