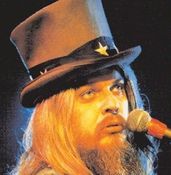 Famous pianist, singer and songwriter Leon Russell died peacefully in his sleep at his home in Nashville, Tennessee on November 13, 2016.  While I consider that dying at age 74 is way too young, the real tragedy is not how long he lived but how much he suffered during the last 10 years of his life.  His faulty lifestyle was far more likely than his genes to have caused the generalized arteriosclerosis that made him miserable and eventually killed him.
In the music world he had everything. He was famous throughout the world and recorded more than 400 songs, including "A Song for You", "Delta Lady," "Heartbreak Hotel," "Tight Rope," "Lady Blue," "Back to the Island" and "Rainbow in Your Eyes."  He played and sang with Bob Dylan, Frank Sinatra, Tina Turner, Willie Nelson, Elton John, The Rolling Stones, George Harrison, Ringo Starr, Doris Day, Ray Charles, Eric Clapton, Barbra Streisand, the Beach Boys, the Tijuana Brass, B.B. King, Glen Campbell and many more.  Yet in the 80's and 90's he was largely forgotten, until Elton John brought him back to prominence in 2006 with the album "The Union. "  He was inducted into the Rock and Roll Hall of Fame and the Songwriters Hall of Fame.

His Life and Career in Music
He was born Claude Russell Bridges in Lawton OK and grew up in Tulsa. At birth he suffered an injury to his upper spine that caused partial paralysis on his right side.  He started piano lessons at age four and worked very hard to compensate for his right arm weakness.  He played baritone horn and trumpet in his high school marching band and started playing in local night clubs at age 14.  When he needed to be over 16 to play in some of the clubs, he borrowed an identification card from a friend named Leon, and the name stuck.   Soon after he finished high school, Jerry Lee Lewis asked him to back him on a two-month tour.  He decided not to go to college, moved to Los Angeles and learned to play the guitar.
In 1967 at age 25, he built a home studio and in 1969 he started his own record label company, Shelter.   When Joe Cocker’s Grease Band broke up, Russell formed a 20-member band called "Mad Dogs & Englishmen," with three drummers and a 10-member choir.  He played a combination of rock, soul, gospel and country music as he hammered on his piano with his huge band and backup chorus.  He looked like a tent-revival preacher with an Oklahoma drawl. His salt-and-pepper hair flowed beneath his top hat to way below his shoulders and his beard reached almost to his belly.  In 1970 his double-live album reached No. 2 on the Billboard charts.  He was playing with Bob Dylan and Erik Clapton and toured with Rolling Stones and his own band.  In 1979, he sang with Willie Nelson in "One for the Road," which sold half a million records.

In the later 1980's the public seemed to tire of his style and his health started to fail. He continued to play and tour for the next twenty years but appeared mostly in small clubs.  He required five hours of surgery to stop his spinal fluid from leaking out of his brain.  Presumably he developed a brain infection that doctors felt came from bacteria entering his spinal fluid through a hole that allowed his spinal fluid to leak out from the tissue covering his brain.  In 2009, 35 years after they first worked together, Elton John called him and they made the album, "The Union" which was a huge success. and revived Russell's career.  He bought a new bus and returned to touring on his own.  In 2011, at age 69, he was inducted into the Rock and Roll Hall of Fame and the Songwriters Hall of Fame.  However, during his newly heavy touring schedule he suffered from chest pain and fatigue.  In 2010, at age 68, he was treated for heart failure and pneumonia. I could not find any public medical records, but he was overweight and needed help getting around, two signs of heart disease.   In 2010, at age 68, he was treated for heart failure and pneumonia, and in July, 2016 at age 74 he suffered a heart attack, had bypass surgery and then in November he died in his sleep, presumably from heart failure.

Inflammation Causes Heart Attacks
Heart attacks cause more than one third of all deaths in North America today.  It is tragic because most heart attacks occur because people fail to follow the known lifestyle factors that help prevent inflammation.
Your body uses inflammation to protect you from invading germs and to heal injuries. When a germ gets into your body, you make cells and proteins to kill that germ. As soon as the germ is gone, your immunity is supposed to dampen down and stop making large amounts of these cells and antibodies. If your immunity does not stop making excessive amounts of cells and proteins to kill germs, these same cells and proteins can attack you to cause "auto-immune" diseases such as rheumatoid arthritis and  it can also increase your risk for heart attacks, cancers, strokes, diabetes and many other diseases.
Your Immunity is Supposed to Help You
You have no germs before you are born, but soon after birth, bacteria start to grow everywhere on your skin surface, in your respiratory tract and in your entire digestive tract. Most of these bacteria are good for you and help in many different ways. They help you to digest and absorb nutrients from the food that you eat, and to eliminate waste products. They colonize the linings of your respiratory tract and intestines to help keep harmful germs from growing there.
However, germs are not supposed to get into your bloodstream. When germs invade your bloodstream through breaks in your skin, intestinal tract or respiratory tract, your immunity recognizes that the proteins on their surface are different from the proteins on your own cells.
Your immunity produces
• antibodies that attach to and try to kill the invading bacteria or virus,
• cytokines that marshal your entire immune system to destroy these germs and
• cells that literally eat the invading germs.
When Your Immunity Stays Active Too Long, It Can Attack Healthy Tissue
While you are fighting a cold or the flu or healing from an injury, you can expect to see signs of your immunity in action, such as a fever, swelling and pain. When the job is done, these symptoms are supposed to go away. Chronic inflammation means that your immunity does not stop working, even though there are no germs that need fighting or injuries that need to be healed. Your immunity stays active and uses the same cells and proteins that kill germs to attack and damage your own cells. Chronic inflammation can lead to heart attacks: The same immune chemicals that dissolve the outer membranes of bacteria can dissolve the inner linings of your arteries to punch holes in them and start the formation of plaques. A heart attack occurs when a plaque breaks off from the inner lining of an artery leading to your heart, travels down an ever-narrowing artery, and prevents blood from reaching parts of your heart muscle. If you do not die during a heart attack, the part of your heart muscle deprived of oxygen dies and is replaced by scar tissue.
What Increases Risk for Chronic Inflammation?
Scientists have not worked out all the mechanisms, but anything that damages cells in your body causes inflammation. That is why many unhealthful lifestyle habits appear to promote chronic inflammation:
• being overweight
• smoking
• drinking too much alcohol
• exposure to excess sunlight
• lack of exercise
• dietary factors: red meat, fried foods and sugar-added drinks and foods increase inflammation, while fruits and vegetables decrease it. See Anti-Inflammatory and Pro-Inflammatory Foods
Other sources of chronic inflammation include:
• exposure to X rays and other radiation,
• exposure to harmful chemicals such as certain insecticides, herbicides and industrial chemicals,
• a chronic infection anywhere in the body.
Lessons from Leon Russell's Tragic Story
Leon Russell is the latest of the many great musicians of the twentieth century who have died too young and often after great misery in their later years.  Working conditions for most of these musicians read like a checklist of the inflammatory habits listed above: smoking and working in second-hand smoke, drinking, drugs, a lousy diet, excess weight and so forth.
Everyone should try to follow an anti-inflammatory lifestyle.  If you have already had a heart attack, you can still prevent a second one and prolong your life by changing the factors that caused your first heart attack.   For example, one year after you stop smoking, your risk for a heart attack is no greater than that of a non-smoker.  Losing weight dampens inflammation. By avoiding red meat and everything with added sugar, you dampen down your overactive immunity.  Early warning signs of failing health should alert you to change the lifestyle factors that caused it.
Leon Russell   (Claude Russell Bridges)
April 2, 1942- July 16, 2016