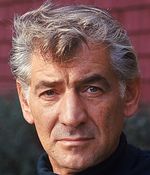 Orchestra conductors often live very long lives, but Leonard Bernstein died at the young age of 72 from a heart attack and severe lung damage, probably brought on by his excessive smoking, drinking and promiscuity. He was one of America’s greatest composers and conductors, a pianist, arranger, educator, author and television personality who wrote some of our best-loved musicals: West Side Story, Candide, and On The Town. He was the first American-born and American-trained conductor to be appointed music director of the New York Philharmonic and to conduct at Milan's La Scala Opera House. He was married to an exceptionally beautiful woman, Felicia Montealegre, who was born in Chile and was an accomplished pianist, singer and actress, and the mother of his three children.

Early Life and Education
His father, Sam Bernstein, was a Ukranian whose goal of becoming a rabbi ended when his family emigrated to the United States to avoid starvation. They settled in the Boston area where his father went from being a fish cleaner, to a janitor in a barbershop, to working for a wigmaker and eventually to owning a beauty supply store.  Leonard got access to a piano at age 10 when his Aunt Clara divorced her husband and needed a place to store her upright piano. His father refused to pay for piano lessons, but Leonard played the piano anyway and was so good without lessons that his father gave him a baby grand piano for his Bar Mitzvah at age 13.

Bernstein went to Boston Latin School and Harvard. I went to the same schools and had many of the same teachers, and when my classmates and I complained about how much we had to study, the teachers would remind us that at our age, Leonard Bernstein was editor of the school newspaper and a famous musician who also studied six hours a night, as we were expected to do. At Harvard he studied with Walter Piston, Edward Burlingame Hill and A. Tillman Merritt, and later with Helen Coates, Heinrich Gebhard, Isabelle Vengerova, Fritz Reiner and Serge Koussevitzky.

Meteoric Musical Career
In 1937, at age 19, he attended a Boston Symphony concert conducted by Dmitri Mitropoulos, played the piano for him on the next day, and received so much praise from the famous conductor that he became determined to be a conductor himself. He then moved to Philadelphia to study with Fritz Reiner. In 1940, at age 22, he was accepted into a conducting class by Serge Koussevitzky who took him under his wing and personally fostered his future.

During World War II most young men were drafted, but Bernstein was not drafted because of the asthma he had developed in infancy. While conducting in later life, his wheezing sometimes could be heard above the orchestra. Being the only young man available because everyone else was in the military, he became assistant conductor of the New York Philharmonic. On the morning of November 14, 1943, Bernstein was asked to substitute for Bruno Walter who had suddenly become ill. The next day, the New York Times praised him in a front-page review and he was invited to conduct the New York Philharmonic eleven more times that season.

From 1945 to 1947, he conducted the New York City Center orchestra and many other major orchestras throughout the United States, Europe, and Israel. By then, the news media was reporting that he was homosexual. In 1951, at age 33, he married the Chilean actress Felicia Montealegre. He told everyone that he loved her and had three children with her, but continued to have sexual relationships  with other men.

Why Most Orchestra Conductors Have Long Lives
Pablo Cassals, Nadia Boulanger, Arturo Toscanini and Leopold Stokowski all conducted major orchestras into their nineties. Walter Damrosch, Arthur Fiedler and Serge Kousevitsky conducted into their eighties. The act of conducting may explain their long lives because it strengthens the heart (Advances in Gerontology, October 2014;4(4):283–289). When you swing your arms, your arm muscles contract and squeeze the veins near them to pump extra blood toward the heart. When your arm muscles relax, they allow blood to fill the veins near them. This alternate contracting and relaxing of the arm muscles pumps extra blood toward the heart. Your heart then must contract against a greater amount of blood inside its chambers, so it beats faster and with more force,  which makes the heart muscle stronger.

Even though he got plenty of exercise as a conductor, Bernstein died at age 72 from heart failure caused by his severe lung damage.  According to two papers presented at the 2014 Scientific Sessions of the American Heart Association, patients with asthma have a 60 percent higher risk of suffering heart attacks and death from heart failure.  It is incredibly sad that such a famous, respected, accomplished and wealthy man could have been so self destructive. Knowing that he had asthma, he should have avoided the unhealthful lifestyle factors that contributed to his early death:

Smoking – He was a lifelong asthmatic and all asthmatics who are exposed to any air pollution will develop severe lung damage. Asthmatics choke up when they are exposed to irritants such as cigarette smoke, smog, hair spray, fresh paint and even burning something on the stove. Asthmatics are sensitive to breathing second-hand smoke and they even get lung damage from third-hand smoke from living in rooms previously inhabited by smokers. Bernstein smothered to death when his heart failed from lack of oxygen, even though he was breathing with an oxygen tank.

Excessive Drinking – He also drank way too much. Recent data show that there is no safe dose of alcohol. Alcohol increases heart attack risk by directly damaging the heart muscle.  See Alcohol and Heart Attacks

Promiscuity – Promiscuous people have increased exposure to sexually-transmitted infections which can directly damage the heart, including syphilis, gonorrhea, chlamydia, mycoplasma and many others. The virus that causes AIDS suppresses a person's immunity to make him susceptible to infections from any germ that enters his body.