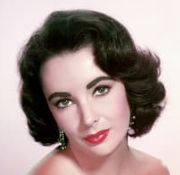 Elizabeth Taylor was a British-American actress who was famous for more than 50 movies, two Oscars, eight marriages, countless lovers and a net worth at death of more than $600 million.

Her eyes are the first thing you notice when you see pictures of her. Instead of the normal single row of eyelashes, she had a thick, dark fringe of extra eyelashes that helped to make her one of the most beautiful women in the world. Unfortunately, extra eyelashes are also part of a terrible disease called lymphedema-distichiasis syndrome that is inherited and is caused by a mutation of the FOXC2 gene.

Guts, Determination and Misery
Her father was an art dealer in London who moved to Beverly Hills, California in 1939 because of the outbreak of World War II. Her mother pushed her beautiful child into movie contracts, and she appeared in Lassie Come Home at age 10. Two years later she auditioned for the lead role in National Velvet but was told she was too short. She eventually got the part after spending several months exercising, overeating and wearing spike-heeled shoes to make her look taller. Her performance in that movie led to an endless succession of leading roles and a glamorous celebrity lifestyle.

In spite of her great success, her genetic disease made her miserable all her life. She was born with scoliosis, a curvature of the spine that caused terrible pain and eventually led to addiction to painkillers and alcohol. She had diabetes, seizures and a stroke among her more than 70 diagnosed illnesses. She had more than 100 operations, including having both hips replaced and a brain tumor removed. She died of congestive heart failure. Almost all of her medical problems were caused by her inherited lymphedema-distichiasis syndrome. This rare genetic disease caused:

• Eyelashes growing inward to irritate and damage her eyes. At age 21 she had surgery reportedly to remove a splinter from her eye, but the extra eyelashes were more likely to have necessitated the surgery. She had several operations to remove inward-growing lashes and had multiple surgeries on her eyelids.

• Swollen legs and ankles that were caused by retained lymph fluid and not by obesity. She spent her entire life dieting and had numerous wasted surgeries on her legs for the swelling and varicose veins, which always returned.

• A deformed spine (scoliosis) and cysts on the spine that caused constant back pain, treated with six back operations.

• Heart abnormalities. In 2004, she was diagnosed with congestive heart failure, which is a progressive weakening of the heart muscle until it becomes so weak that it cannot pump adequate amounts of blood through the body. She had a leaky valve repaired in 2009. In February 2011, she was admitted to Cedars-Sinai Medical Center in Los Angeles for treatment of heart failure caused by her inherited disease, and she died there at age 79 on March 23, 2011.

Destructive Lifestyle Choices
Her incredibly unhealthful lifestyle worsened the health problems that she had from her genetic disease.

Smoking: She was a heavy smoker until her fifties, which caused or worsened multiple bouts of pneumonia. She almost died of pneumonia twice: in 1961 she required a hole to be made into her esophagus to save her life, and in 1990 pneumonia kept her in the hospital for three months. In 1992 she canceled several appearances for another bout of pneumonia. In 1975, she incorrectly thought that she had lung cancer after an X-ray showed spots on her lungs.

Yo-Yo Dieting: She gained and lost significant amounts of weight all her life. In 1980, she went from 180 pounds to 119 pounds. Yo-yo dieting probably contributed to her diabetes because it makes you fatter every time you lose and gain weight. When you lose weight, you lose fat and muscle so over time, it decreases the amount of muscle tissue in the body.  When you regain the lost weight, you gain only fat. Her diabetes also caused her to require surgery for a ruptured ovarian cyst. Diabetes causes a disease called polycystic ovarian syndrome in which the ovaries do not release eggs every month, and instead form cysts on the ovaries.

Addiction to Painkillers and Alcohol: In 1983 she reported that she had been addicted to sleeping pills and painkillers for 35 years. She was treated for alcoholism and prescription drug addiction at the Betty Ford Center from 1983 to 1984 and again from 1988 to 1989. Alcohol is a potent carcinogen.

Osteoarthritis from Lack of Exercise and Excess Weight: She had her left hip joint replaced in 1994 and the right one a year later.

Osteoporosis Made Worse by Lack of Exercise: She had severe osteoporosis that caused her to break her back five times. In 2004, she had surgery on her spine to stabilize seven compression fractures in her spine.

Excess Exposure to Sunlight: She had several surgeries to remove skin cancers and in 2002, she had radiation treatment for a basal cell carcinoma on her face.

Her Eight Marriages
• Conrad "Nicky" Hilton (May 6, 1950 – January 29, 1951). At age 18, she married Nicky Hilton, probably to get away from her overbearing mother. His gambling, drinking and abusive behavior led to a miscarriage and a divorce after only nine months of marriage. He died at age 42.

• Eddie Fisher (May 12, 1959 – March 6, 1964): He was the best man at her wedding to Mike Todd and also his best friend. He helped her get through the horror of Mike Todd's sudden death. They started their affair while Fisher was still married to Debbie Reynolds.  He lived to the ripe old age of 82.

• Richard Burton (March 15, 1964 – June 26, 1974 and October 10, 1975 – July 29, 1976), In Cleopatra, she played the title role and Burton portrayed Mark Antony, her Roman lover. They held their first screen kiss so long that the director called out sarcastically, "I’m sorry to interrupt you two, but it’s time for lunch." At the time, Taylor was married to Eddie Fisher and Burton to Sybil Burton. He bought her one of the world’s largest diamonds for more than two million dollars, as well as other jewels, furs and a luxury yacht, but he drank way too much and made her miserable by calling her "Tubby" as her weight yo-yoed. They divorced in 1974, remarried in 1975 and re-divorced in 1976. His excess drinking was most likely the cause of a stroke that killed him in 1984, at age 58.

• John Warner (December 4, 1976 – November 7, 1982). He used the marriage to help him become a senator from Virginia. She sold the diamond ring Richard Burton had given her to finance his election campaign. This may have been her most miserable marriage as she suffered terrible depression and gained a lot of weight. She went into treatment at the Betty Ford Center after her divorce.

• Larry Fortensky (October 6, 1991 – October 31, 1996). In 1988, they met while both were patients at the Betty Ford Center. He was an alcoholic construction worker, 21 years her junior. They married at Michael Jackson’s Neverland ranch and Jackson paid a million dollars for the wedding. Fortensky was nice to her but he looked more like her bodyguard than her husband. She divorced him, paid him a million dollars and he returned to his job as a construction worker and died prematurely at age 64.

Other Romances
In her teens, she was engaged to Heisman Trophy winner Glenn Davis and then to the son of William D. Pawley, the United States Ambassador to Brazil. Howard Hughes was reported to have promised Taylor's parents that he would marry her. She also dated Frank Sinatra, Henry Kissinger and Malcolm Forbes, among many others. After her last divorce, she was reported to be considering a ninth marriage to another much younger man.

She Was Even Late for Her Funeral
Taylor was buried at Forest Lawn Memorial Park in Glendale, California. She had requested that her funeral begin 15 minutes after it was scheduled, since she had always been late for everything.