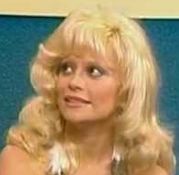 Louisa Moritz was a Cuban-American actress who played mostly dumb blonde roles in several films and TV situation comedies. She was best known for her role as Rose in the 1975 film, One Flew Over the Cuckoo’s Nest, with Jack Nicholson. She appeared on television shows such as Happy Days, M*A*S*H, and Love, American Style, primarily in the 1970’s, and was a regular on The Match Game. She was also a lawyer and a real estate investor.

A year before her death, she fell and injured herself severely during a trip to Washington, DC. She developed an undisclosed form of heart trouble, became incapacitated and spent more than a year bedridden at home. She entered a hospice but then returned to her home, where she died at age 82, on January 4, 2019. Her obituaries reported that she died of “natural causes,” which means that she probably died of congestive heart failure caused by a year of lying in bed and not moving.

Life History
She was born Luisa Cira Castro Netto in Havana, Cuba in 1936 to a family of lawyers, and was a distant relative of Fidel Castro. She worked as an accountant in Cuba, but because of her family’s antagonism toward Castro, she moved to New York at age 23, in 1960. She changed her name to Louisa Moritz, after the St. Moritz Hotel in New York City. She appeared in more than 14 movies and many television shows and commercials. Although she played ditzy blondes in movies and television, she was apparently far from dumb:
• She had a real estate license and became a Los Angeles-area real estate agent.
• She invested in real estate and owned a hotel in Beverly Hills that she named the Beverly Hills St. Moritz.
• She went to the University of West Los Angeles Law School and made the dean’s list, passed the bar and practiced law.
• She played the guitar and wrote and sang a song about host Jay Leno on “The Tonight Show,”
• She produced self-defense programs for TV.
• She was smart enough to get out of two marriages, each in a very short time.

The Bill Cosby Lawsuit
In November 2014, she was among the first seven of the more than 60 women who accused Bill Cosby of sexual assault. She claimed that he forced her to perform oral sex when she was 35 and both were on the Tonight Show in 1971. She was infuriated when Mr. Cosby called her a liar, and sued him for defamation. Her lawyer states that in spite of her death, her claim against Mr. Cosby will continue in a Federal court in Massachusetts. Cosby was convicted of three counts of sexual assault in Pennsylvania and was sentenced to 3-10 years in prison.

The Meaning of “Death from Natural Causes”
Whenever you read that a person died from “natural causes”, it usually means that a person died from heart failure in which their heart became too weak to pump enough oxygen to the brain so they stopped breathing and died. Like any other muscle, your heart requires constant movement to maintain its strength. Inactivity such as lying in bed for prolonged periods weakens your heart. When you contract your skeletal muscles, they squeeze the blood vessels near them to push extra blood back towards your heart. When you relax these same muscles, the blood vessels open to fill up with blood. Alternately contracting and relaxing skeletal muscles sends extra blood to the heart to force it to contract with more force and at a faster rate. It is the increased force of the heart’s contractions that makes the heart muscle stronger. On the other hand, if you lie in bed for a long time, the heart muscle beats with progressively less force so it becomes weaker and weaker, to the point where it may not be strong enough to pump extra blood to your body when you need it.

Signs of Heart Failure
The early signs of heart failure can be very subtle:
• muscle weakness
• chronic tiredness
• difficulty concentrating
• decreased alertness
• feeling too tired for exercise or other activity
• swelling of your feet or fingers
• resting heart rate over 75
• shortness of breath when you pick up the pace
• a slight cough or wheeze
• frequent and night-time urination
• swelling in your belly
• weight gain from fluid retention
• loss of appetite and nausea

As your heart weakens further, you suffer from:
• progressive shortness of breath
• chronic coughing eventually with pink, foamy mucus
• chest pain on moving or exercise
• resting heart rate over 85
• irregular heartbeats
• constant swelling of your feet or fingers

Prevention and Treatments of Heart Failure
Lifestyle changes that help to prevent or treat heart failure include everything to reduce inflammation: a medically supervised exercise program, weight reduction if overweight, avoidance of alcohol and tobacco, an anti-inflammatory diet and treatment of any chronic infections. Your doctor is also likely to prescribe medications depending on your specific symptoms and risk factors.
Reduce Inflammation and Clotting to Prevent Heart Attacks