Our very close friend Pat Connolly, as a 16-year-old high school student, fell down while running at close to world-record pace in the finals of the 1960 Rome Olympics 800-meter race and failed to finish (see the film below).  Distraught and crying, she walked toward the tunnel to leave the track. A tall black man jumped out of the stands and put his arm around her shoulder to comfort her, told her that she should be proud and that she had a brilliant future.
It wasn't until much later that she found out that the man was Mal Whitfield,  twice Olympic champion at 800 meters and one of America's greatest track and field athletes ever.  Whitfield set six world records, won eight United States national titles, was elected to the National Track and Field Hall of Fame in 1974 and the United States Olympic Hall of Fame in 1988.
Early Decision to Run
Whitfield was born in 1924 in Bay City, Texas, but his family soon moved to the Watts district of Los Angeles. His father died when he was four and his mother died when he was 12.  His sister Betty Clark took care of him after she got a court order to prevent him from being sent to an orphanage.  At age eight, he snuck into the Los Angeles Memorial Coliseum during the 1932 Summer Olympics and saw sprinter Eddie Tolan beat another black sprinter, Ralph Metcalfe, in the 100 meter race.  Four years later he saw Jesse Owens race in a Los Angeles track meet, shortly before winning four gold medals at the 1936 Olympic Games.  Many years later he told a Sports Illustrated interviewer, "From that moment on, I knew I wanted to run in the Olympic Games."

The U.S. Air Force and the Olympics
In 1943, after being graduated from Jefferson High School in south Los Angeles, he joined U.S. Army Air Force and flew missions during World War II with the famous all-black unit, the Tuskegee Airmen.  When the war ended, he was encouraged by Jesse Owens to enroll at his alma mater, Ohio State University.  The problem was that he had no money, so he also remained in the Air Force as a staff sergeant and was stationed near the Ohio State campus.  Working full time,  going to school and training at the same time was tough; he remembered waking up at 5AM and going to bed at 12:30AM every day.  Under the very able coaching of Larry Snyder, he won the NCAA title in the 1948 800 meters and qualified for the Olympic team.  At the 1948 Olympics in London, he won the 800 meter race, was a member of the winning U.S. 4 × 400 meter relay team, and finished third in the 400 meter race.  His team mates nicknamed him "Marvelous Mal."
Four years later, at the 1952 Summer Olympics in Helsinki, he again won gold in the 800 meters, tying his Olympic record of 1:49.2 set four years earlier. In both Olympic 800 meter wins, he beat Jamaican  Arthur Wint, who was 5 inches taller than him at 6-foot-5, and like him, flew combat missions in WW II (but for the British Royal Air Force).  "I knew I was going to win," Whitfield, wrote on Wint’s website. "He was a chain smoker, and I was living this gorgeous, clean life: no whiskey, no smoking."
Whitfield was the first active-duty member of the U.S. military to win Olympic medals in track and field. In six Olympic races, he won five medals, broke one Olympic record and tied another.
In addition to his combat duty in World War II, he was a member of an integrated Fighter Squadron during the Korean War and flew 27 combat missions as a tail gunner.  While still serving in the Air Force, he failed to make the 1956 Olympic team.  He had to train by running between bombing missions, on Korean runways at night with a .45-caliber automatic strapped to his side.
Track Immortals from Ohio State University
Ohio State is the only American university to produce three Olympic track and field immortals:  Jesse Owens (1936), Whitfield (1948,1952) and Glenn Davis (1956, 1960). Together they produced 10 Olympic gold medals plus silver and bronze medals.

After the Olympics
In 1952, Whitfield was honorably discharged from the service and transferred to California State University in Los Angeles.  In the winter of 1953, he joined fellow gold medalists from the 1952 Olympics, Herb McKenley, George Rhoden and Andy Stanfield on the Grand Street Boys mile-relay- team to run a 3:14.4 world record at Buffalo's 174th Regiment Armory in New York (which had a very slow flat floor).
In 1954 he became the first African-American to receive the coveted Sullivan Award as the nation’s top amateur athlete.  When he went to receive the award, he had to take the servants' freight elevator at the New York Athletic Club building because blacks were not allowed to ride in the main elevator.  Before him, the award was denied to two other black athletes who were certainly deserving of the honor:  four-gold-medal winner Jesse Owens (1936 Olympics) and to Harrison Dillard, who was the only American sprinter to win Olympic gold medals for 100 meter and 110 meter hurdles, as well as two Olympic gold medals in the 4 X 100 meters relay.  Dillard won 82 consecutive races in 1947-48 and was also a winner in the fourth Maccabiah games in 1953 in Israel for Jewish athletes.
In 1955, Whitfield enrolled in Los Angeles State University and completed his BS degree.  That same year, he was appointed Sports Goodwill Ambassador by the Educational Exchange program in the Department of State to tour Europe, the Middle East and Africa.  In 1956 he retired from active competition. 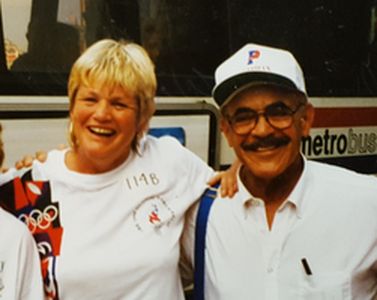 Whitfield attended the 1960 Olympics in Rome as a spectator.  The film above shows our friend Pat Connolly (then 16-year-old Billie Pat Daniels) in the 800 meter race mentioned at the beginning of this article. Pat went on to compete in the pentathalon in the 1964 and 1968 Olympics and won the gold medal in the pentathlon at the 1967 Pan American Games.  She was married to American hammer thrower and Olympian Hal Connolly until his death in 2010. The photo is of Pat and Mal at an Olympic reunion event, many years after their first meeting at the Rome Olympics..
Whitfield was appointed professor and chairman of the Physical Education and Sports Department at the new University of Nigeria in Nsukka, Nigeria in 1960.  That same year he joined the United States Information Agency to conduct clinics for runners in more than 130 countries, living mostly in Kenya, Uganda and Egypt.  He enlisted two of his track and field friends to join him in presenting these clinics: Reggie Pearman, the 1952 Olympic 800-meter teammate from New York University, and Charley Jenkins, the 1956 Olympic 400-meter gold medalist from Villanova University.  In his 47 years in Africa, he coached in 20 countries and arranged sports scholarships for more than 5,000 African athletes to study in the United States. His proteges included:
• Kipchoge Keino, of Kenya, who won the 1500 meter race in Mexico City in 1968
• Mamo Wolde, of Ethiopia, who won the marathon and was second in the 10,000 meter race in Mexico City in 1968,
• John Akii-Bua, of Uganda, who won the 400 meter hurdles in Munich Olympics in 1972
• Miruts Yifter, of Ethiopia, who won the 10,000 meter and 5,000 meter races in the Moscow Olympics in 1980
Declining Health and Death
He continued to exercise vigorously even after he retired from running and was never overweight.  However, although he stayed fit for most of his life, the quality of his life deteriorated in his last several years, affecting his mind and his ability to take care of himself, and confining him to a wheelchair.   I have not seen his medical records so I can only speculate that there may have been other lifestyle factors such as diet that hastened his decline, or he may have acquired infections during his decades of travel in third world countries.
With the help of his children, he was able to travel to the London Olympics in 2012, where he was honored at a reunion that included several other "48ers", athletes who were on the US team for the 1948 London games.  The New York Times celebrated the lives of 14 of the "48ers" in a wonderful photo essay. The reunion was covered by CNN, where one of his daughters, Frederika Whitfield, is a commentator.

He died at age 91 at a VA hospice center in Washington, D.C., after having suffered heart disease, brain cancer, prostate cancer and at least two strokes.  He was buried at  Arlington National Cemetery with full military honors.
Malvin Greston Whitfield
October 11, 1924 – November 19, 2015