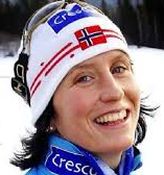 Marit Bjorgen was born in 1980 and is the most successful female cross-country skier of all time, winning world-championship short-sprint races as well as those in all the longer-endurance races.  She has won six Olympic gold medals, 18 FIS World Ski Championship gold medals, 110 individual FIS World-Cup gold medals, and 29 (the most ever) gold medals in Cross-Country World Cup sprints. A review of her training diaries over the years shows that in 12 years, she significantly increased her training load to become one of the most dedicated and hardworking athletes of all time in any sport (Front. Physiol, December 18, 2017).  Becoming a world-class athlete in any endurance sport requires so much time and effort that everything else in your life becomes of secondary importance.
Her Training Program
In her most successful competitive five-year period, she averaged almost three hours per day of training and worked out an average 1.5 times a day. Ninety percent of her training time was slower endurance training, eight percent was strength training with machines, and only 1.4 percent was very fast interval speed training.  Her training included 92 percent slower endurance skiing, cycling and running, 2.3 percent medium pace endurance speed, and 4.8 percent very fast, almost all-out speed work.  Sixty-five percent of her slower endurance training workouts averaged more than 90 minutes each.  As athletes in most sports approach their periods of major competition, they generally decrease the total amount of training to increase their speed of training.  She went from her background period of two hours of speed training per month up to 3.2 hours of speed training per month in her pre-competition periods, and during her competition periods she averaged 4.7 hours per month.
The limiting factor for how fast an endurance athlete can go is the time that it takes for oxygen to enter muscles.   Interval training improves a person's maximal ability to take in and use oxygen (VO2max) more than any other training technique (Med Sci Sports Exerc, 2007;39(4):665-671).   Bjorgen lost a lot of races during the period when she tried to do seven to 11 consecutive days of very fast interval training followed by 21 days of slower interval training for recovery.  Her body could not handle that many consecutive days of skiing very fast.   When she started alternating very fast interval days with slower recovery days, her race times improved.
World-class male cross country skiers average 2.2- 2.6 hours per day of training, 90 percent of which is slower endurance training, with 10 percent training for strength and speed (Int. J. Sports Physiol. Perform, 2016;12:1003–1011).
The six highest-ranking female-cross-country skiers in the world were followed and compared to six national class Norwegian skiers (Med Sci Sports Exerc, June, 2016;48(6):1091-100).  The world-class athletes:
• had a 10 percent higher ability to take in and use oxygen (VO2peak) than those of national class.
• in their summer background training workouts, they trained an average of three hours per day, compared to 2.26 hours per day for the national class skiers
• they performed 26 percent more low-intensity and almost twice as much moderate-intensity endurance and speed training.  This shows that world class athletes train longer and harder than national class ones.  Most endurance athletes do two workouts a day that are so fatiguing that they have to send the rest of the day lying in bed just to recover from the previous workout.
Basic Principles of Endurance Training
A basic training program for any endurance sport typically includes more than 80 percent slower endurance training and a lesser amount of very high intensity interval training that causes muscle burning and shortness of breath.  To make muscles stronger, you have to damage them and you can tell that this is happening when you exercise so intensely that you can't get enough oxygen, so lactic acid accumulates in muscles to make them burn from the acidity.  To increase your ability to take in and use oxygen, you need to exercise to shortness of breath, so athletes in competitive endurance sports use interval training (Sportscience, 2009;13:32-53). Interval training is classified into:
• short intervals that take less than 30 seconds, do not accumulate much lactic acid, and therefore can be repeated many times in a single workout, and
• long intervals lasting more than two minutes, which build up large amounts of lactic acid and can be repeated far fewer times in a single workout.
Successful sprinters in all sports are usually stronger and have larger muscles than their less successful competitors (Sports Med. Feb, 2017;47(2):319-342).  Resistance training with weights can make you stronger and it takes a lot of strength to get up hills on skis.  Many studies show that resistance training can improve skiing efficiency and performance (Eur J Appl Physiol, Dec, 2002;88(3):255-63), as increased strength decreases wasted arm and leg movements during endurance events (Sports Med, 2003;33(7):539-552).   Lifting weights does not reduce the ability to use oxygen during endurance races (Sports Med, 2003;33(7):539-552), but it may increase a person's chances of injuring himself with long endurance workouts.  See my reports on weight training for endurance athletes
Interval training for everyone
How to do interval training
Lactic acid is good for you
Short intervals are best

Marit Bjorgen
March 21, 1980 –
Note: Thanks to reader and cross country skiing racer Gene Goldenfeld for some of the information in this article.