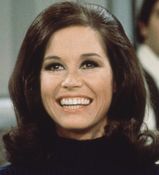 Mary Tyler Moore was one of the most famous female television stars in North America, first as a wife and mother on The Dick Van Dyke Show (1961–1966) and then as a single working woman on The Mary Tyler Moore Show (1970–1977) where  she became a role model admired by women all over the world.   She won six Emmy awards, two Tony awards, an Oscar nomination for her role in the 1980 movie Ordinary People and a Screen Actors Guild lifetime achievement award.