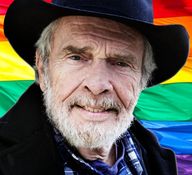 Merle Haggard was a legendary country music singer and guitar player with 38 songs that reached number one on the country charts, and 71 in the top ten. His more than 70 albums and 600 songs, 250 of which he wrote himself, helped him win election into the Songwriters’ Hall of Fame and the Country Music Hall of Fame. However, his use of tobacco, alcohol, cocaine and antidepressants in addition to a lifestyle that lacked exercise and a healthful diet caused him to suffer blocked arteries leading to his heart, lung cancer, and recurrent pneumonia, and he died at age 79 of pneumonia in both lungs.

Poverty, Crime Sprees and a Start in Music
Haggard grew up during the great depression in extreme poverty. In 1934, three years before he was born, his family moved from the poverty-stricken dust bowl of Oklahoma to Bakersfield in the San Joaquin Valley, California. His railway-worker father died from a brain tumor when he was nine, and his very religious mother had to leave him alone much of the time because she had to work to support the family. He had severe asthma as a child that often kept him in bed and out of school.

At age 12, he was given his brother’s used guitar and he learned how to play by listening to old records. As a teenager he broke all the rules so he was kicked out of school and sent to several juvenile detention centers. He was locked up more than a dozen times for robbery, truancy, petty larceny, shoplifting, check forgery and car theft. At age 14, he was arrested for robbery and sent to a correction facility, but he ran away to Modesto, California. That same year, he returned home and was arrested for stealing. At age 15, he was sent to reform school but ran away again. When he was caught, he was sent to the high-security Preston School of Industry for 15 months. Then he was arrested for robbing and beating up a boy and sent back to Preston School.

At 17, he was released from Preston and went to a Lefty Frizzell concert in Bakersfield. Before the show, he snuck backstage and started to sing songs. Frizzell was so impressed that he let Haggard sing a few songs to open his show. Haggard decided that he wanted to be a singer and sang on occasion in local clubs, but had to support himself by working in the oil fields.

First Marriage, Prison and a Music Career
In 1956, he married Leona Hobbs and having no money, they lived with his family in a converted railway boxcar. He went to jail many times, for robbery, burglary, assault, stealing cars and passing bad checks. He claimed that he escaped from jail 17 times. He was arrested for trying to rob a restaurant but escaped, was re-arrested and sentenced to 15 years in San Quentin. The second year he was in prison, he learned that his wife had become pregnant by someone else. He was caught gambling and drinking and was placed in isolation.

On New Year’s Day in 1958, at age 20, he heard a concert by Johnny Cash in San Quentin Prison in which Cash told of his own prison experiences. Haggard said, “Cash had the right attitude, he chewed gum, looked arrogant and flipped the bird to the guards—he did everything the prisoners wanted to do.” After that concert, Merle Haggard started to follow the rules for the first time in his life. He ended up serving only two years of his 15-year sentence. He moved back with his wife and worked digging ditches. He got occasional gigs at local night clubs and eventually was making enough money to quit manual labor. From there, he made steady progress to cutting his own records, working regularly at top night clubs, and appearing on local television.

In 1962, at age 25, he went to Las Vegas where he sang a few songs at a night club and was offered a job to play the guitar in a local band. He recorded his first hit song and was on his way. Over the next few years, he had several hits that became the top songs in the country. At age 32, at the height of the Viet Nam war, he released “Okie from Muskogee” that won him the 1970 Country Music Association Awards for A Single Entertainer and Top Male Vocalist. The song was a battle cry against hippies and war protesters and was loved by middle America where people were patriotic, did not smoke marijuana or take LSD, did not burn draft cards or challenge the authority of the government.

Marriages Two through Five
Haggard had four children with his first wife and was in prison when the first two were born. They divorced in 1964. In 1965, at age 28, he married Bonnie Owens, the ex-wife of fellow country singer Buck Owens. She was a very good wife who sang with him in concerts, helped him write hit songs such as “Today I Started Loving You Again”, and helped to care for his four children. After their divorce in 1978, she continued to sing with him in concerts, was the maid of honor for his next marriage, and remained his best friend until her death in 2006.

In 1978, at age 41, he married backup singer Leona Williams. They argued much of the time and divorced in 1983. He smoked too much, drank too much and used a variety of drugs, but still won a Grammy Award for Best Male Country Vocal Performance in 1984. He said that he gave up cocaine during that period, reporting that he bought “$2,000 of cocaine and partied for five months afterward, and then quit for good.”

In 1985 at age 48, he married Debbie Parret, a waitress, and divorced her in 1991. He blamed himself, saying, “I was partyin’ pretty hard. I’d cancelled all my dates, and I was probably smoking pot, smoking Camels and drinking George Dickel.”

In 1993, at age 56, he married his fifth wife, Theresa Ann Lane, and they had two children. They met when her mother persuaded her to go to Haggard’s concert where she met his guitarist, Clint Strong. Haggard took an immediate liking to Theresa and asked Strong to go to the bus and get him his guitar. When Strong returned with the guitar, he couldn’t find them. They were in Haggard’s room and the door was locked. Strong banged on the door, but nobody answered. They stayed together until his death.

Exposure to Smoke, Alcohol and Drugs
Haggard smoked cigarettes from early childhood until age 53. He took Valium for many years to treat depression, and a doctor suggested that he replace Valium with marijuana, which he did for many years. After having part of his lung removed to treat lung cancer, he said that he finally gave up marijuana. However, in 2009 at age 71, he told a reporter for Rolling Stone magazine that he had resumed regular marijuana smoking.

Illness and Death
In 1995, at age 58, he had an angioplasty to open clogged arteries in his heart. In 2008, at age 71, he had a non-small-cell, lemon-sized lung cancer removed along with part of one lung. Less than two months after his surgery, he played two shows in Bakersfield and then continued to tour and record. In 2015 and 2016, he was hospitalized twice for pneumonia. On the morning of his 79th birthday, he died of pneumonia in both lungs at his home in Palo Cedro, California.

Lessons from Merle Haggard
Death from the ravages of lung cancer and pneumonia is a horrible, prolonged suffering where you feel like you are drowning or being smothered. Young people growing up in the 40s and 50s had little awareness of the harm they were doing to their lungs, but today there is no excuse. There is no doubt that any form of smoke in your lungs puts you at risk for lung cancer. This includes second-hand smoke, smoke or fumes in the workplace and air pollution. I even caution people about fireplaces and wood-burning stoves. In addition,
• Smoking or breathing in pollutants can cause emphysema, permanent lung damage (Nature Immunology. October 5, 2015;16:1185–1194).
• Smoking increases risk for heart attacks (J Am Heart Assoc. April, 2014;23;3(2)).
• Smoking increases risk for death from pneumonia (Chest, Oct, 2014;146(4):1029-37).