At 7 feet, 7.5 inches, Neil Fingleton was the tallest man in the United Kingdom.  He played basketball at the University of North Carolina and Holy Cross College and as a pro in the United States, Spain, China, Italy, Greece and England. He later became an actor who played Mag the Mighty in the HBO fantasy series, Game of Thrones and the villain, The Fisher King, in BBC’s Doctor Who.   At the very young age of 36 and in good health, he died suddenly of an apparent heart attack.
His mother and father were both six feet tall.  His sister was 6’3″, his older brother was 6’8″ and his great grandfather was 6’8″.  He was always taller than his classmates. At age 11 he was seven feet tall, at age 16 he was 7’5″, and he stopping growing at 18 when he was 7’7.56″.
Cause of Death
Being very tall is associated with premature death from a heart attack (West J Med, May 2002;176(3): 206–208). Other giants who have died prematurely from heart attacks include:
• Andre the Giant, seven-foot-four wrestler and actor, died at age 46
• Matthew McGrory, seven-foot-six actor who played in “Big Fish,” died at age 32
• Robert Wadlow, the tallest man ever at eight-foot-eleven, died at age 22
• Zeng Jinlian, the tallest woman ever at eight-foot-two, died at age 17
• U.S. basketball giant legends Daryl Dawkins died of a heart attack at age 58 and Moses Malone died of a heart attack at 60
• Igor Vovkvinskiy, the tallest man in U.S. according to the Guinness Book of World Records at 7′ 8″ died of a heart attack at age 38 on Aug 23, 2021
Most people that tall have pituitary tumors in their brains that produce way too much growth hormone, which causes a condition called acromegaly that enlarges their bones.  Typically people with acromegaly have huge bones and the characteristic facial features that Andre the Giant had — a huge skull, wide nose, thick cheek bones and large chin.
The excess growth hormone in a giant with acromegaly makes the heart grow too large for its normal supply nerves.   This causes them to be at high risk for irregular heartbeats that can cause their hearts to stop pumping blood through their bodies.  Competitive weight lifters who take growth hormone to make their muscles larger and stronger can die of irregular heartbeats many years after they stop taking that hormone because of this disparity between their huge hearts and the inadequate amount of nerves that supply them. 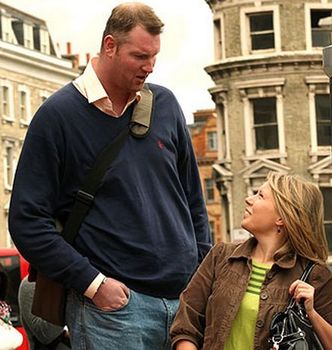 Probably Diabetes
Neil Fingleton did not have the facial features typical of acromegaly.  Even if he did not have acromegaly, he had to have had large amounts of growth hormone to have grown that tall. Growth hormone prevents cells from responding to insulin to cause very high blood levels of insulin and blood sugar that make a person diabetic (J Endocrinol, Sept, 1988;118(3):353-64).  The cause of his heart attack is not known, but if you look at pictures of him in later life, you will see that he had developed a large abdomen which is characteristic of diabetes.   A high school classmate commented that, “He could sit down and easily eat eight to 10 chicken breasts.”  Most cases of diabetes that develop in later life are linked to excess belly fat, which indicates that fat is stored in the liver.
Everybody’s blood sugar rises after they eat, and to prevent blood sugar levels from rising too high, the pancreas releases insulin that drives sugar from the bloodstream into the liver.  However, if the liver is full of fat, it cannot accept the sugar from the bloodstream and blood sugar can rise to very high levels (Journal of Clinical Investigation, September 26, 2016) to make a person diabetic.  People who have big bellies and small buttocks often become diabetic because they store fat primarily in their liver (Diabetes Care, Nov 2017).  High blood sugar levels cause inflammation that starts plaques forming in arteries and these plaques can break off to cause a heart attack (Eur Heart J. Mar 2013;34(10):719-28).  That is why diabetics are at such high risk for heart attacks as well as cancers, osteoporosis, strokes, dementia and so forth.   Diabetes is the most common cause of heart attacks in North America today.
My Recommendations
You can tell you have too much fat in your liver by getting a simple and safe sonogram of your liver (Nutrition, Metabolism & Cardiovascular Diseases, 12/30/2015).  Almost 50 percent of adult North Americans eventually become diabetic and more than 30 percent never know it.  Many diabetics have normal fasting blood sugars below 100, but  they have a high rise in blood sugar after meals that causes most of the cell damage.  Many people with normal fasting blood sugars do not know that their blood sugar rises too high after they eat.  If your blood sugar is greater than 140 mg/dL one hour after a meal, your blood sugar is too high and you are diabetic (Diabetes Care, 2001;24 (8):1448-1453). You can often be cured by losing excess weight and adopting an anti-inflammatory lifestyle (Lancet, Dec 5, 2017).
• Eat a plant-based diet with plenty of vegetables, fruits, whole grains, beans, nuts and other seeds
• Avoid foods with added sugar, sugared drinks including fruit juices, red meat, processed meats and fried foods
• Check with your doctor about an exercise program
• Keep hydroxy vitamin D levels above 30 ng/mL
• Avoid smoke and alcohol
• Lose excess weight
Treat Diabetes with Diet and Exercise
Neil Fingleton
December 18, 1980 – February 25, 2017

Hemingway’s Suicide Caused by his Doctors