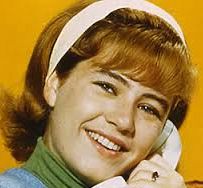 This is the story of an abused young girl who became a famous TV, movie and Broadway actress, an accomplished singer, a television producer and a social activist for mental health.  She was a great female role model as the mother of three children, who worked so hard that she became president of the Screen Actors Guild.  She even played the first woman President of the United States in the 1985 TV series “Hail to the Chief.”  At age 12 she played deaf, blind and mute Helen Keller on Broadway and at age 16,  she won an Oscar for the same role in the film "The Miracle Worker." She also won three Emmys, including one for playing Keller's tutor Annie Sullivan in a TV movie.
Early Experiences Determine Life-long Behavior
Anna Marie Duke was born in 1946 to a father who was an alcoholic cab driver and a mother who was often violent and suffered from manic depression.  When she was six, her mother drove her father from the family home and when she was eight, she was sent to live with her brother's theatrical agents, John and Ethel Ross.  The Rosses changed her name to Patty and became her guardians.  They knew that producers would need a child to play the young Helen Keller in an upcoming Broadway musical, so they had Patty walk around for a year with a blindfold to prepare to audition for the part.  She won the role because she was better prepared than anyone else who auditioned.
In her autobiography, Duke describes how the Rosses drank heavily and took antidepressant prescription drugs and invited their young protégée to do the same.  They gave her uppers in the morning to help her act during the day and they gave her downers at night so she could rest for the next hard day.  They even involved the young actress in their sexual relations.  They were so controlling that they wouldn't let her shut the bathroom door for more than a few minutes at a time. They billed her as two years younger than her actual age so she got acting parts that she felt were insulting.  "I hated being less intelligent than I was. I hated pretending I was younger than I was, I hated not being consulted about anything, having no choice in how I looked or what I wore, I hated being trapped."
At age 15 she won a Golden Globe Award as the Most Promising Newcomer of 1962 for her role as Helen Keller in "The Miracle Worker", and she was nominated for an Academy Award as Best Supporting Actress.  The Rosses told her that she could not invite her mother or any of her family to the ceremony.  At age 16, she starred in the Emmy-nominated "Patty Duke Show" which ran for three seasons, and at age 19, her "Don't Just Stand There" was one of the top selling songs in the country.  When she was 17, she learned that her father, whom she hadn't seen in years, had died alone in his rooming house holding an autographed picture of his daughter.
Horrible Beginning, Rocky Life
Patty/Anna was a drug and alcohol abuser, suffered from manic depression and attempted suicide several times.  At age 19 she moved out of the Ross's home and went to the bank to cash in her savings bonds.  She learned that more than a million dollars was gone, which she said the Rosses had spent on vacations, drinks and drugs.  She moved into her own apartment and married TV director Harry Falk, who was 13 years her senior.  She went into a deep depression and spent days not being able to get out of bed.  Eventually her husband had her committed to a mental hospital. After leaving the hospital, they decided to end their four-year marriage and she tried to kill herself.  The next day, after having her stomach pumped out at the hospital, she went back to work on a movie.

In 1970 she found that she was pregnant and to "give the child a name", she married Michael Tell, who had sublet her apartment in Los Angeles while she was doing a play in Chicago.  That marriage lasted 13 days and she said it was never consummated. She had actually been in a relationship with actor John Astin, who was 16 years older and was still married with three children.  Most likely to protect Astin's marriage, she claimed that the father of her unborn child was 17-year-old Desi Arnaz Jr.  Duke's relationship with Arnaz was publicly opposed by his mother, actress Lucille Ball.  In 1972, at age 26, Duke married John Astin, who played Gomez in The Addams Family.  Astin adopted the child who was actually his own son, Sean, and fathered their second son, Mackenzie.  John’s three sons from his previous marriage, David, Tom and Alan, moved into their Westwood home and Duke adopted them.  As a family they toured the country while Astin and Duke starred in plays and television shows.
In 1982, she lost her voice and was treated with a cortisone injection which restored her voice, but the incident and its treatment tripped off emotional problems and she argued with everyone, even her children. She was formally diagnosed as having a manic depressive disorder (now known as bi-polar disorder) and was treated with lithium pills.  In 1985, after 12 years of constant bickering, the couple divorced. That same year she was elected to a three-year term as president of the Screen Actors Guild.
In 1985, she starred in a TV movie called "A Time to Triumph", about a woman who enters the army in order to support her three children and ill husband.  At Fort Benning, Georgia, Sgt. Michael Pearce instructed her on army rules and customs and she decided that she was in love with him. He was separated from his wife and had two young daughters.  They married in 1986 and moved to Idaho.

Advocate for People with Mental Illness
In 1987 she wrote her autobiography "Call Me Anna."  The book was made into a movie in 1990, in which she played herself and was co-producer. In 1992, she wrote "A Brilliant Madness: Living With Manic Depression Illness".
Many of the roles she portrayed in movies, plays and television were of mentally-disturbed women.
In spite of her marital conflicts and emotional problems, she continued her hectic work schedule until her mid-fifties when she cut back to occasional TV and stage appearances.  Her emotional problems caused frequent bouts of anger and suicide attempts and dominated every factor in her life.
Death from a Perforated Intestine
On March 29, 2016 at age 69, in a hospital in Coeur D'Alene, Idaho, she died of an overwhelming infection following rupture of her intestine.
I have been unable to obtain her medical records, but I learned that she was hospitalized in 2014 for chronic belly pain, had heart bypass surgery at age 58 in 2004 and had emphysema from years of smoking.  Possible causes of chronic belly pain and a ruptured colon include cancer, Crohn’s disease, diverticulitis and ulcerative colitis. Smoking markedly increases risk for colon cancer.   Any leaking of the contents of the intestines into the abdomen causes horrible infection in the bloodstream. Symptoms include severe abdominal pain, chills, fever, weakness, extreme sleepiness, nausea, vomiting and shortness of breath.  Serious blood-borne infections kill more than 258,000 North Americans every year. Immediate surgery and intravenous infusions of massive amounts of antibiotics can save most patients with ruptured intestines, so do not delay seeking treatment for these symptoms.
Lessons from Patty Duke's Life and Death
• Trauma in childhood almost always lasts forever. That is why we have to have strict laws to protect children from abuse by anger, bullying, beatings or sexual exploitation.
• Some people who are incredibly successful in life have severe emotional problems that eventually destroy them and harm those who are close to them.
• Smoking and even second-hand smoke cause permanent lung damage and various cancers.
• Your intestinal tract, lungs and skin are loaded with germs which rarely harm you , but if they get into your bloodstream, they can make you very sick and even kill you.  Know the symptoms of infections in your bloodstream: severe belly pain, chills, fever, weakness, extreme sleepiness, nausea, vomiting and shortness of breath. Seek immediate medical treatment.