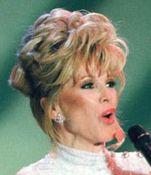 Phyllis McGuire, lead singer of the “McGuire Sisters” who were famous in the 1950s and 1960s, died on December 29, 2020 at age 89 in Las Vegas. In 1968, she left her singing career for a multi-year affair with equally famous Sam Giancana, who was a notorious gangster and leader of the Chicago mob. She also had long-term affairs with Bob Stupak, a Las Vegas casino maverick, and Mike Davis, an oil and gas tycoon.

Early Life and Career
McGuire was born on Valentine’s Day 1931 in Middletown, Ohio and grew up in Miamisburg, a small town near Dayton. Her father was a steelworker and her mother was a minister. By age four, she was singing with her two older sisters, Dorothy and Christine, at their mother’s church. They went on to entertain at military bases and veterans’ hospitals, and by 1952 when she was only 21, the McGuire Sisters were recording for Coral Records and appearing regularly on television shows including Arthur Godfrey’s Talent Scouts and The Ed Sullivan Show. Their top hit records included “Sugartime”, “Sincerely” and “Goodnight Sweetheart”. They performed for five U.S. presidents and Queen Elizabeth II.

At the height of their career in 1968, the McGuire Sisters retired suddenly, presumably because of Phyllis’s long-term affair with Sam Giancana.

Unwanted Notoriety
In 1959, mobster Sam Giancana, who was 23 years older than Phyllis, saw the three sisters performing at the Desert Inn in Las Vegas and asked his workers to check out the then-single Phyllis McGuire. How could an unattractive, uncultured 52-year-old mobster and widower from big-city Chicago get into a relationship with a 28-year-old beautiful lead singer of a successful and wholesome singing group from a small mid-western town? Giancana found out that she owed more than a hundred thousand dollars to the casino for gambling debts, and he told the casino to cancel her debts.

Many years later, she told Barbra Walters, “When I met him I did not know who he was. He was not married and I was an unmarried woman, and according to the way I was brought up there was nothing wrong with that. I didn’t find out until sometime later who he really was, and I was already in love.” At the time he met Phyllis McGuire, Giancana was already infamous. In the early 1960s, Giancana was part of a CIA plot to assassinate Fidel Castro. At that time, Giancana and President Kennedy had the same mistress, Judith Exner. When the news media found out that one of the “squeaky clean” McGuire Sisters was dating a mobster, she tried to leave him. Her parents were very upset with her, the news media lambasted her, and her sister’s husband told her that the group would break up if she didn’t leave him. Each time she left him, she returned. In 1968, the McGuire Sisters singing group stopped performing, in part due to her affair with Giancana. Her sisters stayed at home and had children, while Phyllis kept on singing as a solo act.

The mob didn’t like the relationship either, because it drew too much attention to them. Giancana was sentenced to jail for refusing to testify in front of a grand jury and after his release, he fled to Mexico, but in 1974, after seven years there, he was arrested by Mexican authorities and sent back to the United States. He agreed to be a witness in the prosecution of organized crime in Chicago, but he was murdered by an unknown assailant in his Chicago home in 1975.

Another Improbable Affair
In the 1960s, when she was still spending time with Sam Giancana, she met a Las Vegas gambler, “Tiger Mike” Davis. At that time, she was a friend of Davis’s wife, Helen Bonfils. She started a relationship with Tiger Mike, who, like Giancana, was hot-tempered and often got into disputes with other people. He repeatedly went from periods when he owed everyone money to times when he was so rich that he owned several jet planes at the same time. He was one of the biggest gamblers in Las Vegas. He wore custom-tailored suits and claimed that the CIA asked him to assassinate Muammar Gaddafi. Tiger Mike was born in poverty and grew up on a Sioux reservation in South Dakota. He dropped out of school at age 13 and falsely claimed that he was 16 to get into the army. At age 20, he moved to Denver and was hired as a chauffeur for newspaper heiress Helen Bonfils. In 1959, at age 28, he married the 69-year-old Bonfils and lived in her Manhattan home. In 1960, he used her money to found Tiger Oil to drill oil wells. The company was originally very successful, but went into bankruptcy in the 1980s. His wife’s biography claimed that when Tiger Oil lost money it was his wife’s, and when the company made money, it was his.

In 1960, when he was separated but not divorced from his wife, he met Phyllis McGuire in Las Vegas. He bought her “the biggest necklace, bracelet and ring Harry Winston had.” Davis told the news media, “Giancana sent four hit men to kill me, but I killed two of them.” Tiger Mike then arranged a meeting with Giancana, snuck up on him at a restaurant and put a gun to his head. Sam told Tiger Mike that he could have the girl.

Tiger Mike was rumored to have paid for the massive mansion that McGuire lived in from 1967 up to the end of her life — a 55,000 square foot estate with gold bathroom fixtures, a 19th century chandelier, a swan moat, a 45-foot replica of the Eiffel Tower, bulletproof windows and a basement disco. There was also a guest house, two swimming pools, a lagoon, a tennis court, and a soda fountain. She claimed that she paid for it all with money “from her oil and gas investments.” McGuire lived with Tiger Mike on and off until he died in 2016 at age 85, after a 10-year battle with prostate cancer.

Yet Another Lover with a Strange Background
She also spent several years with her on-and-off-again lover, Bob Stupak, a casino owner. Like her other lovers, he was very generous. After an argument with her, he sent out a press release that he had sent her 1,001 dozen roses. He had dropped out of school in the eighth grade and bought a Harley-Davidson. At age 22, he rode into Las Vegas and ended up building several casinos there. He was also a world-class poker player. In 1995, at age 53, he was nearly killed when his Harley-Davidson motorcycle collided with a car, causing him to remain in a coma for five weeks. In 2009, he died at age 67 from leukemia.

The McGuire Sisters Together Again
The trio reunited in the 1980s and for the next twenty years, they made frequent night club appearances, mostly in Las Vegas, Atlantic City and New York City. In 1994, they were inducted into the National Broadcasting Hall of Fame and in 2001 into the Vocal Group Hall of Fame. In 2004, they were featured in a PBS special called “Magic Moments: The Best of ’50s Pop.”

Phyllis’s older sisters died before her, Dorothy in 2012 and Christine in 2018. A brief local obituary notice for Phyllis said that she had died at home of natural causes on December 29, 2020, with three nephews as her only survivors.

It certainly is nice to have all the money you want and need. However, sometimes, the lure of extra money can lead you to make decisions that can make you miserable. None of Phyllis McGuire’s financially-successfully lovers really made her happy or worry-free.