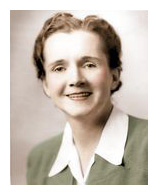 Rachel Carson was an environmental scientist and writer who alerted the world to the health dangers of pesticides and fertilizers. Her best-selling book, Silent Spring, led to formation of a presidential commission that recommended banning DDT, and to creation of the U.S. Environmental Protection Agency. In 1964, she died of breast cancer, an invasive disease that affects one in eight North American women and is the second leading cause of cancer death in women, after lung cancer.

Breast cancer is associated with many of the environmental risk factors that Carson studied, yet today, only seven percent of 85,000 industrial chemicals have been tested for safety. The U.S. government does not have adequate chemical regulation policy, so companies can manufacture and use chemicals without ever establishing their safety in humans. The increased use of chemicals in our daily lives is associated with increased risk for breast cancer and many other cancers.

Early Life and Scientific Career
Rachel Carson was born on a farm in Springdale, Pennsylvania in 1907. She began writing stories at age eight, and had her first published story at age ten. She was at the top of her class in high school and was graduated magna cum laude from the Pennsylvania College for Women (now Chatham College) in 1929. She went to Johns Hopkins to receive her master’s degree in zoology and genetics, and then taught at the University of Maryland for five years and produced a weekly radio broadcast about life in the sea called Romance Under the Waters.

The success of her radio shows helped her to overcome discrimination against women in federal government and she got one of the highest marks ever on the civil service exam. In 1936, she became the second woman to become a full time aquatic biologist at the Bureau of Fisheries. In 1941 her first book, Under the Sea Wind, was published but it did not sell well. In 1951 she wrote The Sea Around Us which was on the New York Times Best Seller List for 86 weeks, and won the 1952 National Book Award for Nonfiction. This book won her two honorary doctorates. She was now making enough money to be able to quit her government job and write full time.

In 1962, she wrote Silent Spring, which led to the establishment of a presidential commission that recommended the eventual banning of DDT and many other pesticides. Her book also led to the creation of the U.S. Environmental Protection Agency. Her obsession about the dangers of pesticides continued for the rest of her short life. She received the Presidential Medal of Freedom after she died.

Personal Life
Carson's father had died in 1935, so she had to care for and support her aging mother. In 1937, her older sister died and she became responsible for her sister's two children as well. In 1957, one of her nieces died at age 31, leaving a five-year-old son, so she adopted and supported him also.

In 1953 (age 46), she moved with her mother to Southport Island, Maine. She met Dorothy Freeman and her husband, who were summer residents there. She and Mrs. Freeman, who was 55, started a relationship of personal contacts with thousands of letters between them. When Carson learned that she was going to die, they destroyed most of the letters. However, some of the letters survived and in 1995, thirty years after her death, they were published in by Mrs. Freeman's granddaughter. Nobody knows the full nature of their relationship.

A Young Death from Breast Cancer
In April 1960, she was diagnosed with breast cancer and had a radical mastectomy as well as intensive chemotherapy and radiation. Her private letters describe the incredible pain that followed. The spread of the cancer from the breast to her bones and liver caused intractable bone pain and weakness. Chemotherapy caused vomiting, nausea, diarrhea and hair loss. It also caused anemia and impaired her immunity so she suffered a lung infection that was so severe that she needed oxygen. The radiation caused skin burns, angina chest pain, and eventually the heart attack that killed her at age 56, on April 14, 1964. Her body was cremated. Half of the ashes were buried in her mother's grave at the Jewish Parklawn Memorial Cemetery in Rockville, Maryland.

She lived only 18 months after the publication of Silent Spring. She did not live to see the results of her efforts:
• Creation of the U.S. Environmental Protection Agency in 1970,
• The first Earth Day in 1970,
• The banning of DDT in 1972.

Risk Factors for Breast Cancer
We do not really know what causes breast cancer. We do know that many things that you do, or are exposed to, are associated with increased risk for breast cancer.

• Exposure to chemicals that act like the female hormone, estrogen: some plastics, certain cosmetics and cosmetic products, pesticides, polychlorinated biphenyls (BPH)
• Using oral contraceptives. A few years after you stop taking birth control pills, the risk declines to normal.
• Injectable birth control progesterone, depot-medroxyprogesterone acetate. Risk decreases after you stop taking it.
• Postmenopausal hormone therapy using estrogen and progesterone together. (Estrogen alone may not increase breast cancer risk).
• Drinking alcohol. At any amount, alcohol appears to increase many different cancer risks. The more you drink, the greater the risk for breast cancer.
• Being overweight. Fat cells make estrogen which increases breast cancer risk. Excess weight raises blood insulin levels which increases cancer risk.
• Gaining weight. Women who are thin as teens and fat as adults are at higher risk for breast cancer than those who were fat all their lives.
• Storing fat primarily in your belly rather than in your hips and thighs. People who store fat primarily in their bellies also store fat primarily in their livers which increases insulin levels to raise breast cancer risk.
• Lack of exercise. In one study, just 1.25 to 2.5 hours per week of brisk walking reduced breast cancer risk 18 percent (Control Clinical Trials, 2002;23:728-756).
• Tobacco smoke, including second-hand and third-hand smoke.
• Not having children. The more children, the lower the risk.
• Having first child after age 30
• Breast-feeding (reduces number of menstrual cycles)