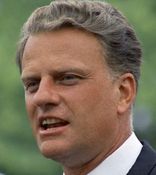 Billy Graham came from relative poverty, milking cows and plowing fields on a family dairy farm near Charlotte, NC, to become a Southern Baptist minister and the best-known North American evangelist of the 20th century. He hosted his huge crusades from 1947 until his retirement in 2005, and reached an even wider audience through television and radio broadcasts.  He counseled twelve U.S. presidents from Harry Truman onward and was seventh on the Gallup List of the Most Admired People of the 20th Century that was published in 1999.
Graham died on February 21, 2018 at the ripe old age of 99 and he certainly had lived a fruitful life.  He had the physical appearance of a movie star, a trim 6’3" with chiseled features, piercing blue eyes and a vigorous handshake.  However, he spent the last two decades of his life suffering from a host of illnesses that largely confined him to a walker or wheelchair and made him miserable.
The March to Fame
At age 16, he attended a tent revival that passed through his town.  "That night I committed myself unreservedly to Jesus Christ,"  he recalled. "I determined to spend the rest of my life in his service."  He went to the Florida Bible Institute in Dunedin, FL, and was ordained a Southern Baptist preacher in Palatka, FL.  At age 22, he went to Wheaton College in Illinois.  At age 30, he planned a revival crusade in Los Angeles and ordered a huge 6,000-seat tent. It could have been a humiliation because, at that time, very few people in California had ever heard of Billy Graham, but William Randolph Hearst ordered his extensive newspaper chain to publicize the event, and the original three-week crusade was packed with admirers for eight weeks.  Graham was featured on the cover of Time Magazine and went on to preach to millions all over the world.  He was an early advocate of integration at this crusades, and conducted a joint revival meeting with Martin Luther King, Jr., in New York City in 1957.
Personal Life and Health
In 1943 Graham married a classmate from Wheaton college, Ruth Bell, and they remained married for 64 years until her death in 2007.  The Grahams had five children, 19 grandchildren and numerous great grandchildren.  I have not been able to find much information on Graham's lifestyle and health habits, but he apparently did not have to worry about the consequences of sexually-transmitted diseases as did some of his scandal-ridden peers such as Jimmy Swaggart or Jim Bakker.  He made it his policy to never be alone with any woman who was not his wife.
There is also evidence that he did not consume alcohol.  When Prohibition ended in 1933, Graham's father forced 14-year-old Graham and his sister to drink beer until they got sick, which made such an impression that they both avoided alcohol and drugs for the rest of their lives.
Beginning Signs of Poor Health
In 1995 Graham's longtime friend, Professor William Martin, told the National Enquirer that Graham suffered from "hernias, ulcers, cysts, polyps, infections, pneumonia, chronic high blood pressure, throbbing headaches and several falls that have broken 18 of his ribs."
Normal Pressure Hydrocephalus:  At age 73, Graham started to lose his coordination, his hands started to shake, and his handwriting became illegible.  He was originally mis-diagnosed as having Parkinson's disease.  Later he was correctly diagnosed as having increased pressure on his brain from excessive spinal fluid and was treated with a shunt to let the spinal fluid drain from his brain.
Osteoporosis: At age 85, he broke his left hip and his pelvis in separate falls and was reported to have broken several ribs in other falls. That means to me that he probably had  osteoporosis, weakening of his bones that put him at high risk for fractures from any fall or trauma.  I have no evidence that he had any of the more common risk factors for osteoporosis, such as low thyroid, parathyroid or adrenal hormones, calcium deficiency, eating disorders, gastrointestinal diseases or surgery, kidney or liver disease, autoimmune diseases, smoking or excessive intake of alcohol. He did have prostate cancer, which is a risk factor for osteoporosis, and I have no evidence that he ever had a regular exercise program. Inactivity weakens bones, so his confinement to a wheelchair in his later years would have increased his risk for fractures.
Prostate Cancer: Graham suffered from prostate cancer in his eighties, but almost all North American men his age will suffer from that condition and like him, the vast majority will not die from it.  Recent research suggests that prostate cancer may be a metabolic disease associated with the same factors that lead to high blood sugar and high blood pressure.
Macular Degeneration: His fading vision and hearing loss were signs of nerve damage. The most common cause of extensive nerve damage in North America today is high blood sugar levels.  I do not know the specific causes of Graham's nerve damage, but prevention measures include exercising, following a healthful anti-inflammatory diet, not smoking, treating high blood pressure or high blood sugar and losing excess weight.
Respiratory Problems:  He was hospitalized at ages 93, 94, and 95 for respiratory problems. He probably had lung disease such as chronic bronchitis that made him unusually susceptible to infections.
Bleeding from his Colon: At age 89, Graham was hospitalized for nearly two weeks after severe bleeding from his colon caused by a malformation of his blood vessels there.
My Recommendations
I often talk about the goal of living to 100 years, and Reverend Billy Graham nearly made it.  However, living a long life with multiple disabilities can just mean that you are miserable for a longer period of  time.  To make the best of those later years, I recommend that you follow an anti-inflammatory lifestyle by trying to:
• move around and exercise every day,
• eat an anti-inflammatory diet,
• avoid being overweight, and
• avoid smoke, alcohol and unnecessary drugs.
Reverend Billy Graham
November 7, 1918 – February 21, 2018