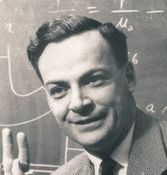 Richard Feynman was probably killed by the first atomic bomb explosion in Trinity, New Mexico in July 1945, even though it took 42 years for him to die from it in 1988.

Feynman was one of the greatest theoretical physicists of all time. He helped to develop the atomic bomb during World War II and solved the mystery of the Space Shuttle Challenger disaster in 1986. He won the 1965 Nobel Prize in physics for his discoveries in quantum electrodynamics. He discovered new ways to use quantum computing and nanotechnology, integral formulation of quantum mechanics, theories of quantum electrodynamics, the physics of the superfluidity of supercooled liquid helium, the parton model in particle physics, and the pictorial representations on the behavior of subatomic particles known as Feynman diagrams. He was the best-attended lecturer at Caltech and his Feynman Lectures on Physics were used in top universities all over the world. Physics World, a British journal, ranked him as one of the ten greatest physicists of all time. He died from multiple cancers, 46 years after he watched the first atomic bomb explosion with no protection from radiation but a truck windshield.

Education and Accomplishments
Feynman was born in Far Rockaway, New York, in May 1918. By age 15, he had taught himself trigonometry, advanced algebra, infinite series, analytic geometry and differential and integral calculus. He won the New York University Math Championship with a score much higher than anyone else in the competition, but he was not accepted at Columbia University because of their Jewish student quota, so he went to the Massachusetts Institute of Technology. At Harvard, President Lowell disguised their Jewish quota when he noticed that almost all Jewish applicants came from large cities, so he set limits on the number of applicants from each large American city. This subterfuge was not abandoned until Harvard President Pusey got rid of it in 1952.

While he was a senior at MIT, Feynman had the highest scores on record on the math/physics graduate admission exams and won the Putnam mathematics competition, arguably the most prestigious award for academic college achievement. (My fellow member of the Harvard track team, Kent Wilson, won the Putnam Prize in 1957 and went on in 1982 to win the Nobel Prize in Physics). The first graduate seminar Feynman presented at Princeton was attended by three of the top physicists in the world: Albert Einstein, Wolfgang Pauli, and John von Neumann. Feynman received a Ph.D. from Princeton in 1942 and was recruited to help build the atomic bomb as part of the Manhattan Project.

A Tragic Love
In high school, he fell in love with Arline Greenbaum, who suffered from skin rashes, fever, and feeling sick but her doctors could not find a cause. The doctors told her family that she probably had a cancer of her immune system even though the tests did not show this. Feynman did some research at the library and told her family to tell the doctors that she had tuberculosis, which was the correct diagnosis. Feynman and Greenbaum continued to see each other through his college and graduate school years, but did not marry because Princeton told him they would withdraw his scholarship if he married. On June 29, 1942, they took the ferry to Staten Island and were married in the city hall with no family or friends around. He kissed Arline on the cheek and then took her to Deborah Hospital, where he visited her on weekends. When he went to work on the atomic bomb in Los Alamos, she was so sick that she couldn’t stay with him and had to be hospitalized a hundred miles away in Albuquerque. He was devoted to her and often drove two hours to visit her in a car borrowed from Klaus Fuchs, who was later found to be a Soviet spy. Arline was so sick with a contagious disease that had no effective treatment at that time that they did not have their first sexual relationship until 1945, two and a half years into their marriage. She died in 1945, which sent Feynman into a deep depression. (Tuberculosis also killed the love of Alan Turing’s life. Turing was arguably the man most responsible for the allies winning World War II by breaking the ENIGMA code the Germans used to communicate with each other).

In 1952, Feynman was married to Mary Louise Bell for a short time. She wrote in her divorce complaint, “He begins working calculus problems in his head as soon as he awakens. He did calculus while driving in his car, while sitting in the living room, and while lying in bed at night.” She also complained that he banged constantly on his African drums, and if she disturbed his calculus or drums, he would throw things at her and break furniture.

As a single man after his divorce, he dated undergraduates at Caltech and show girls and prostitutes in Las Vegas. He considered himself an expert on dating and offered advice in a book, Surely You’re Joking, Mr. Feynman, which became a New York Times bestseller.
In 1960, at age 42, he married 26-year-old Gwyneth Howarth and stayed with her for the rest of his life. She gave birth to a son, Carl, in 1962, and they adopted a daughter, Michelle, in 1968. With his son, Carl, Feynman developed the first massively parallel computer.

The Challenger Disaster
In 1986, he discovered the reason the Challenger space shuttle exploded 73 seconds into its flight, killing the crew of seven astronauts. The rubber O-ring seals in the shuttle’s solid rocket boosters failed because of freezing temperatures outside. He held a press conference in which he compressed a sample of an O-ring in a clamp and then placed it in a glass of iced water. It stayed compressed, showing that the disaster was caused by the primary O-ring being deformed by the unusually cold weather at Cape Canaveral.

Radiation Exposure
In July 1945, Feynman was present at the first atomic bomb explosion in the Trinity bomb test in New Mexico. He claimed that he was the only person who saw the explosion without the very dark welder’s glasses that were given to all the physicists present on that day. He thought that the truck’s windshield would block the ultraviolet radiation from the blast.

Exposure to incredibly high doses of irradiation can cause cancer many years later. In October 1979, Feynman told his son that he had a football-size tumor in his belly. Surgeons removed a six-pound cancer, called myxoid liposarcoma, that had already destroyed his left kidney. Even when the tumor appears to have been removed completely, another tumor may form in a different place, usually spreading to the lungs or liver. The five-year survival rate is less than 50 percent. He was then diagnosed with a second cancer called Waldenström’s macroglobulinemia, a non-Hodgkin lymphoma cancer of his white blood cells, that grows and spreads slowly. He continued to work at Caltech and taught classes until two weeks before his death.

In October 1987, he had surgery for a second abdominal cancer which was followed by kidney failure. ‘In February 1988, he went back to the hospital but was in such great pain from his failed kidneys that he refused further dialysis or surgery. He died on February 19, 1988. His last recorded words were “I’d hate to die twice. It’s so boring.”