Roger Bannister was the first human to run a mile in less than four minutes, even though his training was totally inadequate for world-class competition because:

• he was a full time medical student who trained on a single 30-minute workout per day, compared to today’s runners who train twice a day for as much as three hours
• he averaged 28 miles per week, compared to 80 to 140 miles per week by most runners today
• he raced in track shoes that were heavy and stiff, with spikes that were heavier than the total weight of modern track shoes
• he ran on very slow cinder tracks instead of the super-fast artificial tracks of today.
He quit racing to become a doctor before he could come anywhere near his spectacular genetic potential to be an Olympic champion. He went on to become one of the world’s leading neurologists and treated many hundreds of patients with Parkinson’s disease.  At age 81, he himself was diagnosed with Parkinson’s disease. At age 84 he was unable to walk and had to use a wheelchair, and at age 88, on March 3, 2018 he died from the many complications of the disease.
Road to a World Record
Bannister was born in Harrow, England, into a working-class family and liked to run everywhere instead of walking.  At ages 12, 13, and 14, he won his school’s cross-country run without any formal training.  At the age of 16, he decided to become a runner.  He knew that his parents could not afford tuition at an elite university so he studied very hard and won a scholarship to Oxford University.
When he first showed up at Oxford in 1946, he had never run on a track or worn spiked running shoes.  His early training there was one workout a week and a seven-and-a-half-mile cross-country race.  On this ridiculously meager training schedule, he ran a mile at age 18 in an exceptional 4:24.6. In 1948, he lowered his mile time to 4:17.2.  At age 20, he ran 4:14:2.  He was now using interval training under the watchful eyes of coach Franz Stampfl.  He improved all the time and in 1950 finished a relatively slow 4:13 mile with an impressive last quarter mile in 57.5 seconds. He came in third in the 800 meters (about a half mile) at the European Championships. In 1952, he ran a 4:10.6 mile and was selected for the British Olympic team.
At the Olympics, he finished a disappointing 4th in the 1500 meter race.  Josey Barthel of Luxembourg won that race in 3:45.1 with an incredible sprint at the end and the first 7 runners all broke the previous Olympic record. In that race, Bannister set the British record of 3:46.3 (the same pace as a 4:01.7 mile).
The Sub-4-Minute Mile
After his “failure” at the 1952 Olympics, Bannister set out to be the first man to run a mile in less than four minutes, a feat many people believed to be impossible.  He started a training program similar to that used by Josey Barthel, of running very fast intervals two days a week. (Barthel had come to Harvard and convinced runners there to base their training on short workouts of fast intervals. They would run two quarter mile repeats each in 55 seconds, a half mile in under two minutes, and three quarter mile in 3:10 and then go home.  I used to watch Nick Costes, a previously-mediocre local runner, train with Barthel on these incredibly fast intervals and he made the U.S. Olympic marathon team in 1956).
In 1953, Bannister ran a 4:03:6 mile.  On June 5, 1953, American Wes Santee ran 4:02.4 and that fall, Australian John Landy ran 4:02.0.  Then on May 6, 1954, paced by future Commonwealth Games gold medallist Chris Chataway and future Olympic Games gold medalist Chris Brasher, Bannister became the first person to run a sub-4-minute mile with a time of 3:59.4.  The race was broadcast live over BBC Radio and the commentator was 1924 Olympic 100-meters champion Harold Abrahams, of Chariots of Fire fame.  As Bannister crossed the line, Abrahams yelled “Three . . .” and the rest of his words were drowned out by the cheering crowd.  The record lasted for only 46 days, when Australian John Landy ran a 3:57.9 mile, but Bannister is the name that is remembered because he did it first.
The Mile of the Century
On August 7, 1954, at the British Empire and Commonwealth Games in Vancouver, B.C., the only two men who had run sub-four-minute miles competed head-to-head. Landy led for most of the race, and at the start of third lap he led by 10 yards.  At the last turn on the track, Landy turned his head to look over his left shoulder at Bannister as Bannister scooted by him on the right to win in 3:58.8.  Landy’s time was 3:59.6.  A larger-than-life bronze sculpture of the two men at this moment was created by Vancouver sculptor Jack Harman (note Landry looking to the left, Banister passing on the right). 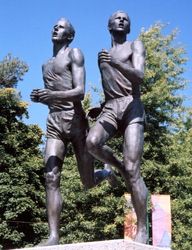 Bannister retired from competition soon after that and published more than 80 papers over more than 40 years of medical research.  He continued to run and would take his four children for morning jogs in London’s Kensington  Gardens, started an orienteering club, and was a regular sailor. At age 46, he had to stop running because of a broken ankle in a car accident.   In 2012, he carried the Olympic flame at the Olympic celebration in the Oxford University track stadium named after him. Today the world record for a mile is 3:43.13 held by Hicham El Guerrouj from Morocco, set in Rome on July 7, 1999.
Parkinson’s Disease
Parkinson’s disease is thought to be caused by a protein, called alpha-synuclein, that destroys the nerves throughout the body, particularly those in the brain that produce dopamine, a chemical that controls movement and posture (Trends in Neuroscience, Jan. 2017;40(1)).  The disease often starts in the gastrointestinal tract, is progressive and has no known cure. A cure may be possible if scientists can develop a drug to destroy alpha-synuclein.  Today, the common medical treatment is to take dopamine and dopamine-stimulating drugs to help control muscle function.
Deep brain stimulation: Surgeons implant into the brain electrodes connected to a generator in the chest that sends electrical pulses to the brain to help patients control their muscles so they shake less and have more purposeful muscle movement.  This procedure has side effects such as clots and strokes, and does not slow progression of symptoms, so it is only offered to people with advanced Parkinson’s disease.
Diet:  A major complication associated with Parkinson’s disease is constipation, so all patients with this disease should restrict refined carbohydrates such as foods made from flour and sugar-added foods.  They should drink lots of fluids and eat a diet loaded with fiber (fruits, vegetables, whole unground grains, beans, seeds and nuts).
Exercise: Studies show that a regular exercise program can help people afflicted with Parkinson’s disease control their muscles (Neurology, July 19, 2011;77(3):288-94). For example, after a half-hour ride on the back of a tandem bicycle, people who were unable to write because their hands shook, were able to write clearly for several hours.  Psychological and physical improvement has been reported after activities such as walking, swimming, gardening, dancing or water aerobics.
Other famous people affected by Parkinson’s disease include Muhammad Ali, Salvador Dalí, Michael J. Fox, Reverend Billy Graham, Jean Shepard, Pope John Paul II, Robin Williams, Vincent Price, Erich Segal, Linda Ronstadt, Maurice White, John Walker and Mao Zedong
Sir Roger Gilbert Bannister
March 23, 1929 – March 3, 2018