The U.S. Office of National Drug Control Policy has reported that even though it is illegal to use recreational cocaine, almost five million North Americans use it each year, leading to more than 550,000 yearly trips to emergency rooms.

From the 1860s through 1922, there were no laws to limit the use of cocaine and it was a common ingredient of patent medicines, including the original Coca-Cola, which was developed by pharmacist John Stith Pemberton.  Two famous doctors of that time used cocaine regularly and experimented with its medicinal uses, and a third doctor described its use by his beloved fictional detective, Sherlock Holmes.
• Sigmund Freud used cocaine regularly and in his first scientific paper, published in 1884, he reported that cocaine could cure addiction to opium, morphine and alcohol and that it cured him of depression and increased his sex drive.
• William Stewart Halsted, the most famous surgeon of his time, spent most of his adult life on cocaine and demonstrated its use for nerve-block anesthesia.
• Sir Arthur Conan Doyle wrote his first Sherlock Holmes novel in 1887, “A Study in Scarlet”, in which his famous detective injects himself with cocaine (The Pharmaceutical Journal.  Dec 23, 2000;265(7128):915-917).
Sigmund Freud (1856 – 1939)
In 1881, as an impoverished recent medical school graduate, Freud started his career by experimenting with cocaine. He thought it was a treatment for morphine addiction and might help patients suffering nervous exhaustion, anemia, asthma, syphilis and typhus.  He even tried it to help addicts stop abusing alcohol and morphine.  He sent some cocaine to his fiancée, Martha Bernays, describing its many benefits.  He desperately wanted to marry her, but her parents were rich and looked down on this young upstart who was presumptuous enough to ask for their daughter’s hand. Freud had high hopes of impressing them with his discovery that cocaine could cure hunger, thirst and depression and even make people feel great and more sexual.  He couldn’t wait to announce this new wonder drug to the scientific community, and published “On Coca” in June 1884. In his paper, he claimed that cocaine was safe and could be used to treat depression and sexual problems.  This led to the development of many popular patent medicines containing cocaine and to his red, wet nose from all the cocaine he took.
Shortly after publishing his paper, Freud noticed that cocaine numbed his lips after he drank it. He wanted to see what would happen when he put a cocaine solution into patients’ eyes before surgery.   Freud told an ophthalmology intern named Carl Koller about his discovery and together they showed that cocaine could be instilled into the eye to block pain during eye surgery. When Freud was out of town visiting his future wife, Martha, Koller published Freud’s discovery without putting Freud’s name on the paper, so Koller became known as the discoverer of the first local anesthetic for eye surgery. When Freud returned, he became distraught because his great discovery had been stolen from him.  Freud was able to get off cocaine in his thirties, at the time of his father’s death in 1886. Many years later he dedicated a reprint of one of his articles to his old friend, “Coca Koller.”

William Halsted (1852-1922)
Halsted was the founding surgeon at Johns Hopkins Hospital who developed aseptic surgical techniques and introduced several operations including the radical mastectomy for breast cancer.  Halsted studied cocaine by sniffing it and injecting the drug into his arms.  He claimed that it helped to keep him awake during his long hours in the operating room.  Many of his students and colleagues thought that he was eccentric because he was frequently late for appointments and had periods when he would not talk to colleagues. He refused to look people in the eye because his dilated pupils might be interpreted as a sign that he was on cocaine.  Halsted came from a rich and aristocratic family and continued to take cocaine for 38 years, until he died at age 70 in 1922. Cocaine is still used as an anesthetic and vasoconstrictor in otolaryngology and emergency rooms today.

Sir Arthur Conan Doyle (1859-1930)
Doyle was a British physician and writer best known for his fictional master detective, Sherlock Holmes. Doyle’s famous character was a perfect example of a brilliant person who has Asperger’s syndrome, even though that syndrome was not described in the medical literature until 57 years later (Lancet, 1944). Asperger’s symptoms that Sherlock Holmes displayed include:
• difficulty making friends,
• long-winded, one-sided conversations,
• insensitivity to other people’s feelings,
• egocentricity, and
• lack of interest in other people’s opinions.
Detective Holmes is asexual with no girlfriends, he smokes pipes, cigars and cigarettes compulsively and snuffs tobacco from a jeweled snuff-box, is a connoisseur of fine alcoholic drinks and he injects a seven percent solution of cocaine into his veins.  He did not use cocaine to help him solve cases; he used it to dispel boredom when he had nothing to do.  Dr Watson unexpectedly first meets Sherlock Holmes when he is disguised as an old man sitting in an East London opium den. In several of the novels Watson, who has become his only friend, warns Holmes that use of this drug may harm his career and ruin his health. Holmes responds that he uses cocaine to give his brain a rest from solving difficult crimes. Eventually, Watson convinced Holmes to stop taking cocaine. 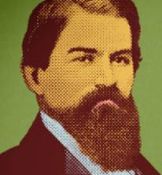 John Stith Pemberton (1831-1888)
John Stith Pemberton was a pharmacist in Columbus, Georgia, who had become addicted to morphine when he was wounded during the Civil War.  In 1866 he began to try non-opium painkillers to help him cure his addiction. At that time cocaine was readily available in tablets, injections, wine and coca-leaf cigarettes.  He experimented with coca wine, a popular alcoholic beverage that contained cocaine, and created his own patent medicine concoction that included cocaine, alcohol and various herbs, which he called Pemberton’s French Wine Coca.    Pemberton bottled it and sold it as a nerve tonic to “help relieve stress caused by living in the modern world” — among many other medicinal claims.  It sold very well in Atlanta until the city banned the sale of alcohol in 1886, which forced Pemberton to remove the alcohol from his “medicine.”
With his business partners Frank Robinson and others, Pemberton came up with a new formula that included coca, kola nuts (a source of caffeine) and carbonated water.  Robinson named it Coca-Cola to tout the medicinal benefits of its main ingredients, and wrote the name in the distinctive script that is still used today for one of the most widely recognized trademarks in the world.   Unfortunately, most people did not like the non-alcoholic drink and sales dipped dramatically, so they sold the patent to an Atlanta druggist for a measly $2,300 ($60,000 in today’s dollars) shortly before Pemberton died.  The drink tasted really awful, so the new owner, Asa Griggs Candler, added sugar and sales picked up dramatically.  Candler’s  advertising still made some medicinal claims, but focused more on promoting “the new and popular soda fountain drink.”
In 1906, the U.S. Pure Food and Drug Act was passed and cocaine was removed from Coca-Cola.  In 1914, Congress passed the Harrison Narcotics Act that regulated and taxed those who produced, imported and distributed opiate drugs including opium, morphine, heroin, and codeine, as well as cocaine.  In 1922, the Jones-Miller Act effectively ended the legal distribution of non-prescription cocaine.
Coca-Cola is now the world’s most widely distributed single product, is sold everywhere except North Korea and Cuba, has more than 40 percent of the market share of sodas and is the second best-known word in the English language (after the word “Okay”).   Today’s Coca-Cola contains no cocaine and no alcohol, but it still has lots of caffeine and sugar, making it a favorite energy boost for bicycle racers and other endurance athletes.